NYC mayor’s message to Trump: Huge Black Lives Matter mural that President called a ‘symbol of hate’ is painted on Fifth Avenue right outside his home in Trump Tower 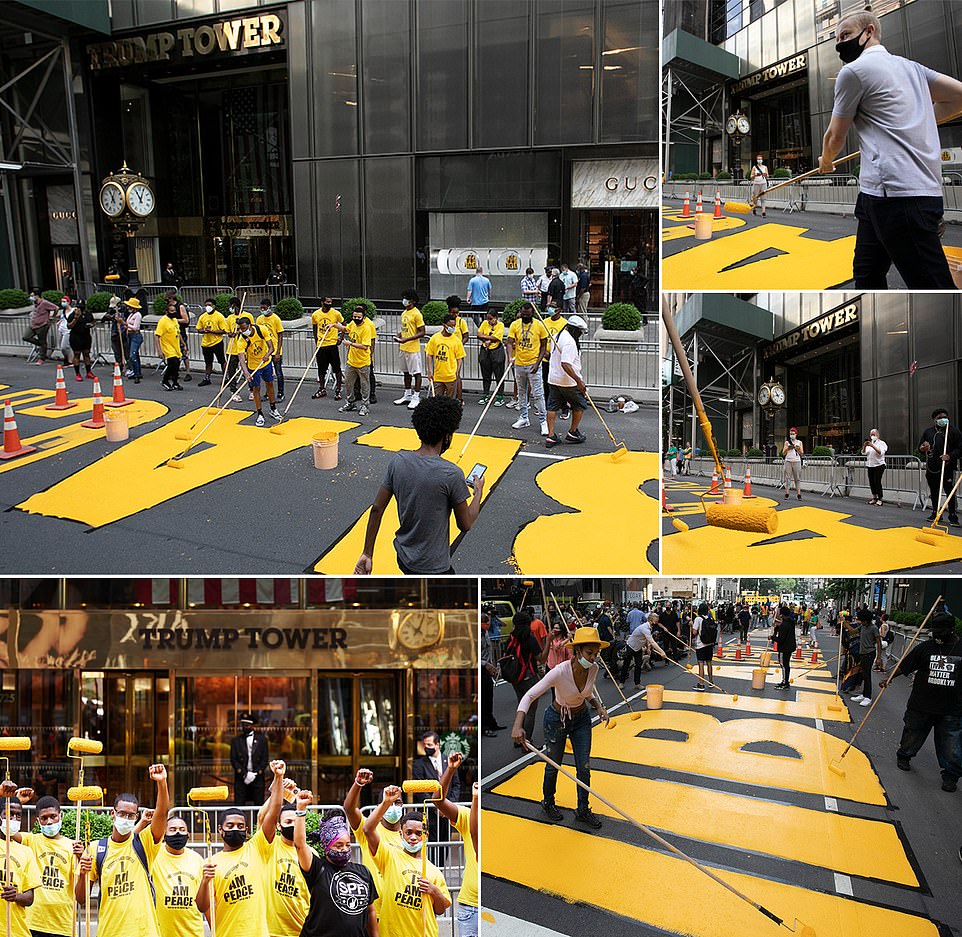 Work has begun on the ‘Black Lives Matter’ mural outside Trump Tower on Fifth Avenue. New York City Mayor Bill de Blasio had last week temporarily called off the painting just feet from the U.S. president’s former home. On Thursday he was pictured helping to paint the mural, tweeting: ‘Our city isn’t just painting the words on Fifth Avenue. We’re committed to the meaning of the message.’ 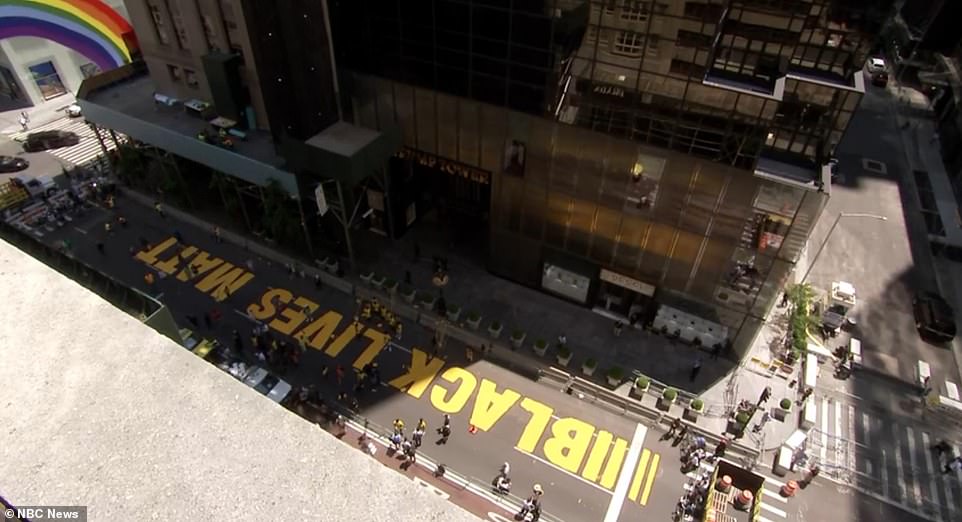 The earlier postponement came after President Trump and Mayor de Blasio engaged in a Twitter spat over the mural on July 1 with Trump branding it a ‘symbol of hate’ and demanding the money for its creation be spent on the NYPD instead. Its painting came on the same day the Supreme Court dealt a stunning blow to the president by ruling that his bank and his accountants must hand over his tax returns that New York prosecutors had demanded. The court ruled 7-2 that Trump is not immune as president from subpoenas, in an opinion that tested both the power of local prosecutors and Congress to obtain information. 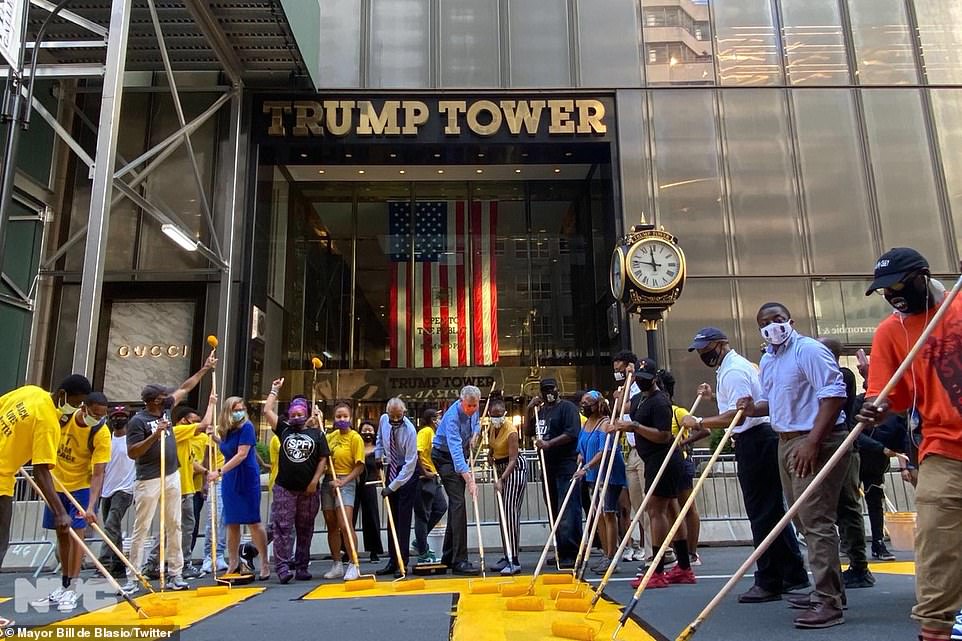 Mayor Bill de Blasio was pictured helping to paint the mural, tweeting: ‘Our city isn’t just painting the words on Fifth Avenue. We’re committed to the meaning of the message’. 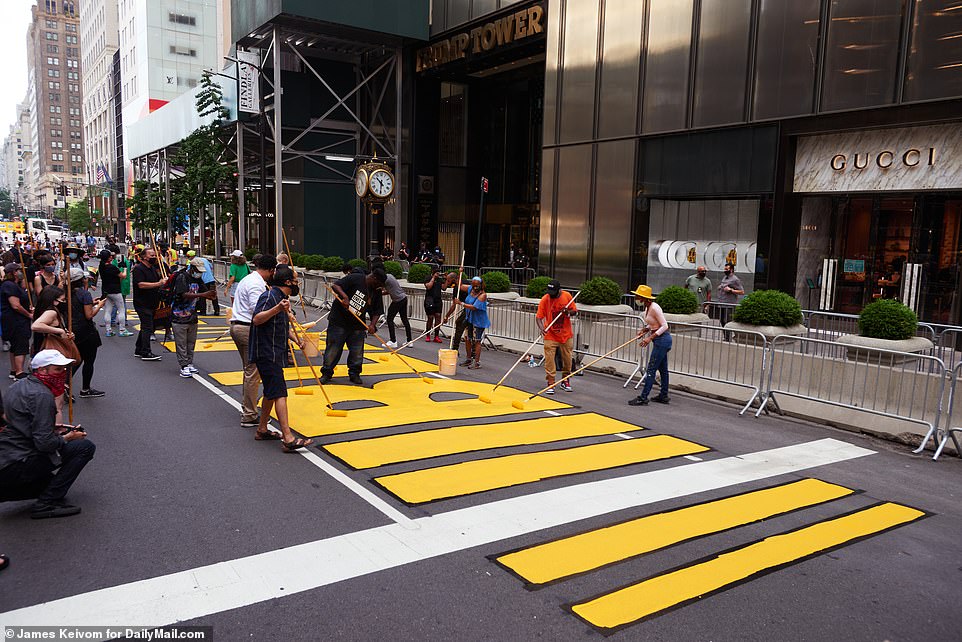 Trump has not yet reacted to the mural but immediately responded to the Supreme Court decision, slamming the justices and claiming he was being singled out by them tweeting: ‘Courts in the past have given ‘broad deference’. BUT NOT ME!’ Pictured, people participate in painting a Black Lives Matter mural on 5th Avenue between 56th and 57th Street on Thursday. 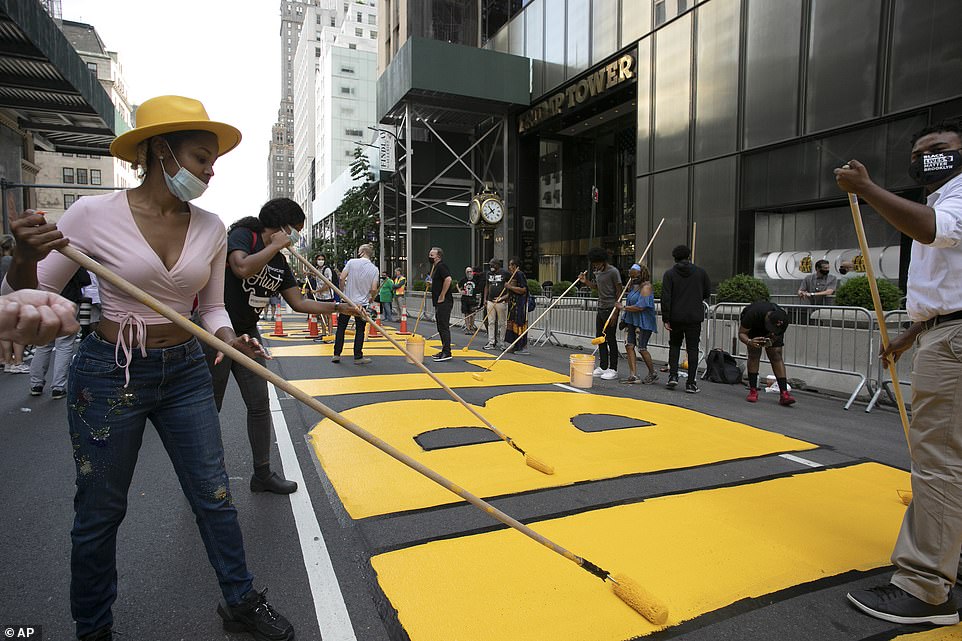 It is believed the mural will take one hundred gallons of paint to create and will close off traffic by Trump Tower for a number of days. Azia Toussaint, left, participates in the painting of Black Lives Matter on Fifth Avenue in front of Trump Tower, Thursday. 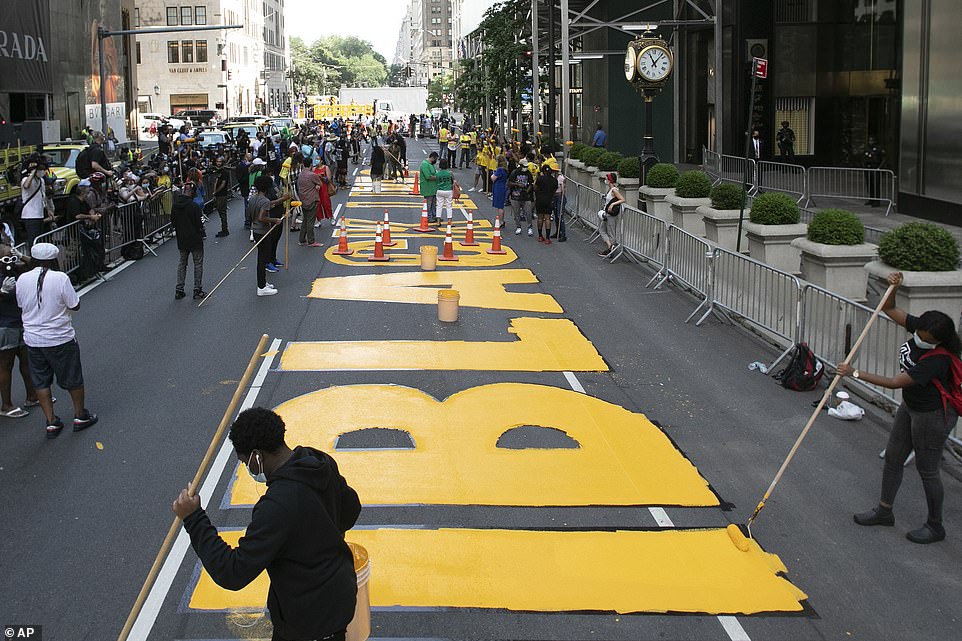 De Blasio appeared on MSNBC’s Morning Joe to provide an update on the mural’s creation, nearly a week after he first unveiled plans for the words to be painted down Manhattan’s Fifth Avenue. ‘Whenever Trump comes back to his old state (New York), he’ll get a message that he still doesn’t understand. Maybe seeing outside his doorstep will help him get the point,’ de Blasio grinned. 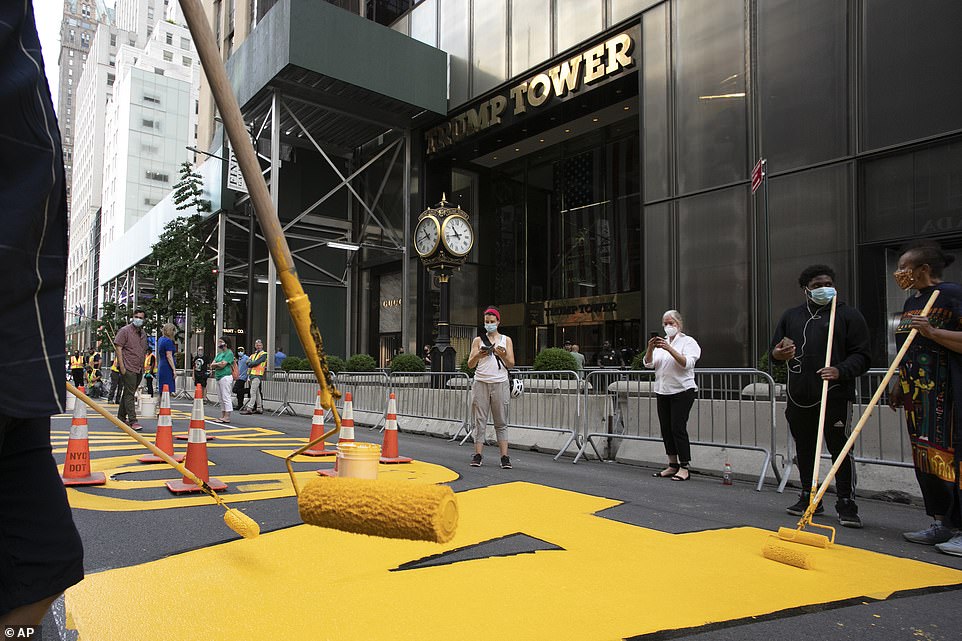 Trump didn’t take kindly to de Blasio’s taunt, taking to Twitter to lash out at the mayor, who had overnight slashed the NYPD budget by more than $1 billion. ‘NYC is cutting Police $ by ONE BILLION DOLLARS, and yet the @NYCMayor is going to paint a big, expensive, yellow Black Lives Matter sign on Fifth Avenue, denigrating this luxury Avenue,’ the President blasted. ‘This will further antagonize New York’s Finest, who LOVE New York & vividly remember the horrible BLM chant, ‘Pigs In A Blanket, Fry ‘Em Like Bacon’. Maybe our GREAT Police, who have been neutralized and scorned by a mayor who hates & disrespects them, won’t let this symbol of hate be affixed to New York’s greatest street. Spend this money fighting crime instead!’ 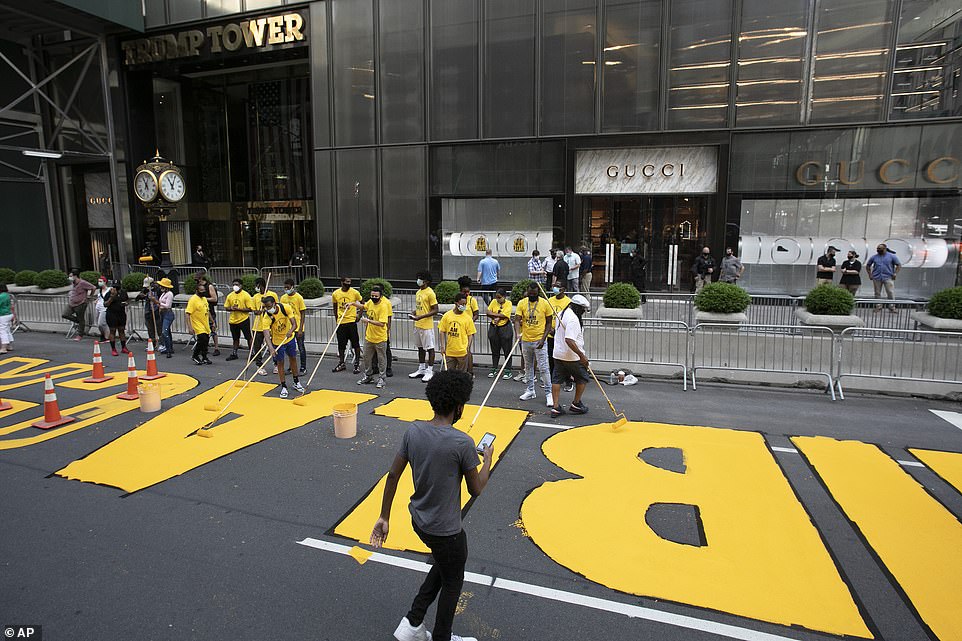 De Blasio responded directly to Trump’s tweet, calling it the ‘definition of racism’. ‘Here’s what you don’t understand: Black people BUILT 5th Ave and so much of this nation,’ de Blasio wrote. ‘Your “luxury” came from THEIR labor, for which they have never been justly compensated. We are honoring them. The fact that you see it as denigrating your street is the definition of racism. 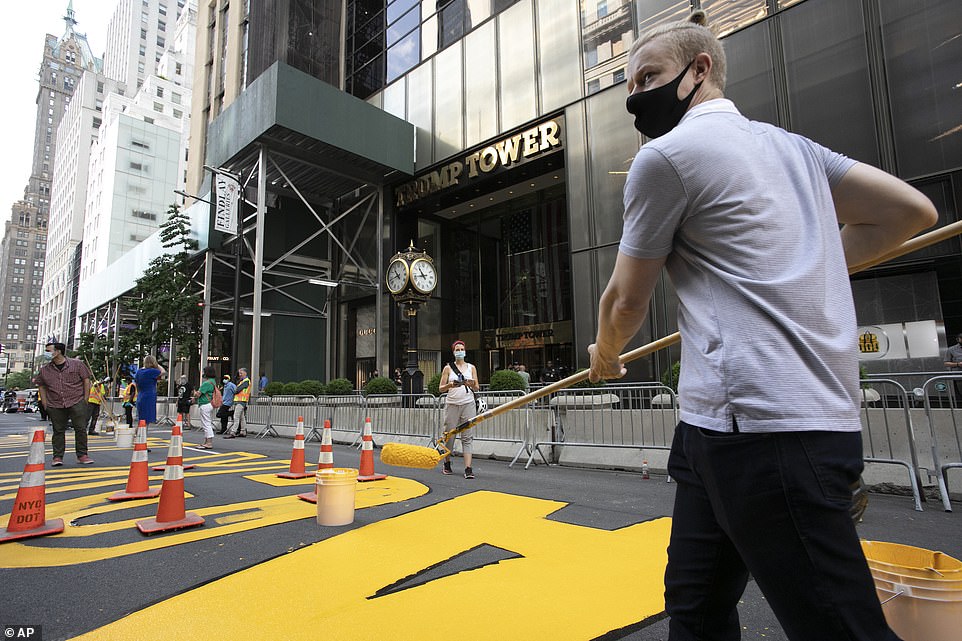 ‘You also don’t know that NY’s Finest are now a majority people of color. They already know Black Lives Matter,’ de Blassio continued in a second tweet. ‘There is no “symbol of hate” here. Just a commitment to truth. Only in your mind could an affirmation of people’s value be a scary thing.’ 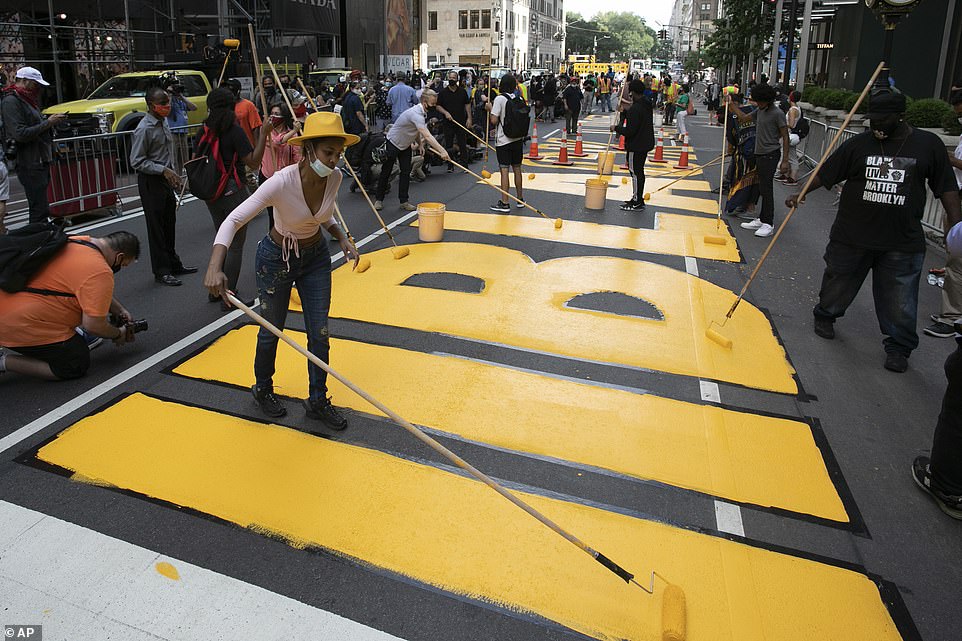 New York Governor Andrew Cuomo also weighed in, according to NBC New York , supporting the mural in general but criticizing de Blasio for NYPD budget cuts amid a recent spike in violence in the Big Apple. He claimed the goal was just to appease protesters with budget cuts but the move won’t actually reform the police department. ‘Now it’s about making the actual change. Not just saying to the protesters, “I’m with you”,’ Cuomo said. 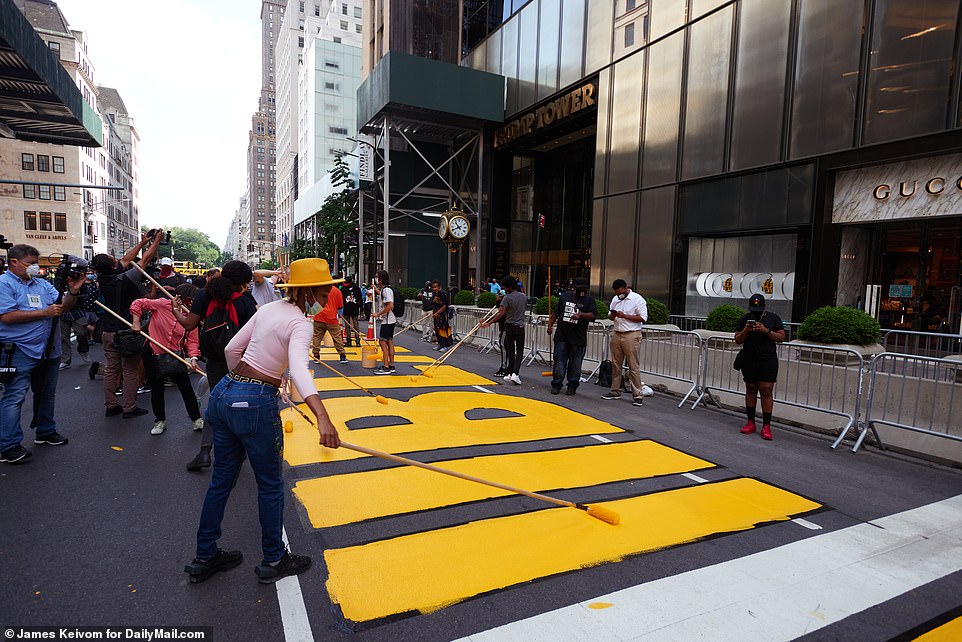 De Blasio’s NYPD budget cut will cancel the recruitment of 1,163 new officers, strip $484million from the overtime budget and transfer $354million to other services. The contentious budget passed the City Council with 32 votes in favor and an unusually large 17 votes against just ahead of the midnight deadline following hours of delays. New York is following in the footsteps of Washington D.C., which had the street leading to the White House painted with a ‘Black Lives Matter’ mural on June 5.