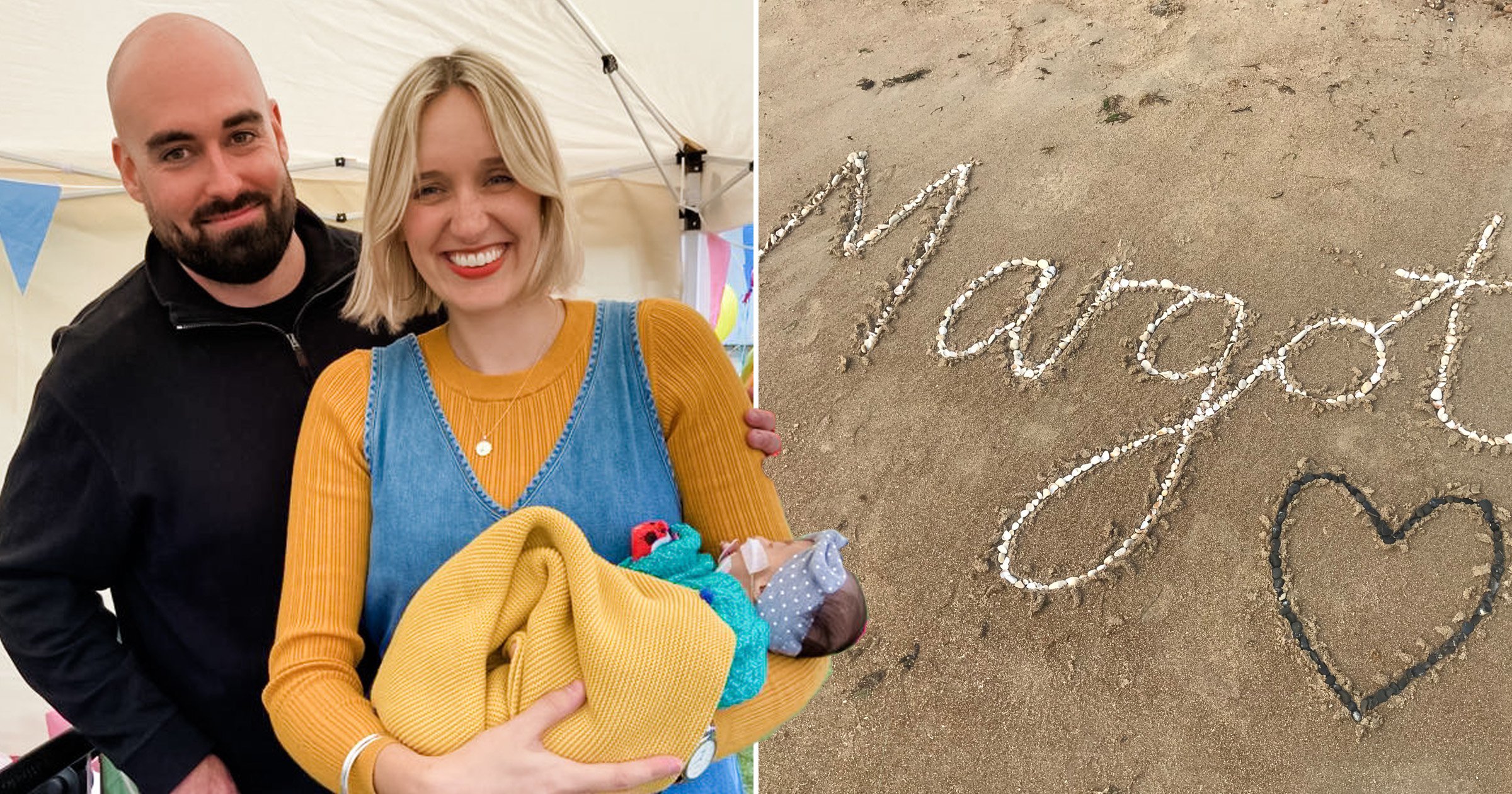 ‘We thought we could deal with whatever’s thrown at us,’ remembers Jodie, 33. ‘But then, when we heard a doctor say the words “life-limiting”, we had the rug pulled out from under us.’

Just 10 days after Jodie and her partner Jamie, 35, welcomed their baby, Margot, they were told the newborn wasn’t expected to live beyond her first birthday.

Margot had Trisomy 18, also known as Edwards Syndrome, a rare non-genetic condition that causes most sufferers to be stillborn.

‘We were aware that things weren’t quite right,’ Jodie tells Metro.co.uk. ‘We now know Margot had very typical physical features of a child with Edward’s syndrome: clenched fists, hammer toe, clubbed feet, low set ears, a small jaw, all things that are textbook features, so it is quite baffling no one saw any of those things.’

On July 16, 2020, Jodie was booked in for an induction, unaware that her child was seriously unwell.

When Margot was put into an incubator immediately after her delivery, Jodie and Jamie were busy getting excited about the birth of their first child.

But then doctors returned looking ‘ashen’.

Jodie remembers: ‘I thought she’d died. Then a doctor said she had some concerns but wasn’t definitive about what those were. You think of all the worst case scenarios and we knew something was quite wrong.’

A few days later, doctors discovered that Margot had been born with a severe condition, and broke the news to the new parents.

‘It was completely shocking and devastating,’ says Jodie. ‘We knew there was something, but what we hadn’t prepared for was the condition she had to be life-limiting.

‘It was a lot to take in and then just being left with this A4 sheet of paper from the internet, thinking… What happens now?

‘You latch onto hope – you do think my child might be one of the exceptions to the statistics.’

Over the next four weeks Margot remained in the hospital, with Jodie and Jamie in and out of the ward.

It’s an environment Jodie remembers as being a place ‘where time stands still’.

‘We felt very connected to our daughter and love her, but there was a disconnect because you’re having to leave your child on their own and it didn’t feel like she was ours when we had to ask for permission to hold her,’ she says.

While in an incubator, Jodie felt deprived of those ‘first new born moments’.

Under close watch, Margot received special treatment, at risk of dying at any moment.

‘We did have frank medical meetings where we were told: “Your daughter’s not going to smile, she’s not going to crawl, she won’t feed”,’ recalls Jodie.

After week four, the decision was made to let Margot leave the hospital for her final few weeks.

The couple had to learn how to feed her alone, were assigned hospice support, and Margot was gently weaned off of the machines that she’d be without while in the family home.

It was at this stage that the new parents formed some of their most precious memories with their baby, as they decided to take Margot out for a ‘normal’ day.

‘We took her shopping and sat and had a lunch, my husband and I,’ Jodie says. ‘It wasn’t without its drama, seeing people give you looks because you’ve got a big oxygen tank strapped to the bottom of your pushchair.’

Knowing that their child would soon leave them, the parents were able to enjoy – for one brief moment – the simple activities of putting her in a car seat and going for a drive, pushing her in a pram, changing her in a public toilet, and introducing her to their pet dog.

‘We also had a “welcome to the world” picnic with friends and family, though we nearly didn’t do it,’ Jodie tells us.

‘That felt like a difficult battle because while we wanted everyone to meet her, we felt like we want to enjoy her ourselves.’

Hosting the picnic was important, as ‘the thought of her only celebration being a funeral was so so heartbreaking’. The parents decided to make the day ‘all her birthdays and Christmases combined’.

‘We had balloons and cake and party bags for other children. It was just a really happy day and an opportunity to celebrate her, but not in the way you would at a funeral.’

On September 4, at just 50 days old, Margot passed away at home.

The couple were given a cold cot, otherwise known as a cuddle cot, which allows parents to be with their child that bit longer, as it prevents the baby’s body from going through its natural changes quite so soon after dying.

Since then, it’s been a time overloaded by emotions.

‘It’s challenged our relationship,’ Jodie says of her marriage, ‘it bonds you but simultaneously pulls you apart.

‘It’s really a very unique and bizarre experience. You’ve gone through something life-changing, but when you’re grieving and not always doing things at the same time or same way, it is challenging.’

Looking for ways to process her grief, Jodie set up an Instagram account to write about how she was feeling.

‘Because I felt so frustrated with the people that I knew and were in my life, I started to write it down my experience and how I was feeling,’ she says.

‘Off the back of that I’ve been in contact with other parents, mainly mothers, and I’ve made a good friend with another mother who lost her daughter – that relationship has been invaluable.

‘To have the shared experience, that’s the only place where you can truly share everything and the other person really understands.

‘Not having Margot and dealing with her not being here and living the life we thought we were going to live is one side, but then this other side shatters everything. It’s like a ripple effect. Everything’s changed.’

This is why Jodie decided to take part in the You Are Not Alone project, an online exhibition created by charity Same But Different for Baby Loss Awareness Week. It’s hoped that by getting involved, Jodie will help show others they are not alone in this heartbreaking experience.

‘You can’t be the same person as you were before, it’s just different,’ Jodie adds. ‘Everything around you is the same and other people are the same and I think that’s what’s been really challenging – other people carrying on and moving forward with their lives, navigating all of that.

‘It’s a very lonely experience and while you know there are hundreds of thousands of other parents that have experienced baby loss, when you’re within your own circle, unless someone’s been in your shoes it’s hard for people to truly empathise.’

She hopes that the more people become aware of baby loss, the more able they’ll feel to provide support in any form to those going through it.

‘I think in those early days when your baby’s died, people’s uncomfortableness and not knowing what to say… The silence from people is so incredibly painful,’ notes Jodie.

‘If you don’t know what to say, say something. People worry they’ll say the wrong thing, but you don’t need or want silver linings, you just want basic “we’re here”.

‘You don’t have to be in the inner circle to reach out – it’s not too late.

‘There’s no end point to grieving the loss of your child. It’s something you live with always.’

Dr Alison Kay, who works for charity Same But Different, says: ‘Baby loss can be isolating and friends and family don’t always know what to say or do.

‘People grieve differently. You’ll journey through baby loss in your own way and in your own time but there are people who can guide you and help you to find a pathway forward for living with your loss.

‘You may feel that you’re not ready to come to terms with your baby loss, or perhaps you’re ready but don’t know where to start.

‘Wherever you are in your experience of baby loss, it can be very helpful to explore the different types of support and resources that exist, including the Sands UK helpline 0808 164 3332 / [email protected] There are also additional resources available here.’

To chat about mental health in an open, non-judgmental space, join our Mentally Yours Facebook group.