Anyone who has spent time with stationery knows the underestimated strength of humble office materials. Packing tape, sufficiently layered, is strong enough for a man to hang from. And if you didn't know this, you will by the end of Branch Nebula's mesmerising new show.

Branch Nebula – co-founded by performer/director Lee Wilson and Belgian designer Mirabelle Wouters – comes out of the grand tradition of contemporary performance companies that have emerged from Sydney's Performance Space since the mid-1980s. 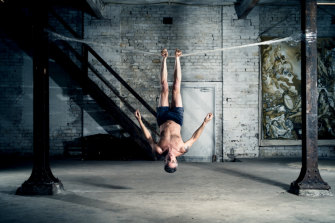 Like its peers (think Sydney Front as a starting point, and Team Mess or Appelspiel as more recent additions), Branch Nebula works with non-fictionalised performance events on a literal stage where the action points only to its own realness. 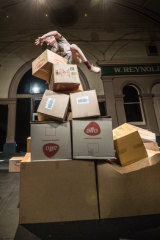 What makes the duo's work distinctive is the combination of Belgian-inflexed pop/quotidian sensibility and Wilson's epic physicality.

The whole set is miked, effectively creating drama as everyday materials are tested for endurance. It opens with a balloon exploding in Lee's mouth; the powerful eruption makes the whole audience gasp.

Every squeak and tear resounds as Wilson balances on stacked cardboard boxes, piles up chairs on balloons, or walks on a tightrope made of packing tape. It plays out almost like a circus show; accordingly, the audience is compelled to applaud at the resolution of each scene.

This is quintessential "poor theatre" using an absolute economy of means to create tension. The effectiveness of the set-up is hidden in plain sight until the very end, when the tension is finally released and the audience erupts in applause. Highly satisfying.