An Olympic cyclist used his headphones as a leash to bring a lost dog back to its home safely earlier this week.

On Monday, Owain Doull was on a training ride in Derbyshire, England, when he found the pooch without its owner, according to The Independent.

He then used his headphones as a makeshift leash, tying one end to the collar and holding the side with the earbuds while he biked the dog home.

Doull posted a video of the walk on Twitter saying the dog, named Bolt, made it home safely.

“Top Tip of the day, if you happen to find a lost dog while out on your bike headphones double up as a great lead,” Doull tweeted. “Managed to get Bolt home to his farm in one piece.”

“Thanks Owain,” Harvey wrote. “Bolt’s exhausted and pleased to have met a new friend.”

Doull told The Independent that he found Bolt’s owner’s address and phone number from his collar. 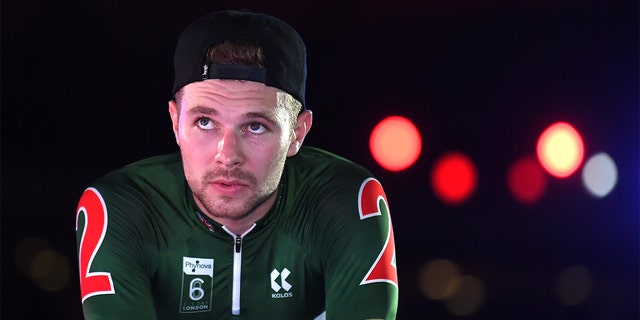 Owain Doull is pictured in 2019. On Monday, he brought a lost dog home using his headphones as a makeshift leash.  (Photo by Alex Davidson/Getty Images)

“I found him on the side of the road, shivering and looking a bit lost,” he told the British newspaper. “I tried to call the owner but had no response and the signal isn’t great around there. So I chucked the address into my phone and it was only a kilometer up the road.”

“I’ve never met such a responsive dog in my life,” Doull added.

Doull, 27, is a Welsh track cyclist who won a gold medal in men’s team pursuit at the 2016 Olympics in Rio de Janeiro.

He currently cycles for Team Ineos, based in Manchester, England.