The Sydney Opera House has raised the public curtain on its $150 million-plus transformation of the Concert Hall, a project that brings the monumental performance space closer to Jorn Utzon’s original vision while catering to a new generation of hip-hop, pop and rock audiences.

Once derided by the actor John Malkovich for its “hideous” acoustics and “continent-sized” stage, the new acoustically enhanced Concert Hall is the final project in the Opera House’s renewal ahead of its 50th birthday celebrations in 2023. 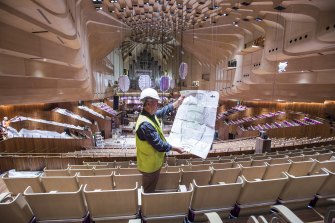 Simone Young will lead the Sydney Symphony Orchestra back on stage on July 20, two years after the hall shutdown for the renovation.

World-leading acoustic treatment has been installed to tackle the long-standing complaints of poor sound quality and to bring the premier concert space up to leading standard for amplified music and electronic sets. Automation of stage draping, stage rises and acoustic curtains will permit a quicker, more efficient turnaround of shows as the Opera House continues to diversify its concert and theatre offerings.

A total of 174 tonnes of reinforced steel, equivalent to 100 medium-sized cars, has been placed into the ceiling of the refurbished hall to upgrade theatrical rigging and winch systems that will now be capable of carrying heavy light banks and LED walls. The stage has been lowered and given wider wings so that grand pianos can seamlessly roll through. Wheelchair access has also been upgraded, and it’s now possible to bypass the Opera House’s banks of stairs. 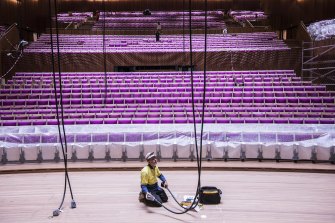 “The sorts of works we want to put on artistically are very different now from what was planned for the late 1960s when all of this was installed,” Herron said.

“The Opera House is the symbol of the nation and it is where we want to put on classical music, of course, and to be the best classical music venue that we can possibly be. But equally we want to be able to switch modes so that we’re able to show contemporary performance. Our contemporary music concerts are such a hit and we put on circuses and magic shows and all sorts of family programming.” 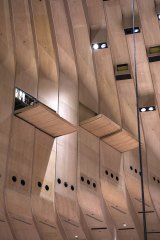 Gone are the 21 donuts that were deployed at half ceiling height to suppress and dampen echoes. Two will be preserved for posterity and several offered to the families of original people involved in the design of the Concert Hall and their manufacture.

In their place are 18 petal-shaped fibreglass discs that act as acoustic reflectors. Panels of Tasmanian brush box bearing ripples that graphically represent the music note Middle C have been installed in the box fronts and upper circle. With new wooden reflectors affixed to the Concert Hall walls, sound will be distributed more evenly to the hall’s rear seats.

Utzon conceived the Concert Hall as a multi-purpose music venue for opera and ballet with a cavernous ceiling for rigging, but when he departed opera and plays moved to the Joan Sutherland Theatre while the Concert Hall was reserved for classical music. At 45 metres, the hall is at least 10 metres longer than similar sound-sensitive spaces, and twice the desired height.

“The problem with the Concert Hall is when you are playing on one side you can’t hear the musicians on the other side,” NSW arts minister Ben Franklin said. “That’s exactly what these design features are going to address.”

The Government contributed $234 million to the Concert Hall renovations, its new Centre for Creativity, refurbished function and events centre and Joan Sutherland Theatre upgrades, with the Opera House contributing more than $50 million from its own cash reserves.

COVID played havoc with the Concert Hall’s completion dates, causing multiple shutdowns of the construction site, and sidelining the arrival of specialist stage machinery from Austria.

“Two weeks ago the whole Waagner Biro [engineering] team including the head project engineer arrived with COVID and sat in a hotel for a week,” Herron said. “I just can’t tell how on a knife edge we’ve been because every time we set a new program, external factors that wouldn’t normally be part of a project of this nature have interfered, and meanwhile the Opera House has been operating.”