Gosh it's good to have a locally produced series to get excited about. Not just because 2020 was a lacklustre year for local drama and comedy. Not just because the already fragile local industry is reeling from the COVID crisis and could use some applause. And not just because Stan's new year releases have tended to be a lot less inspiring.

The excitement also comes because the 10-part Bump is a joy and it affirms one of the country’s most impressive screen partnerships in writer-producer John Edwards and actor-writer-producer Claudia Karvan. Although they've worked independently of each other extensively, their projects together represent some of the finest contributions to Australian TV drama in the past 20 years: The Secret Life of Us, Love My Way, Spirited and Puberty Blues. 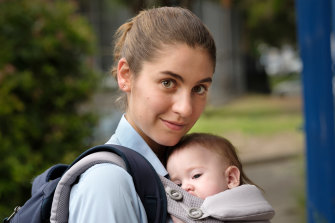 Edwards (Police Rescue, Rush, Tangle, Offspring) has long been a dynamic and accomplished storyteller with a gift for casting. Karvan (High Tide, Newton's Law, Halifax: Retribution) has grown from a teen actress into a luminous and versatile performer and an astute producer who isn't only involved in projects that might bring her starring roles, as Doctor Doctor attests.

Their recent collaboration inspires confidence from its deft opening scenes. A wealth of carefully curated information about the key characters is conveyed without a line of expository dialogue being delivered.

So we're invited to see that Oly is a keen student, that Angie is excited about seeing someone who probably isn't her husband and that their marriage might be in trouble. When Oly bursts in to demand that Angie turn down the music because she's trying to finish an assignment and there's subsequently a terse exchange about Oly's missing childhood comfort toy, er, "transitional object", we also learn that it's not always smooth sailing between mother and daughter and that Oly is caught in that turbulent adolescent space between childhood and adulthood. 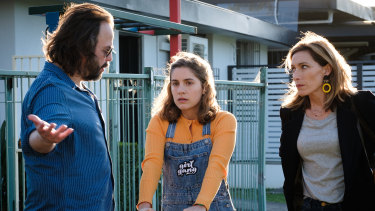 One of Bump’s many pleasures is the way in which it upends expectations, steering away from cliches and smashing stereotypes. It's the smart, studious girl, rather than a rebellious outcast, who discovers to her horror that she's pregnant. The sporty schoolboy, frequently reduced to a jock type, turns out to be a natural with babies. The bearlike man-child husband is proactive, perceptive and has a big heart.

Another of the comedy-drama's assets is its effortless diversity. Without appearing contrived or tokenistic, Bump looks and sounds like contemporary Australia, from the boys that Oly is involved with, studious boyfriend Lachie (Peter Thurnwald) and soccer star Santiago (Carlos Sanson Jr), to their friends, the teachers working at the high school with Angie and the hospital staff.

The production also feels fresh and vibrant as it makes unconventional choices. Sampson, for example, is a terrific actor who can be relied upon to put a surprising spin on his delivery. But he’s frequently cast in less prominent supporting roles, as he was in Edwards' political drama Party Tricks.

Not only does Bump look like a country that we can recognise, but its characters talk like people we might know rather than characters trying to convey information designed to fill in plot points or move a story along. When Santiago's Chilean family members talk to each other, they speak in Spanish and are subtitled. 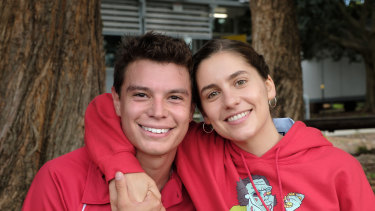 The dialogue is smart, sharp and sparing. When Oly complains, after the shock arrival of her daughter, that men seem to get out of the birth business relatively unscathed while she's literally torn up and bleeding, Angie responds with a knowing shrug, "I know, biology's a bitch".

The prickly, push-pull tussle between mother and daughter is beautifully evoked. The glance from Oly towards Angie, who's sleeping in a chair beside her daughter's hospital bed, speaks volumes.

Created by Kelsey Munro with Karvan, Bump has at its heart a humane view of generational messiness: teenagers and adults struggle, sometimes gracelessly, with life and its challenges. Everyone makes mistakes and there are surprising moments of disarmingly honest communication and rewarding connection.

As it follows Oly's negotiation of her new and unanticipated role, the series folds in a range of related issues with impressive fluidity: her fears about how she'll be regarded by her friends and classmates, the concerns about how motherhood will affect her ambitions for her future, the practicalities of taking a baby to school, the way in which the new arrival brings together two very different families.

Bump presents an array of decent people muddling along, trying their best, sometimes stuffing-up and apologising. As a bonus, there’' a beautifully developed, topsy-turvy love story.

While Stan has been commendable among the subscription video on demand services for the level of its investment in local production, its record with summer releases has been spotty, with the streamer previously favouring grim, dark and dystopian productions (Romper Stomper, Bloom, The Gloaming, The Commons). Bump indicates a welcome shift and the announcement of a second season so soon after its premiere suggests that everyone's happy with the change.

Find out the next TV shows, streaming series and movies to add to your must-sees. Sign up to get it every Thursday.