Netflix’s subscriber growth slowed dramatically in the second quarter as the surge in streaming subscriptions from the COVID-19 pandemic petered out, competition increased and the company considered novel ways to grow its business.

The California-based streaming giant added a mere 1.5 million new paid members globally in the second quarter, which is down 85 per cent from the same period a year ago, when it reported 10.1 million subscriber additions.

The firm also added 61 per cent fewer subscribers than it did in the first quarter, when the company missed projections with 3.98 million new accounts. In the US and Canada, Netflix lost about 430,000 paid memberships in the second quarter.

Although down significantly, the results were better than the 1.15 million subscribers Wall Street analysts had expected, according to FactSet.

Pandemic restrictions drove millions of people to sign up for Netflix subscriptions to binge-watch their way through the public health crisis, resulting in record numbers for the company.

But with in-person entertainment options open once again, analysts anticipate people will spend less time with Netflix than earlier in the pandemic. Restrictions also delayed the production of movies and TV shows that typically fuel Netflix’s growth.

Meanwhile, competition in the so-called streaming wars has heated up with the growth of streaming platforms including Disney+ and WarnerMedia’s HBO, which are trying to attract users and filmmaking talent. Netflix downplayed the effect of rivalries, citing Nielsen research saying that streaming represents just 27 per cent of U.S. TV screen time, giving the company plenty of room to grow.

However, analysts said the competition has put some pressure on Netflix as it tries to defend its position as the biggest streaming company, now with more than 209 million paid members.

“Competition in the US seems to finally have arrived in meaningful form given the backdrop of so many new streaming apps and the Discovery and Warner Media merger, as Netflix has actually lost subscribers in the US and Canada region for the first time in many quarters,” said Joe McCormack, senior analyst at investment research firm Third Bridge in New York, in an email.

Netflix forecast the third quarter would bring in 3.5 million subscribers. Shares declined slightly in after hours trading, after closing Tuesday at $US531.05 ($724) per share. 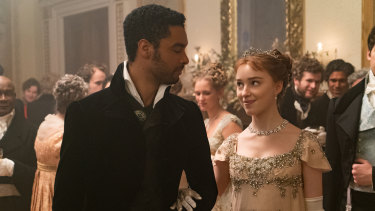 With subscription growth slowing, streaming services are trying to grow by spending billions on exclusive movies and TV shows to draw viewers and get them so addicted they don’t cancel.

The company is spending big on content to shore up its position in the increasingly crowded field of streaming video as competitors including Disney+, Hulu and HBO Max try to take market share. Netflix has said it plans to spend $17 billion on content this year.

Although detractors say the company’s firehose strategy of producing content prioritises quantity over quality, the service has created plenty of buzzy shows that have garnered critical acclaim.

Netflix scored 129 Emmy nominations for its shows, including best drama series nominees Bridgerton and The Crown, along with nods for Cobra Kai, Emily in Paris and The Kominsky Method. Netflix was barely topped by WarnerMedia’s combined 130 nomination for HBO and HBO Max.

Netflix must rely more on original content as rival entertainment companies bring more of their shows and movies back home to put on their own streaming services. Popular series such as Friends and The Office once were big draws for Netflix. Not anymore.

Co-chief executive Ted Sarandos said on a interview broadcast on YouTube that the company copes with the loss of popular licensed studio programming by creating exciting originals.

“We go through that we believe by making these early investments in original programming and getting our consumers and our members much more attuned to the expectation that we’re going to create their next favourite show, not that we’re going the be the place were you can get anything every time,” Sarandos said. 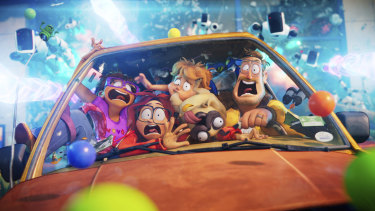 The Mitchells vs The Machines is Netflix’s most-watched original animated movie to date. Credit:Netflix

Among the top films on Netflix during the quarter were Zack Snyder’s Army of the Dead, the Kevin Hart-starring dramedy Fatherhood and the family comedy The Mitchells vs. The Machines, which Netflix said was the company’s most-watched original animated movie to date.

Last month, Netflix signed a multi-year deal for Steven Spielberg’s Amblin Partners to supply the streamer with multiple new feature films a year. The deal was notable in part because the relationship between Netflix and the Oscar winner was at one time more strained.

Spielberg had in 2019 intended to propose rule changes at an Academy of Motion Picture Arts and Sciences board of governors meeting that would have required films to play in cinemas exclusively for at least a month to qualify for the best picture Academy Award category. The changes never occurred.

Netflix has moved to diversify its business, as well, with its move into gaming, which the firm confirmed in its earnings report. The company recently hired Oculus and EA veteran Mike Verdu to lead its efforts in gaming. The strategy, Netflix said, builds on earlier efforts in interactive entertainment, including the choose-you-own-adventure Black Mirror: Bandersnatch and Stranger Things games.

“We view gaming as another new content category for us, similar to our expansion into original films, animation and unscripted TV,” Netflix said in its quarterly letter to shareholders. “Games will be included in members’ Netflix subscription at no additional cost similar to films and series.”

The company in June launched an e-commerce website that sells Netflix merchandise and products based on and inspired by shows including The Witcher and Lupin.