Scott Morrison’s hard-won peace on climate change within the Coalition has erupted in the election campaign as prominent Nationals insist the 2050 net zero emissions target is “dead” and criticise the government’s billion-dollar push into hydrogen infrastructure.

The prime minister said his commitment to the 2050 target was “absolute” as he bids to hold vulnerable Liberal seats in Sydney and Melbourne from climate-conscious independents, but his Coalition partners have escalated attacks on the net zero policy, which barely made it through the Nationals party room in 2021. 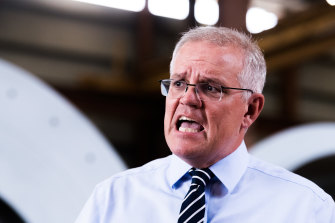 The Coalition announced $275 million in funding for new hydrogen hubs in Townsville and Gladstone on Tuesday, but as Morrison was campaigning on the ground, former Nationals minister Matt Canavan said the hubs weren’t needed and backed new coal plants instead.

Morrison was forced to clarify the Coalition’s policy to achieve “net-zero” greenhouse emissions by 2050 after a Nationals candidate said the deadline was not binding and Canavan declared the target “dead”.

“Our commitment to net zero by 2050 is a commitment of the Australian government that I made in Glasgow. It is the government’s absolute policy,” Morrison said on Tuesday.

The rift opened up between the Liberals and Nationals on the same day one of Australia’s largest coal miners warned that Labor’s emissions policy could amount to a carbon tax on the sector. Whitehaven Coal chief executive Paul Flynn on Tuesday questioned Labor’s plans to impose pollution limits on Australia’s 215 top polluters and force them to gradually lower or offset their emissions over time.

The Nationals candidate in Flynn, a Queensland electorate based around Gladstone, Colin Boyce said over the weekend that the government’s net zero policy was “not binding” and is a “flexible plan” that left “wiggle room as we proceed into the future”. Nationals leader Barnaby Joyce said Boyce’s argument was “understandable”.

Canavan told the ABC international support for net zero “has absolutely gone” and questioned the Coalition’s $1 billion clean energy push into hydrogen power. The Coalition announced $275 million in funding for new hydrogen hubs in Townsville and Gladstone on Tuesday.

“We don’t need hydrogen, hydrogen hubs is not [sic] going to defend us against military bases in the Solomon Islands,” he told Sky News. “We need reliable power now. And that’s why we should be building the coal-fired power stations.”

Boyce said hydrogen technology had problems that are “huge in terms of turning hydrogen into industrial production”.

Five Liberal MPs are under threat in formerly blue-ribbon electorates from well-funded climate independents who are campaigning for stronger emissions reduction targets in Kooyong and Goldstein in Victoria. In NSW they are running in Wentworth, Mackellar and North Sydney.

The Nationals’ position on net zero and hydrogen risks creating the same dilemma that former Labor leader Bill Shorten confronted in the 2019 election, when he was accused of sending contradictory messages to urban and regional electorates. Labor is already accusing the Coalition of hypocrisy over the divisions between the Liberals’ promotion of net zero and the Nationals’ climate scepticism.

Joyce, however, backed the government’s investment in hydrogen and said it could enable an economic transition from gas exports. “We’re going to build up another industry and allow you to choose between the two,” he told the Australian Financial Review.

The Nationals leader only signed up to Morrison’s commitment to net zero after an undisclosed arrangement with the prime minister. The Nationals secured a $20 billion funding package in the March budget and an extra cabinet position.

Labor leader Anthony Albanese promised there would be “no carbon tax” or coal job losses under the Opposition’s more ambitious climate policy, which includes stricter emissions caps for some of the country’s largest polluting businesses.

“It certainly looks as if some in (Labor) want to turn an emissions reporting mechanism into a carbon levy by stealth, all while claiming the policy position is pretty much the same as the existing Government scheme,” Flynn told The Age and the Herald.

“Those two things can’t be true at the same time.”

The Coalition established the Safeguard Mechanism in 2016 to set limits on the 215 biggest industrial polluters that together generate 28 per cent of Australia’s emissions, but to date the limits on polluters were so slight that industrial emissions have increased since the mechanism was established.

Labor’s climate policy would impose emissions caps on these big polluters to drive down national emissions, while it invests heavily to boost renewable energy at the same time.

The political rift follows a split in the mining industry over climate policy. While Whitehaven criticises Labor’s more ambitious climate plans, Rio Tinto earlier this month cut ties with Queensland Resources Council after it expressed concerns about its advocacy for coal. BHP and Origin Energy suspended their memberships in 2020 after the council told Queenslanders to “vote Greens last” at the 2020 state election. The Minerals Council of Australia has said it wants to consult with Labor over its plans.

Whitehaven, a $4.5 billion ASX-listed company, employs 2500 workers spanning four mines across the NSW Gunnedah Basin where it produces power-station coal and steel-making coal to be exported to Asia. The company is developing two other coal projects in Queensland’s Bowen Basin.

Labor climate change and energy spokesman Chris Bowen has promised that the Clean Energy Regulator would “tailor” how emissions-intensive, trade exposed industries like coal were treated under the safeguard mechanism to ensure they were not disadvantaged by an uneven playing field with competitors overseas.

Flynn on Tuesday said it appeared Labor had not previously assessed the impact its emissions policies could inflict on the nation’s coal industry and its workforces.

“The fact the ALP sees such an enlarged role for the Clean Energy Regulator in negotiating with impacted facilities suggests some in Labor are only just beginning to turn their minds to what this policy might look like in practice and what the impacts could be across the economy,” he said.

Bowen said Labor had announced its policy in December, backed by the Business Council of Australia and supported by the Australian Industry Group. He denied it constituted a tax.

“Whitehaven says it is concerned about the Clean Energy Regulator looking at each facility, but that is exactly what it does now. Labor will provide tailored treatment for emissions-intensive, trade-exposed industries. This means Australian industries won’t be impacted by a greater constraint than their competitors overseas,” he said.

Cut through the noise of the federal election campaign with news, views and expert analysis from Jacqueline Maley. Sign up to our Australia Votes 2022 newsletter here.