The makers of the Australian film Buoyancy have put slavery in the fishing industry on screen – and now they're aiming to put it on supermarket shelves too.

The filmmakers have joined forces with social justice organisation Be Slavery Free to call for a one-stop labelling system for all seafood sold in Australia – 70 per cent of which is imported – to identify where it has come from and under what conditions it was caught. 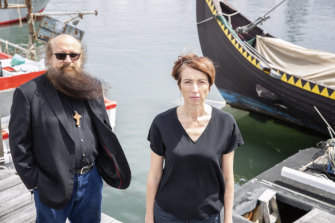 The ultimate aim, they say, is to stamp out the slave trade at the heart of the movie, which was recently announced as Australia’s entrant as best international feature in next year's Oscars.

But producer Sam Jennings admits that, like most Australians, she knew nothing about the issue before reading writer-director Rodd Rathjen's script for a fictional story drawn from the real-life experiences of some of the estimated 200,000 men and boys working in slave-like conditions in the Thai fishing industry.

"I had no idea," says Jennings. "But once we got on board the project we researched it extensively, and interviewed more than 50 people who had been caught up in slavery. Once you hear those stories you can't unhear them."

Buoyancy follows Chakra (Sarm Heng), a 14-year-old Cambodian farm boy who sets off for the city and what he imagines will be a better life only to find himself tricked into the unimaginably grim existence of a labourer on a Thai trawler. 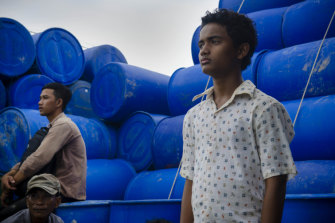 He earns no pay, works up to 20 hours a day, and subsists on a diet of rice, with the occasional scrap of fish meat if his brutal overlord is feeling generous.

Research suggests that of the men and boys who find themselves in such conditions, less than 8 per cent ever make it back home.

"The film we made is probably somewhere in the middle of the stories we heard," says Jennings. "We met people who had been on these trawlers for anything from seven or eight months up to decades. They have no way of getting off; they're just hoping that someone will come and rescue them."

Fuzz Kitto, who has partnered with the filmmakers to launch a petition on change.org "calling on the Australian government to implement a certification standard so we can all know our imported seafood is slavery free", says he once met a man who had spent 17 years in captivity on fishing trawlers.

"He only got to set foot on land again because he had what they call 'black eye' – he had given up, he was useless, so they abandoned him on an island in Indonesia," says Kitto. "There were hundreds of slaves there, and other boats would come in and buy them; it was basically a trading post."

Kitto's organisation, formerly known as Stop the Traffik, has previously run campaigns targeting slavery in the supply chain of chocolate, cotton and tea.

It favours a "collaborative rather than a confrontational approach" and aims to get businesses to work with those elements of its supply chain using slavery to achieve change, rather than simply cutting ties with them.

Change does happen, says Kitto, who cites the case of Thai Union, a major seafood supplier that discovered in 2015 that its supply chain was riddled with unethical practices and set about reforming them.

The company has since won a number of awards for its efforts, and is committed to a policy of “full traceability of all the seafood we purchase".

It is precisely that level of transparency that Kitto and Jennings are demanding on behalf of Australian consumers.

"It's really easy to feel overwhelmed by all the different kinds of labels," says Jennings. "When I go into a supermarket or a shop I want some standardised way to know which suppliers are being vigilant about their supply chains. If there's some simple way of knowing, I do believe people will make choices accordingly."

"We have scrutiny of seafood already with food safety," adds Kitto, "but not with people safety."

A labelling system alone won't guarantee the absolute purity of the supply chain, he concedes. "But it does make it harder for people to use slaves in the fishing industry, and that means we're going to change the culture of the industry."

Buoyancy is screening at selected cinemas around the country. The biennial industry conference Seafood Directions will host a panel discussion on the issue of slavery, on Friday in Melbourne. Details: sd2019.com.au