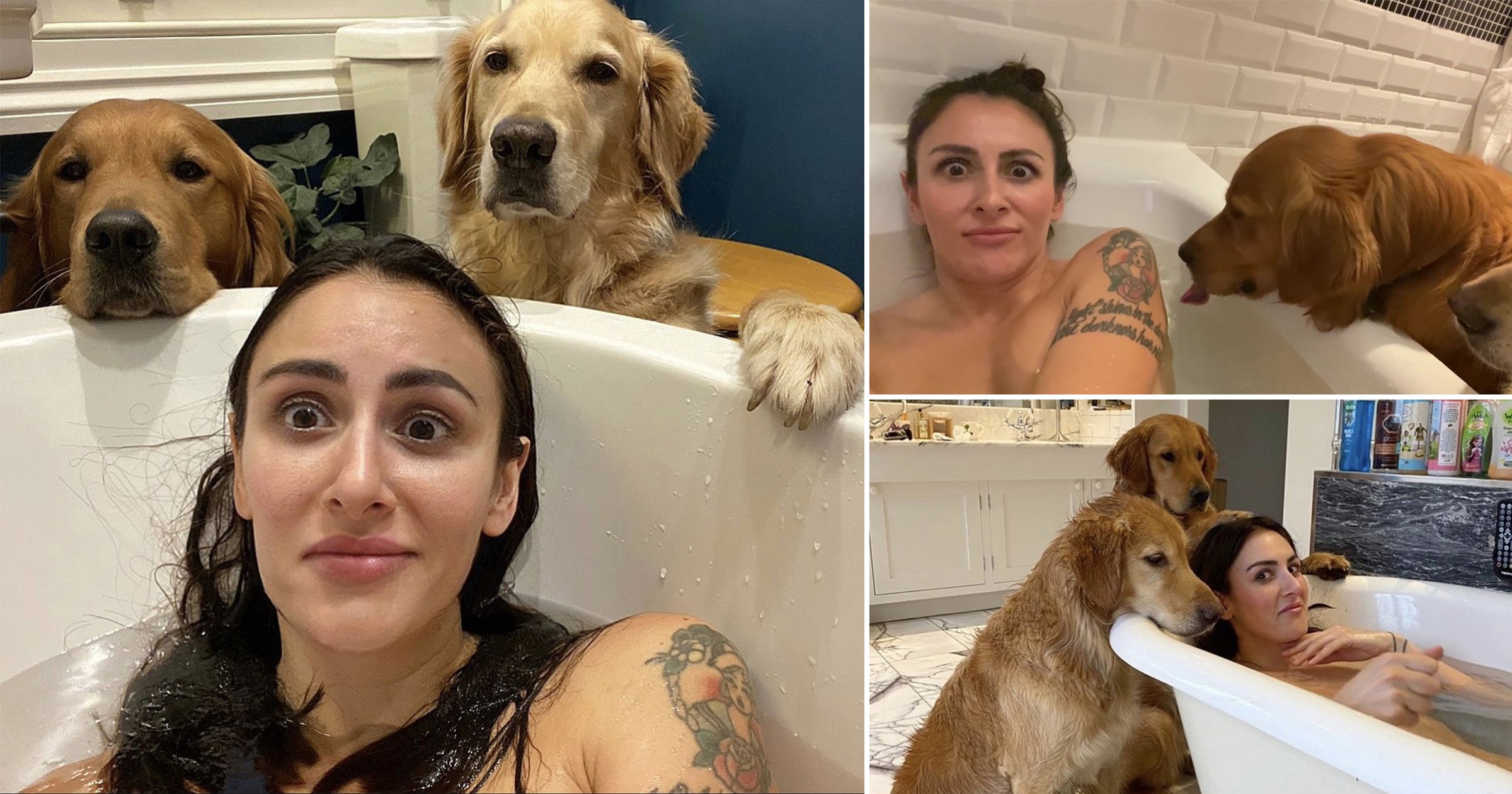 A woman has shared a video of her two adorable dogs gate-crashing her bath time, staring at her, and drinking her bathwater.

Ursula Aitchison was looking for a night of peace when she escaped to a London hotel last month, but her pampering plans were scuppered when Huxley, two, and Hugo, seven, muscled in on her chill time.

Mum-of-one Ursula filmed the two silly boys as they stood watching her intently from the edge of the tub before Huxley happily started to drink bathwater from behind her shoulder.

A dismayed Ursula, 33, can be seen widening her eyes as she looks at the camera, asking ‘are you finished yet?’

The hairy dude enjoys a final few more sips before giving her a good sniff, licking her, and gently placing his paw on her shoulder.

Ursula said her baths are regularly invaded by her dogs, who even like licking the water out of her hair.

She joked she ‘felt like a tea bag’ in a mug and ‘part of a human soup’ as Huxley happily lapped up the water in the bath in Park Lane’s Sheraton Grand.

Her video has been viewed more than 4.2 million times on Facebook, with social media users loving the exceedingly needy dogs.

Ursula, from Chelsea, West London, said: ‘They were both lying on the floor, watching me in the bath, but then they crept nearer and nearer.

‘It’d been a rush to get to the hotel after my son had finished school, and we were crammed on the busy tube. I just wanted a nice bit of relaxation before going down for a meal.

‘I had nice clean water contaminated by Huxley, I needed a second bath after that.

‘My bath at home is deeper, so he can’t get his head in, but this was lower so could reach it.

‘Normally if you wash your hair, and you come back up, Huxley will lick the water off your hair.

‘It’s really bizarre. I think he was waiting for me to do that, but he just decided to have a little drink instead.

‘They stayed there for the entire bath. He must have wanted hot water, like his own tea. I feel like I was the teabag in that situation.

‘I like them being needy, but I could do with some space in the bath. The drinking is definitely one step too far.’

Ursula stayed in the hotel for one night before going back to the home she shares with her 11-year-old son Maxx Moss, and where the dogs have their own room.

She posts regular content online revolving around Huxley and Hugo’s antics and has built up more than 270,000 followers across Instagram and TikTok.

Even though the dogs have plenty of their own space, they prefer to invade hers, following her everywhere.

Ursula said they can ‘get away with anything’ because it’s too hard to put her foot down.

‘They know I like my space, but you’ll tell them to go away and then a minute later they’ll come back again,’ she says. ‘It doesn’t matter where you are in the house.’

‘If I go out into the garden they’ll follow me there, and if I’m eating they’re constantly underneath me. I get no personal space.

‘I love my baths, so I’m usually in for around an hour. Huxley knows when the water’s running, and because it’s a free-standing bath he puts his head underneath and he waits for you to get in.

‘He’ll either lick your hair when it’s wet or just rest his head on the bath and start looking at you.

‘When you get out he’ll lick the water off your legs like a little drying technique. They can both get away with anything because you can’t be strict with them.’

Ursula’s post of the bath-drinking incident has been liked more than 20,000 times so far on her Instagram account, with one social media user commenting: ‘Maybe he’s hoping if he drinks the bath dry you’ll get out.’

As far as we’re concerned, bathwater drinking notwithstanding, she’s living the dream.