Barnaby Joyce will probably never again have so much power as he does at this moment, in his trading with Scott Morrison over support for the net zero by 2050 target.

Yet it’s a negotiation forced on him, for an objective he doesn’t believe in and which he fears could cost him and his party at the election. 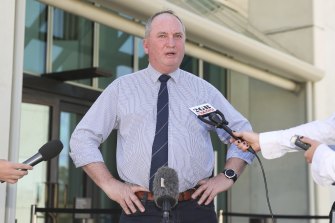 Deputy Prime Minister Barnaby Joyce has found himself needing to deliver to Morrison for Glasgow.Credit:Alex Ellinghausen

Joyce never accepted relinquishing the Nationals leadership, never stopped his quest to seize the job back. He and his supporters undermined Michael McCormack, in effect dubbing him Morrison’s doormat and insisting that on climate policy the Prime Minister would walk all over him.

Now Joyce has found himself needing to deliver to Morrison for Glasgow, albeit not as much as the PM wanted – the Nationals would not contemplate a bigger 2030 target – but enough to put the party into an awkward position in some of its seats.

For all his rambunctious style, Joyce doesn’t want the Nationals to blow up Morrison or the government. But nor does he want to self-destruct by losing seats.

He used opposition to net zero as weaponry in overthrowing McCormack. Not long ago, Joyce was as strongly against it as his close mate Senator Matt Canavan, who will never sign up to it, whatever deal the Nationals get from Morrison. Canavan says: “In the past decade, opposing radical climate action has won us the support of blue-collar workers and saved the Nationals from the ashes.”

In the jam in which he finds himself, Joyce has decided to lead by following. He declared from the start the Nationals’ position would be decided by the party room, not by him or even the leadership team. One National describes him as “facilitator-in-chief”.

Morrison is holding himself in but must be privately apoplectic. The PM’s preferred style, when it comes to governing, might be characterised as “we are me”. He’s all about control, discipline, paying lip service to his troops, but denying them any real clout.

Now here is Joyce not just giving his party a voice, but with frontbenchers running free and wild.

Which brings us to the Nationals’ Senate leader, Bridget McKenzie, the woman Morrison forced to fall on her sword when the sports rorts affair became dangerously hot.

In the Senate McKenzie was asked, did she agree with Canavan that if Morrison adopted net zero without Nationals’ support it would be “ugly”, and did Joyce agree?

“I think that it will be ugly. I agree with Senator Canavan,” McKenzie said. “You’ll have to check with Barnaby about whether he doesn’t.”

This followed multiple interviews when McKenzie said the Nationals had been dudded in the delivery of promises in the past and it shouldn’t happen again.

The Nationals have been anarchic over the past few years but, in another irony in this imbroglio, they have shown organisation and, despite their internal differences, a degree of solidity in dealing with Morrison.

Of course if Joyce wasn’t the leader, he’d be destabilising. Indeed, McCormack pointedly urged the party room this week to show integrity and not to leak like it did when he was leader.

A committee drew together the Nationals’ demands to be put to Morrison; it included McKenzie, deputy leader David Littleproud, resources minister Keith Pitt and Kevin Hogan, assistant minister to Joyce. It’s now being left to Joyce to clinch the deal with Morrison, before it comes back to the party room on Sunday.

The party sees itself in a pivotal moment in which it must extract guarantees. Nationals have said their focus is on support and security for regional industries and jobs rather than a string of specific projects financed by big buckets of money (“this is not about 30 pieces of silver”, says McKenzie), though it would be surprising if a good amount of funding isn’t involved.

Money is one thing, and not that painful to provide now the government doesn’t talk “debt and deficit”. Demands, for example for changes to environmental legislation, can be harder because they can set off fresh arguments for the government.

The trade-offs are important in the selling challenge ahead, but they’re not a magic carpet. Morrison might have a host of lobby groups and a News Corp tabloid campaign on side, but there is plenty of angst in the Nationals’ Queensland base and among some high-profile conservative commentators (such as Sky’s Peta Credlin) who appeal to that base.

In electoral terms, the Nationals’ fears are focused on central Queensland, where they hold three seats: Flynn, Capricornia and Dawson. The first two are mining seats; Dawson is economically and in other ways also tied into mining.

According to Nationals sources, polling in central Queensland shows strong opposition to net zero among their hard-core supporters.

All three of these seats have seemingly very safe margins. But that can be deceptive.

In Flynn and Dawson the members, Ken O’Dowd and George Christensen respectively, are retiring.

Of the three seats, Flynn is the most vulnerable, with Labor running a strong candidate, Gladstone mayor Matt Burnett.

The Nationals are worried about votes being eroded on the right in Queensland. One Nation will be active and Clive Palmer will be throwing around a large amount of money in advertising. 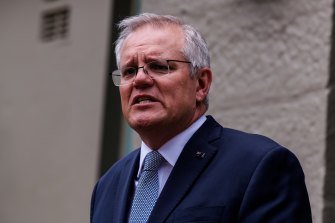 Joyce has always sold himself as an effective retail politician. But he’s politically stronger when he’s on the attack than defending a policy – let alone one he doesn’t actually believe in.

There’s a lot of the contrarian in Joyce. The government will invoke modelling to reassure doubters that net zero won’t harm jobs, indeed that it will help create them. But this week in parliament, Joyce was casting aspersions on modelling in general. “Modelling is not a letter from God. It is no more than the opinion of people.”

After Morrison flies off next week with net zero in his bag for the Glasgow climate conference, Joyce will be acting prime minister, fronting cameras and microphones, promoting what the Nationals have received in the deal and making the best he can of the 2050 target.

Both he and his prime minister will be nervous about how he’ll go in those early days when he’s in the spotlight.

Michelle Grattan is professorial fellow at the University of Canberra. This article was first published on The Conversation.