‘This is easily the best roast I’ve ever made’: Mum recreates Gordon Ramsay’s recipe for the ultimate apple and cider lamb – and can’t stop raving

An Australian home cook has wowed the internet after she recreated Gordon Ramsay’s simple recipe for an apple and cider roast lamb.

The mother, from Queensland, decided to give the British celebrity chef’s recipe a go but was initially skeptical with the unusual ingredient pairings.

‘I don’t actually like cider or apples in my food and thought it was strange to have it with lamb… I was a bit standoffish honestly,’ she wrote in a Facebook group.

But after following the recipe closely, she was amazed with the end results.

‘It’s easily the best lamb I’ve ever made,’ the woman insisted. 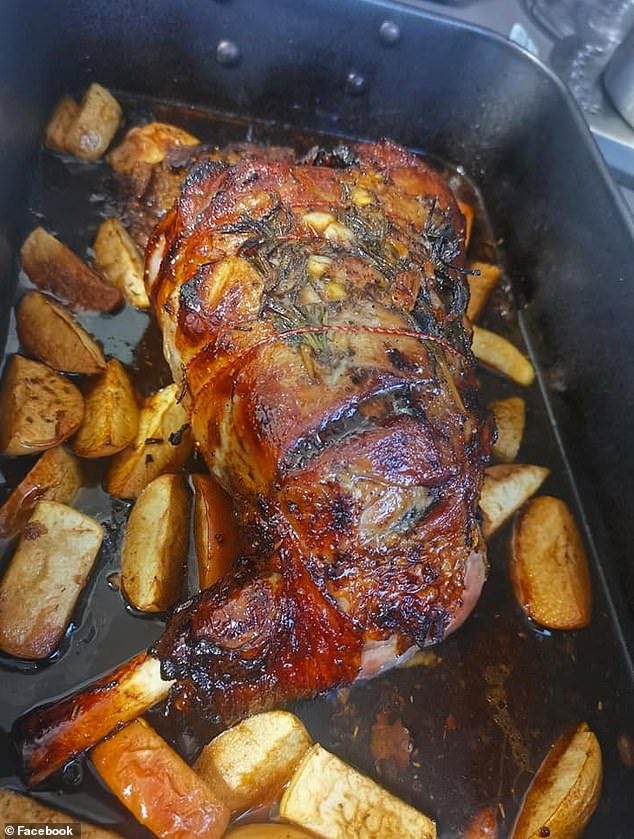 The ingredients you need to make Gordon Ramsay’s roast lamb

‘You couldn’t taste the cider… and same as the apples. I don’t like either of those things but the sauce was perfect. I was very surprised.

‘It was insane, to the point that my husband tipped his plate up to his mouth at the end… I also caught hubby taking a cheeky swig from the sauce in the gravy boat.’

When following the recipe, the mother thought she would tweak some ingredients along the way – but she realised the dish ‘needed nothing’.

‘The only thing I added was two teaspoons of cornflour to thicken the sauce but that’s just me. Depends how you like it,’ she explained.

To make the dish, she simply scored the fat on the leg, followed by a drizzle of olive oil, seasoned with salt and pepper.

She transferred the lamb onto a baking tray, seasoned with garlic, thyme and lemon juice and roasted in the oven for 60 minutes.

In the meantime, she cut the apples into quarters, removing the core. She removed the lamb from the oven, and scattered the apple pieces around the tray. The mother then baste the lamb with apple cider, and drizzled honey over the top.

‘I just poured a whole bottle of cider over it slowly and it was perfect,’ she explained.

The mother served the lamb with potatoes, steamed carrots and broccoli with gravy.

Many were impressed with her creation, with some saying they couldn’t wait to try out the recipe at home.

‘Oh my gosh that looks absolutely frigging delicious,’ one wrote, while another added: ‘I have a leg of lamb in the freezer… looks like this will be our next Sunday roast dinner! Thanks for sharing!’