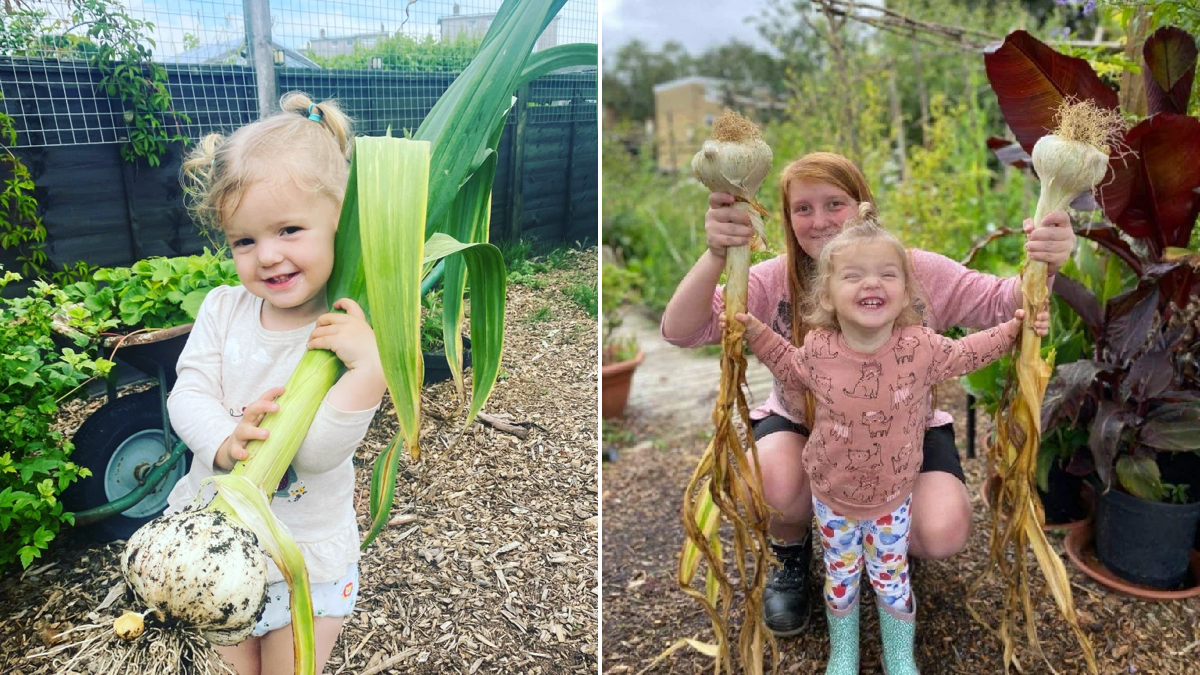 A stay-at-home mum had an unexpected surprise when she went to dig up the garlic in her garden.

Brooke Spiller, from Southampton, was shocked to discover that her bulbs had grown to an incredible size.

Measuring a huge 127cm in total, from the roots to the top of the leaves, the giant garlic bulbs were even bigger than her two-year-old Delilah – who is just 90cm tall.

The 22-year-old planted the bulbs last Halloween but never expected them to reach such heights.

She said: ‘A friend gave me some bulbs a while ago and we have ended up planting them every year since.

‘They seem to be getting bigger every year which is crazy. It’s called elephant garlic but I’m pretty sure they’re not usually this giant.’

Brooke has harvested 17 so far, but adds that she still has another 24 to go.

So there’s plenty for them to get through.

She said: ‘My family will be having garlic in every meal from now on.’

Brooke wanted to capture the moment by getting a snap of her daughter beside the impressive home-grown bounty.

She added: ‘I thought it might be nice to get a picture of Delilah next to the giant garlic and I was shocked that they were taller than her.

‘She found it hilarious. She really loves gardening.

‘Everyone loves the picture and have been asking about why the garlic grows so big.

‘I was so shocked how it grew so large and I would hope that it would be a contender for the biggest elephant garlic grown in the UK.’

What’s more, Brooke has now given some of the extra bulbs to her green-fingered family and friends – and has set them a challenge of seeing who can grow the biggest garlic plants.

Only time will tell.