A mother who spent six months hunting for the perfect wedding guest outfit was stunned to discover the ASOS frock she ordered was a ‘monstrosity’ that left her looking ‘like a half-opened present’.

Suzannah Smith, of Huddersfield, West Yorkshire, said she was at her ‘absolute wits end’ repeatedly ordering and returning outfits to wear to her best friend’s wedding.

The 35-year-old was browsing on ASOS last month when a £123 textured organza mint co-ord caught her eye, so she ordered it hoping a more ‘adventurous’ choice would finally pay off. 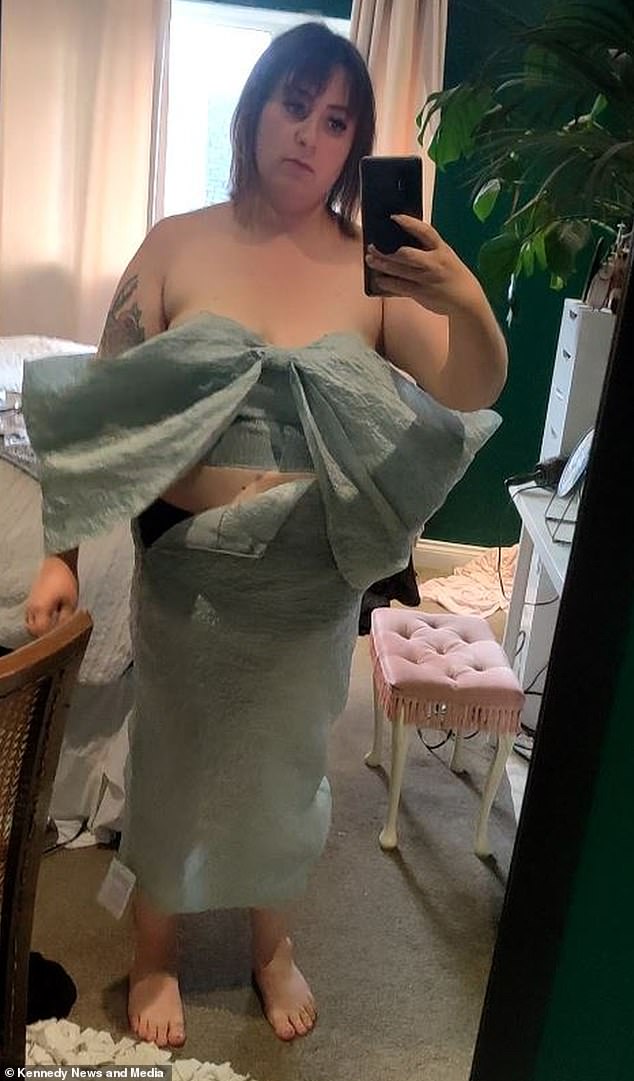 Suzannah Smith, of Huddersfield, West Yorkshire, who spent six months hunting for the perfect wedding guest outfit was stunned when she ordered an ASOS ‘monstrosity’ that left her looking ‘like a half-opened present’ 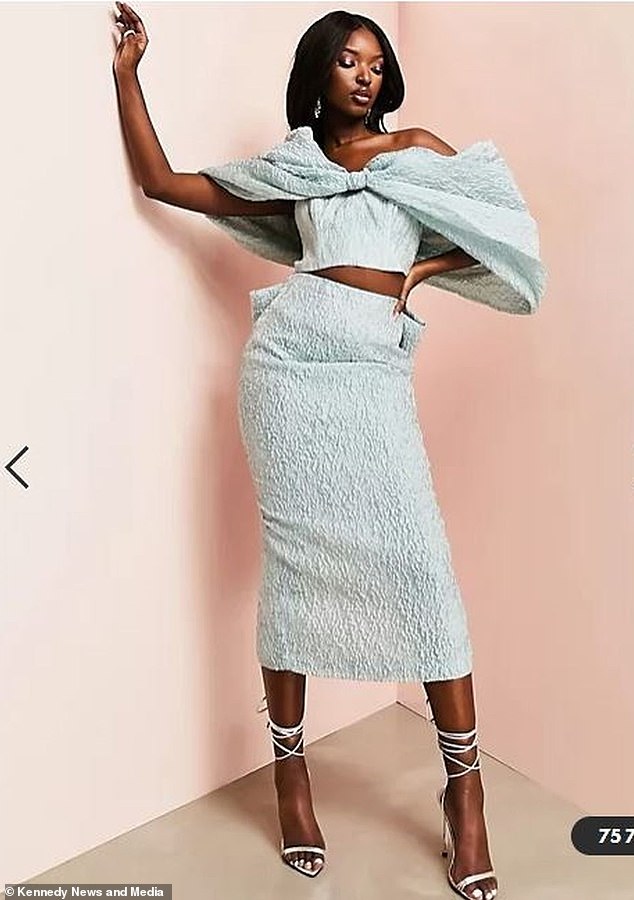 Despite sizing up to an 18 in the skirt, the size 16 hairdresser claims the ‘monstrosity’ didn’t fit and was a ‘naff’ material, akin to ‘toilet paper print’.

Amused by her online shopping fail, the mother-of-one shared a video of her donning the bold outfit that’s racked up more than 782,500 views, likes and comments.

The hilarious footage shows her with a deadpan expression standing in the mirror lifting up her arm to show off the voluminous bow sleeves.

She then turns to the side to shake her hips – revealing the unfastened zip. 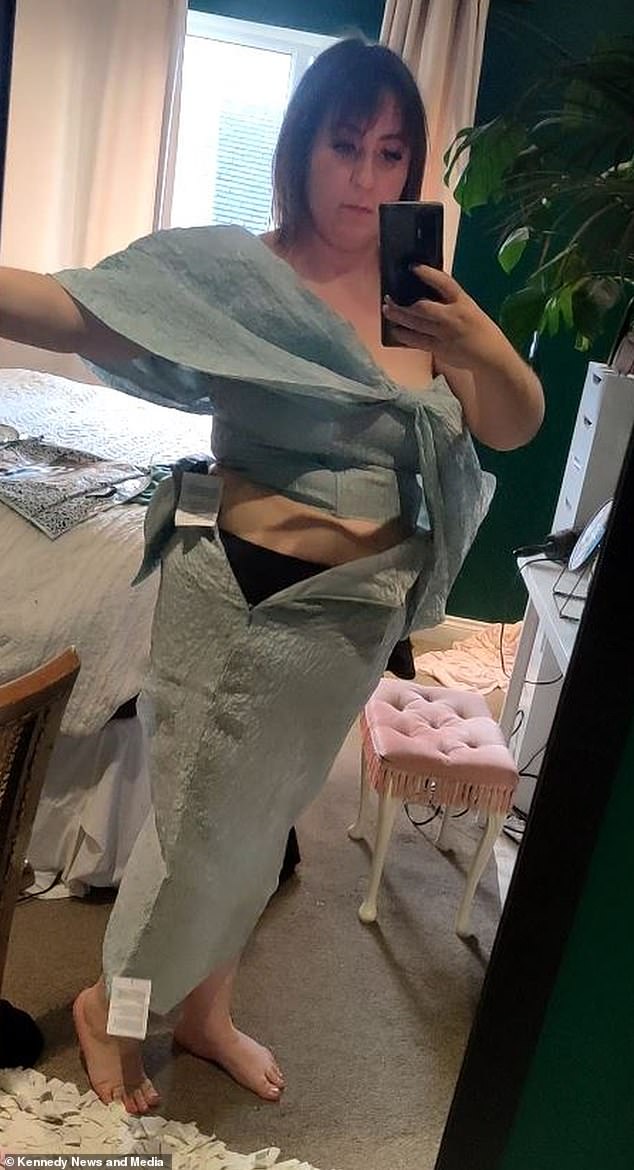 Despite sizing up to an 18 in the skirt, the size 16 hairdresser claims the ‘monstrosity’ still didn’t fit 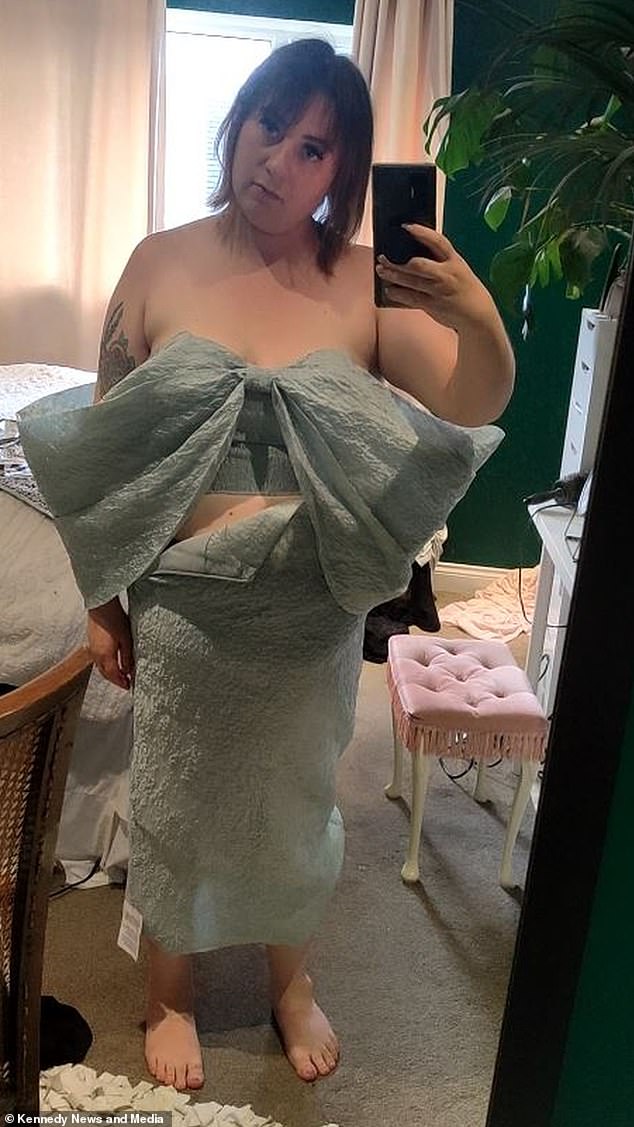 Suzannah said: ‘I looked like a half-opened present. Somebody suggested that I could give myself as a gift to the bride and groom and wrap myself up as the present.

‘I think one of the comments said I looked like a ‘crumpled bog roll’.

‘I was going to one of my best friend’s weddings and was at my absolute wits end trying to find something.

‘I started looking six months before the wedding to try and find something and nothing was coming up trumps. 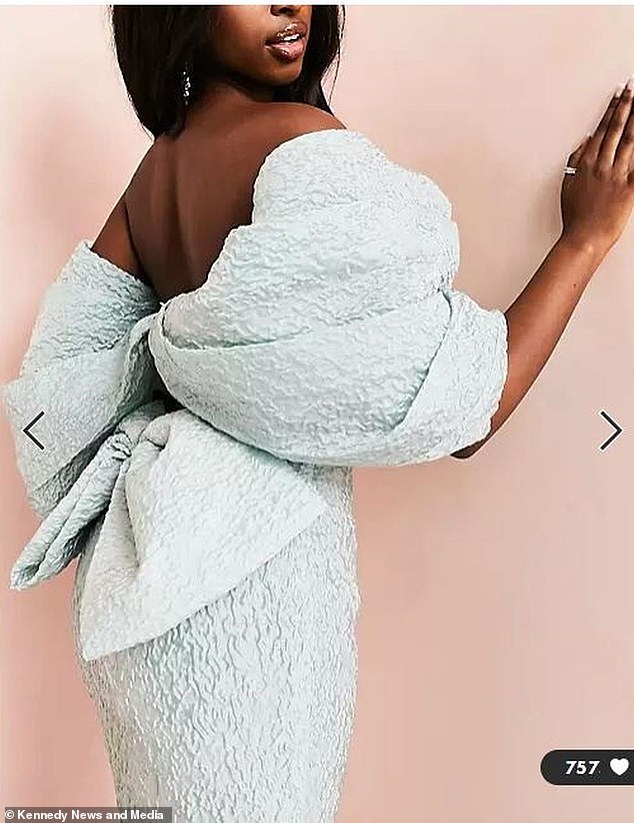 Although the outfit looked beautiful on the ASOS model, Suzannah said it had a really stiff fabric 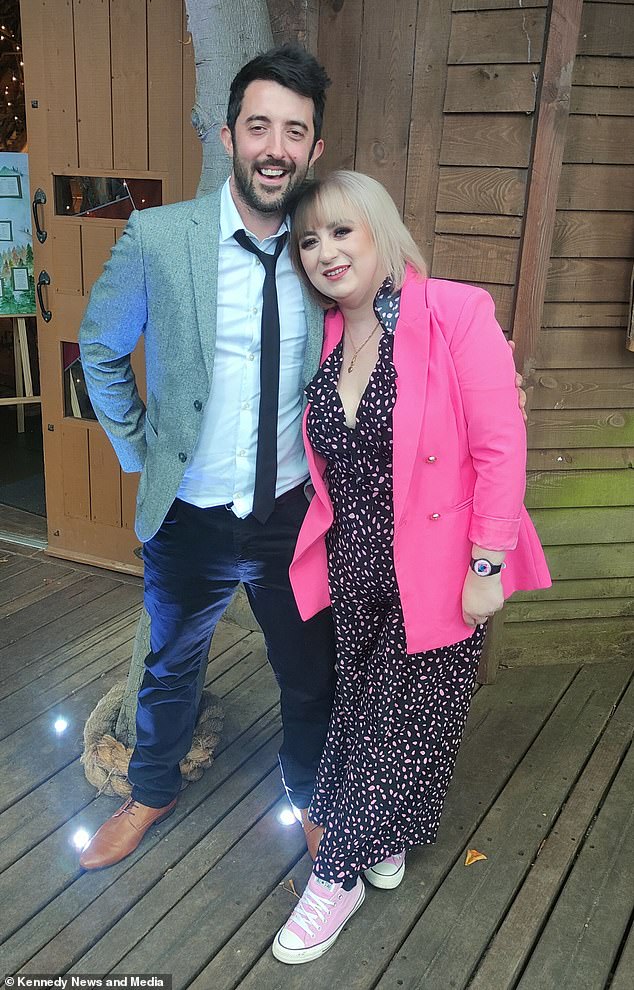 Suzannah with her pharmaceutical engineer husband Dan Smith, 36, at their friends wedding

‘I ordered it out of desperation, I’m not going to lie. I thought ‘oh it looks really nice on her and it’s a nice colour’.

‘I do like to look glam but I’m a new mum and haven’t been feeling very glam recently. I’m used to leggings and a baggy t-shirt these days.

‘So I thought I’d be a little bit more adventurous and try something new and then that monstrosity showed up.’

As the contents of her wardrobe are primarily black, Suzannah decided to opt for something ‘different’ when she splashed the cash on the pastel-coloured outfit. 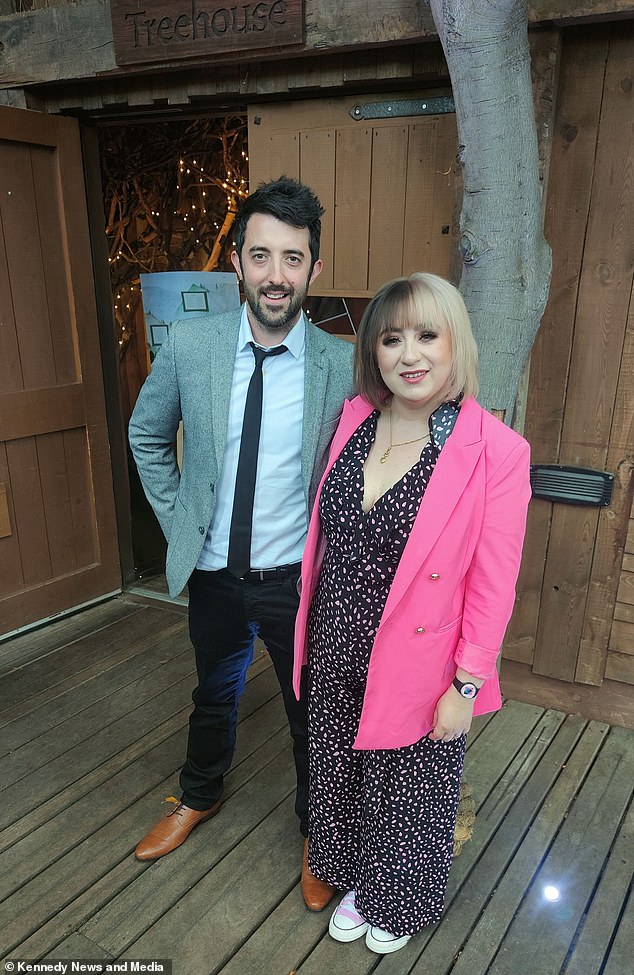 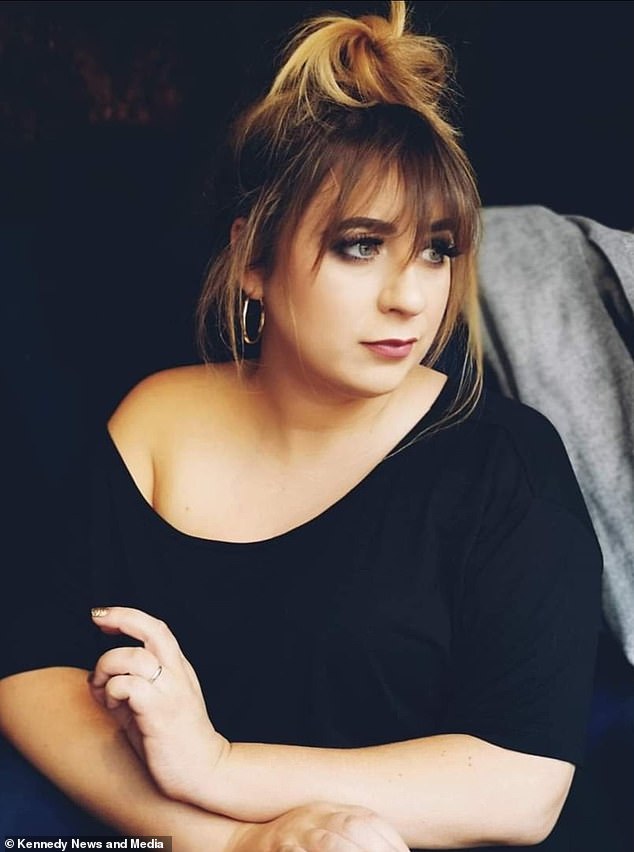 Suzannah said the contents of her wardrobe are primarily black, so thats why she decided to opt for something ‘different’

Suzannah said: ‘My initial thought was that the fabric wasn’t good quality but I honestly thought the skirt was going to fit me because when I held it up it looked so massive.

‘I thought ‘there’s no way my ass is that big’, that wasn’t the case.

‘I thought ‘it’s got to be alright’ because I ordered a size bigger than I normally order because it was a pencil skirt.

‘I’m a curvier girl so I didn’t want it to be too skin tight and I couldn’t even get it zipped up.

‘The top fit fine but obviously the model had somebody there on hand to arrange it for her and make it look nice but it looked like it was made from a really stiff fabric.

‘The texture of it was like toilet paper print, it was just so naff. 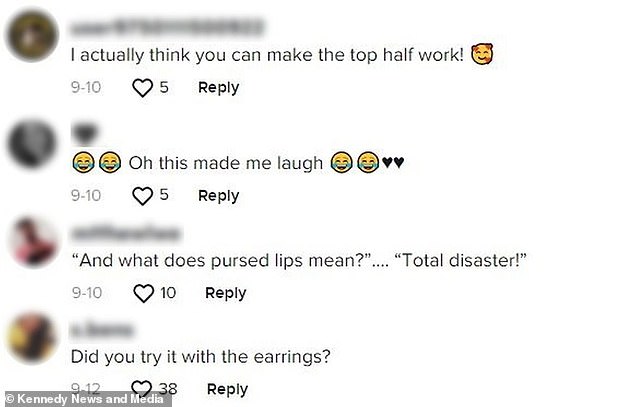 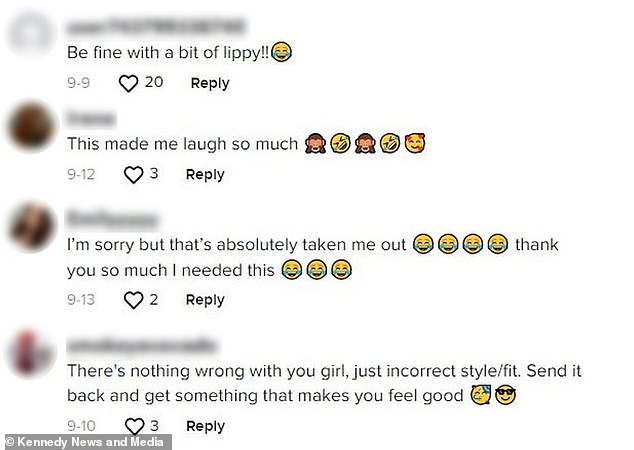 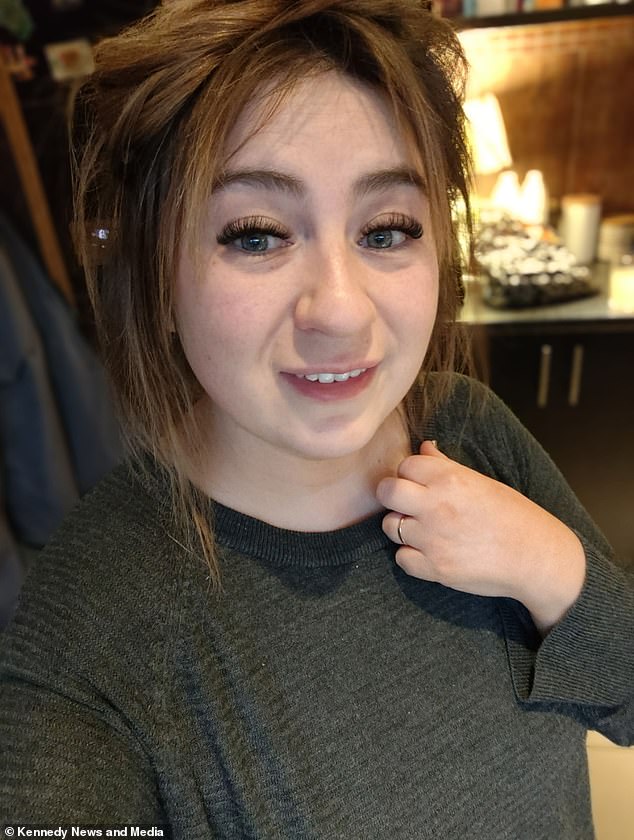 Suzannah is used to wearing darker colours during the day, hence why she decided to go with the pastel ASOS outfit

‘I ended up wearing a black jumpsuit with pink dots with a vintage 80s florescent pink jacket and pink converse.

‘I got loads of compliments about how lovely I looked, so it worked out.’

Suzannah shared her video on TikTok where it amassed more than 760 comments.

One user said: ‘Be fine with a bit of lippy!’ Another remarked: ‘This made me laugh so much.’

A third commented: ‘Did you try it with the earrings?’ A Devil Wears Prada fan wrote: ‘And what does pursed lips mean?’…. ‘Total disaster!’

A fifth said: ‘Me literally thinking something will look a certain way and when it comes I look like a potato.’