Mother issues warning to parents after her daughter, 14 months, grabbed and bit into a Christmas bauble during a festive photoshoot and needed an X-ray when it shattered in her mouth

A mother who had to rush her daughter to the hospital after the 14-month-old bit a Christmas tree bauble has warned other parents of the dangers associated with festive decorations.

Nikki, who lives in Australia, took to Instagram, explaining that she laid out ornaments for a festive photo shoot with her daughter Savannah, and before she knew it, the youngster picked up a bauble and bit into it.

The paramedic said she had to remove all the small fragments from Savannah’s mouth after the bauble exploded and then took her to a children’s hospital for an assessment and x-rays.

She admitted to being emotional despite the results coming back clear, saying: ‘I just wanted to share because I know the Christmas season is upon us, and our little ones are attracted to shiny and bright objects. It happened within seconds and it could have ended up with surgery.’

Nikki told how the terrifying situation had happened quickly and left many of her friends and family members shocked. 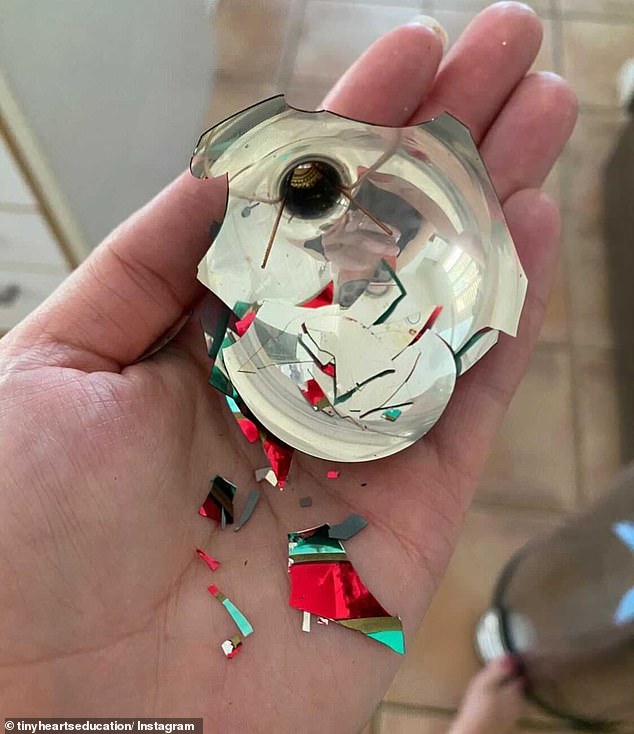 Nikki, who lives in Australia, took to Instagram , explaining that her daughter, 14 months, had bitten into a bauble during a festive photo shoot, which shattered in her mouth

Sharing a photo of the shattered bauble, Nikki wrote: ‘We had a bit of an incident yesterday and I felt like I wanted to reach out to you guys to let you know our story especially because it’s coming up to Christmas!

‘So many of my friends and family have been shocked by this and it’s such a great reminder for our little ones to keep safe.

‘My 14-month-old daughter Savannah and I were getting into the spirit doing a Christmas photo shoot in our lounge room. I’d gone all out with a backdrop and props and had some beautiful baubles nearby that my grandma had given me.

‘So I wanted to get them in the shot. I was watching Savannah the whole time, got her into position with a jingle bell toy and before I knew it she had scooped up this precious bauble and decided to bite it. As I turned around I heard a massive crunch, and it had exploded in her mouth.

‘Thankfully I stayed as calm as possible thanks to your course! I immediately got her, didn’t let her swallow and removed the small and tiny fragments out of her mouth.

I was absolutely petrified inside and made sure she was okay. I knew the parts were so small, and had essentially exploded in her mouth. We went to the children’s hospital for an all over assessment and X-rays. 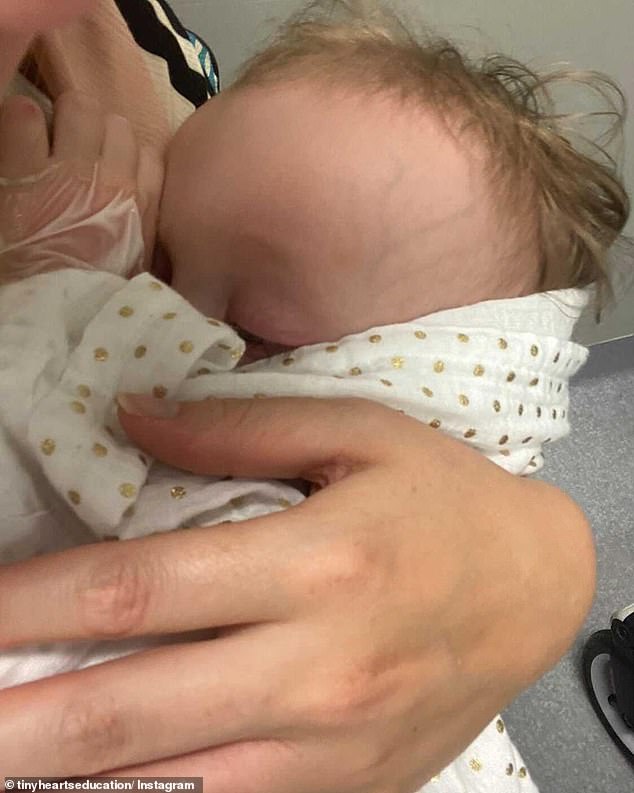 Nikki, who is a paramedic, said she didn’t let Savannah swallow and removed all the small fragments out of her mouth

‘I was more worried about her accidentally ingesting but the nurses brought to my attention she could have inhaled a fragment/s in shock when she bit down. Thankfully the X-rays came back clear and we were able to go home. I felt so lucky and relieved, and of course super emotional.’

Many parents commented on the post praising Nikki for raising awareness of the dangers of Christmas baubles, while some admitted they’ve had similar accidents with their own children.

One person wrote: ‘Glad she’s ok. I felt guilty for not letting our daughter touch our tree (I love it and I’m OCD with the decorations) now I’m glad it’s still in sight but now where she can access it. Would never have thought it’d be an issue.’

Another said: ‘My son recently did it with plastic ones from Kmart and had the same shard result.’

A third commented: ‘I just recently broke my four-year-old’s ‘First Christmas’ bauble… I couldn’t believe how paper thing it was and dangerous they are. Glad your little one is ok.’

Another added: ‘Thanks for sharing, I had no idea that it would explode. Will definitely be keeping my little ones hands off these bubble balls’

A stream of responses to the post have praised Nikki for raising awareness of the risks, with some admitting they’ve also had similar experiences