A single mother has been branded ‘selfish’ after admitting that she has stockpiled enough goods to last her family until January.

Mother-of-two Emma Tarry, 26, from Lancaster, has been building up a stock of food and other essentials through online shopping, in fear the country could soon be facing a second lockdown.

Appearing on This Morning today, she admitted that she has purchased 400 tins of food and 700 nappies in preparation, but thinks she ‘isn’t affecting her local supermarket’ because all of her shopping has been online.

Viewers weren’t convinced by her argument, with several branding the mother’s argument ‘utterly ridiculous’ and saying that regardless of where she does her shopping, stockpiling goods ‘creates a shortage’ for others. 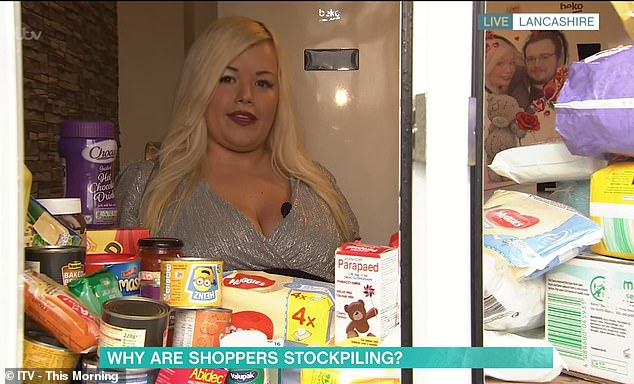 Emma Tarry, 26, from Lancaster has purchased frozen food, flour, 400 tins of canned food and 700 nappies in preparation for a second lockdown 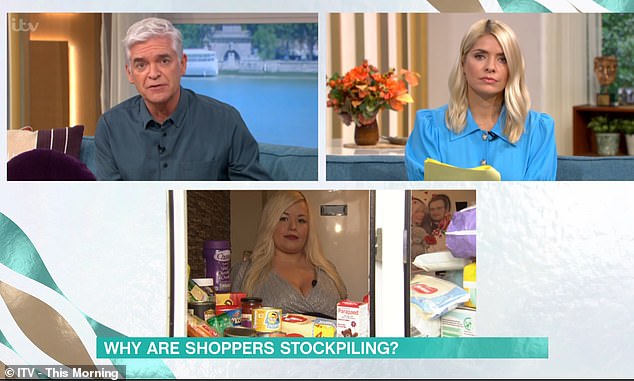 The mother-of-two has been building a stock of food and other goods through online shopping, including flour, baby products and tinned goods

‘My fridge freezer is bigger than usual so I’m able to stock it with more frozen foods and stuff like that. I’ve also got into baking. I’ve got flour so if I need bread I can make some at home.

‘Every time we go to a supermarket we’re putting our family at risk, so I think it’s best we just go to the supermarkets and shops as little as possible. I’m doing most of mine online, so I’m not affecting the local supermarket.’

Viewers quickly took to Twitter to rant about the mother, with one raging: ‘Stupid, selfish and utterly ridiculous! There is no excuse to stockpile! Shops should stop this right now!’

Viewers weren’t convinced by her argument, with several branding the mother’s argument ‘utterly ridiculous’ and calling her ‘selfish’

Another wrote: ‘This woman who stockpiles and has enough to last until January, this sums up what’s wrong with this country. There isn’t ANY shortage of things except what’s created by stockpiling. Just buy what you require and that’s it, simple’.

A third agreed: ‘Absolutely ridiculous. She just can’t see that she’s part of the problem. Her actions end up having a knock on effect. How many others are behaving the same as her though? This is why our local shops have no loo roll again now!’

Single mum Emma explained she feels ‘anxious’ about the unprecedented times we’re living in, and even fears that the government may start rationing food. 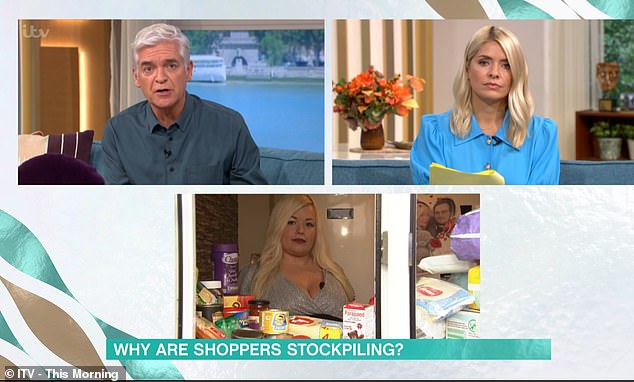 Single mum Emma explained she feels ‘anxious’ about the unprecedented times we’re living in, and even fears that the government may start rationing food

‘I have a lot of anxiety around this issue,’ told Emma. ‘Because the kids were back at school for a week then the school got closed.

‘These are unprecedented times, it’s never happened before on such an international level and I think rationing would be a thing, if everyone was unable to work and work in the supermarket.’

She added: ‘The items in the supermarket are not sanitised, so it’s a breeding ground for bacteria.

‘I don’t feel comfortable putting my family at risk every time I need milk or bread, so I limit how often I go out with stockpiling in advance.’

This isn’t the first time Emma has stockpiled, admitting that after seeing Italy’s rising cases before the first national lockdown, she began buying enough goods to feed her family, as well as handing out some of her stash to other family and friends. 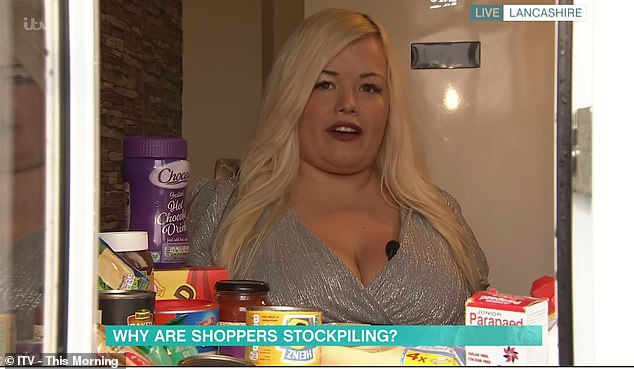 This isn’t the first time Emma has stockpiled, admitting that after seeing Italy’s rising cases before the first national lockdown, she began buying enough goods to feed her family

‘With the first lockdown I’d already prepared,’ said Emma. ‘When I saw what was going on with Italy in the news.

‘Because I’ve done it gradually over time, I haven’t had a huge impact on my local supermarket and I’ve been able to help my friends and family as well.’

Emma stressed that is ‘stockpiling is done properly’, it does not have a negative impact on shops and believes that ordering groceries of sites such as Amazon may even reduce the strain on supermarkets.

‘Stockpiling, if it’s done properly and you don’t go to excess, it’s fine,’ said Emma. ‘If you’ve prepared and got it online, or from Amazon I think that would take some of the strain of supermarkets.’