‘We’ve got a 30% chance of winning with him. With anyone else, it’s 5%’: Minister warns rebels PM is still best bet at next election, writes JASON GROVES

As he splashed into the pool of his Rwandan hotel for a pre-dawn swim yesterday, Boris Johnson knew it was going to be a difficult day.

By the time he was towelling himself dry 20 minutes later it had already got worse.

An early call from London had confirmed that by-elections in Wakefield, and in Tiverton and Honiton had both been lost, the latter on a massive swing to the Liberal Democrats that would send shivers through the ranks of southern Tory MPs.

For a PM whose big selling point with colleagues has always been his incredible ability to win elections it was a serious blow. 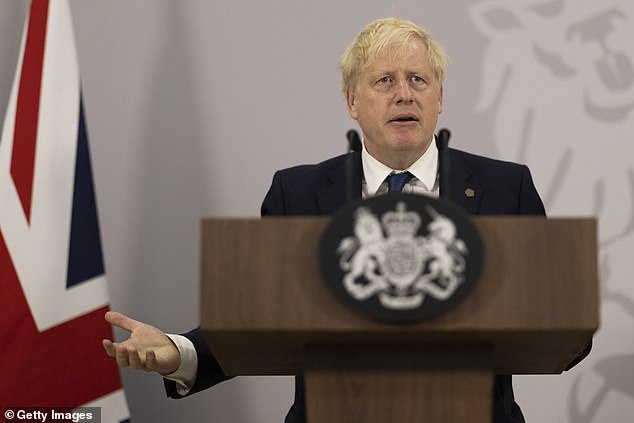 No 10 aides conceded the PM had been ‘blindsided’ by the attack from Mr Dowden, who 48 hours earlier had been helping him prepare for his weekly joust with Keir Starmer

Now his previously loyal party chairman Oliver Dowden was calling to resign. His resignation letter was quietly damning. Mr Dowden did not directly mention Partygate, but said he shared the ‘distress and disappointment’ of Tory members at ‘recent events’.

‘We cannot carry on with business as usual,’ he wrote. ‘Someone has to take responsibility.’

A few minutes later Sir Geoffrey Clifton-Brown, the treasurer of the 1922 Committee, was dialling in on a crackly phone line from the Cotswolds to tell BBC Radio 4’s Today programme that the party might have to ‘take steps to have a new prime minister’.

No 10 aides conceded the PM had been ‘blindsided’ by the attack from Mr Dowden, who 48 hours earlier had been helping him prepare for his weekly joust with Keir Starmer at Prime Minister’s Questions.

But if he was surprised he could not afford to dwell on it.

Moments later he picked up the phone to Rishi Sunak, who is known to be close to Mr Dowden, to ensure he did not follow him out of the Cabinet.

Further calls to Cabinet colleagues followed throughout the morning as preparations for a potentially tense meeting with Prince Charles at the Commonwealth summit were punctuated with efforts to shore up his own position 4,000 miles away in London.

By mid-morning, the situation was stabilising.

The Chancellor, after an apparent wobble, had issued a lukewarm tweet which failed to offer the PM direct support, but did at least confirm he wasn’t quitting.

The PM is due to be out of the country for eight days, with the Commonwealth summit followed by a G7 event in Germany ahead of a Nato summit in Madrid. Some allies fear he is courting danger by remaining out of the country for so long at such a febrile time, but a Tory source said it would be an ‘abdication of responsibility’ to return to the UK early

Some allies fear he is courting danger by remaining out of the country for so long at such a febrile time, but a Tory source said it would be an ‘abdication of responsibility’ to return to the UK early.

The source also laid the blame for the prime minister’s current woes on the media, saying that the ‘endless reportage and Kremlinology of Partygate is nonsense’.

For his part, the PM used a TV clip to promise to ‘listen’ to voters’ concerns and to make the point that mid-term by-election defeats are nothing new.

‘If governments crumbled in the face of by-elections we wouldn’t have had many post-war governments,’ he told reporters at a press conference in the Rwandan capital Kigali.

Labour’s win in Wakefield, where the former Tory MP has been jailed for sexually assaulting a teenage boy, was not enough to put Keir Starmer on a clear path to No 10.

While the Tory vote collapsed by more than 17 per cent, Labour’s picked up by just 8 per cent, suggesting there is still a lack of enthusiasm for Sir Keir’s lifeless brand of socialism in parts of Labour’s former Red Wall.

Many Conservative supporters appear to have switched instead to independent candidate Akef Akbar, a former Tory councillor who quit the party in March branding the PM an ‘idiot’. In Tiverton, the Liberal Democrats engineered a monster swing by successfully persuading Labour supporters to vote tactically. Labour, which had come in second in 2019, lost its deposit.

Allies of the PM were quick to point out that Margaret Thatcher came back from any number of terrible mid-term by-elections in the 1980s, with Dominic Raab correctly pointing out that ‘the choice at a general election is very different’.

But, whether it was the result of an informal Lib/Lab pact or just greater tactical awareness, there are fears these results signal that a potentially serious anti-Conservative alliance is taking hold.

‘If that continues, winning the next general election could begin to look a lot more difficult.’

Mr Johnson also has to deal with the fact that internal opposition to his leadership continues to break out all over.

Michael Howard yesterday became the most senior Brexiteer to join the calls for him to go.

‘The party and more importantly the country would be better off under new leadership,’ the former Conservative leader said, before urging the Cabinet to rise up against him.

But if Cabinet ministers were less than effusive about the PM’s continued leadership there was also little sign of a stampede against him.

Indeed, some think their backbench colleagues have lost their minds and are in danger of wrecking the party’s remaining hope of clinging on to power. One Cabinet loyalist said: ‘I’m sticking with the PM because when you boil it down he’s still our best chance of winning the next election.

‘With him we’ve got maybe a 30 per cent chance; with anyone else it’s more like 5 per cent.

‘I think when more colleagues make that cold calculation things will stabilise – they’ve got to, or it’s all over.’

But one former senior minister branded the Cabinet ‘spineless’, adding: ‘Do they really think we are going to win back seats like Wakefield, and if not, how are we going to win?’

Some rebels have given up waiting for the Cabinet and are looking to change the leadership rules so that they can take another shot at the prime minister themselves.

One southern Tory who faces a Lib Dem insurgency of his own said: ‘It’s clear the Cabinet are not going to act so we will have to knock the c*** out of him ourselves. If we don’t, we are finished.’

Leading plotter Andrew Bridgen yesterday declared he will stand for election to the executive of the 1922 Committee on a platform of changing the rules.

Tory whips are alive to the threat and are already mobilising support for more friendly candidates when the elections take place next month.

But even if they succeed for now, the episode will keep the Government bogged down in debilitating internal battles at a time when it desperately needs to show the public it is acting on the cost of living.

Mr Johnson talked the talk on tax cuts again yesterday, insisting the Government ‘believes in cutting taxes’ despite having repeatedly put them up.

But even supportive MPs complain they have heard it all before.

As one minister put it yesterday: ‘He is lucky in his enemies – Starmer is a dud and his opponents in the party are disorganised.

‘He’s still got time to turn things around and I hope he does.

‘But I’m not sure he knows how to do it any more.’