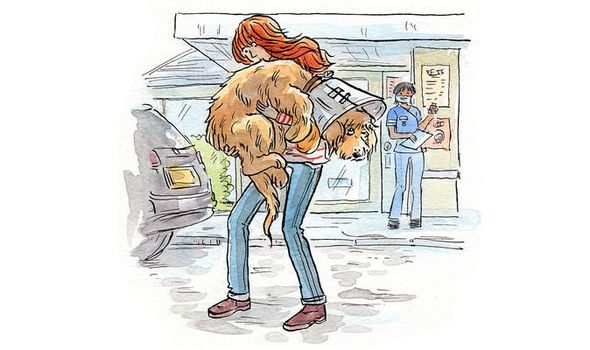 Well, he had a reprieve a few weeks ago but D-day for our boy dog finally arrived this week. I knew poor Ojo couldn’t have any breakfast prior to his awful op, so the night before he was treated to most of the leftovers from our Sunday roast for his supper. And with a tummy full of chicken and roast potatoes, complete with a soupcon of gravy artistically drizzled over the top, plus his normal dog food, he blissfully snoozed the night away.

At 6.15 the following morning he was a little disgruntled to stay behind when Sparrow and I left the house to sort out the horses. But Ojo, like many dogs, has an appetite for horse poop – yes, I know, yuk. Apparently it’s full of probiotics (as long as the horse hasn’t recently been wormed, when it could be toxic). He’s also quite partial to a stray horse treat or an egg, if he can get to the hens’ nesting boxes ahead of me.

But the vet’s instructions were clear – he had to be starved prior to surgery. So Ojo was left in his crate in the kitchen where not so much as a few breadcrumbs could be scavenged. He was so excited when on our return I reached for his lead. What a treat, an extra morning walk… Then we wandered towards the car and I could see his face fall and sense his thoughts, “Uh-oh.” 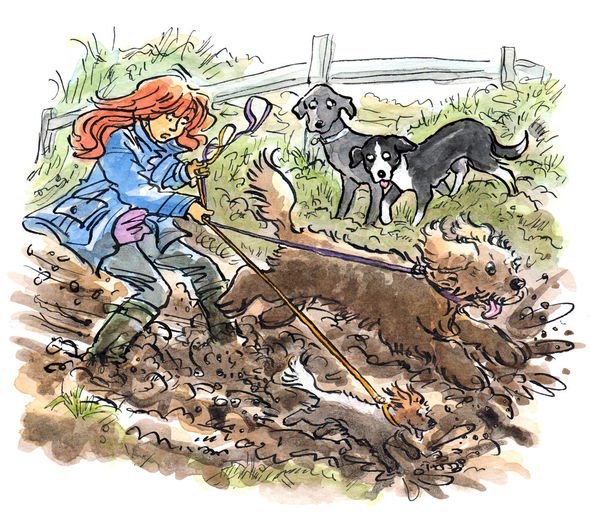 Ojo doesn’t especially like car travel and wouldn’t dream of getting into the car voluntarily. He’s a sulker. He sits down and makes himself as heavy as possible while I grunt under his weight lifting him in. Once we set off, though, he seems to settle and will raise his nose to sniff the breeze from the open window when he thinks I’m not looking. But mostly, he sulks.

The journey went well until we parked at the vet’s. I lifted him out and we strolled around for a few minutes before a nurse came out with a clipboard. Ojo barked at her. “Ojo, don’t be silly,” I told him. After the nurse greeted him, he realised she wasn’t an axe-wielding threat and sat patiently to be fussed by her while I signed the consent form. As he disappeared into the surgery I felt a huge lump in my throat. Poor lad.

I’d agreed to go pre-uni shopping with Izzy that day, which felt like a good use of time and would keep me occupied while our big teddy bear of a dog was under the knife. We set off for Bristol and found everything from table lamps to chopping boards. Our trip was a success. We even managed to satisfy her pot obsession – the clay or metal vessels, not the now-legal-in-parts-of-America plant – and had at least five of various shapes and sizes clanking against pans or sandwiched between cushions on the way home.

I just had time to unload the car before zooming off to pick up the patient and oh, what a sad boy he was. He pulled on his lead, dragging the nurse towards me, and hid his plastic-shrouded head in my legs while his tail stuck solidly under his belly.

“Oh, Boje.” I gave him a huge cuddle but his eyes looked so sad, as if he was saying, “Why did you leave me with these people, have you have any idea what they’ve done to me? How could you?”

“Come on boy, you’ll be ok.” I tried to cajole him, but the poor chap had already seen the doors of the Discovery open and waiting for him… talk about adding insult to injury. He cheered up a little when we finally arrived home, although naturally he wasn’t allowed to jump on to his favourite window seat and instead was escorted to his crate with a dental chew.

It’s interesting how so many experts were quick to tell me he wouldn’t even notice or it was nothing, such a quick, simple procedure.  I don’t think Ojo would agree. Something is definitely not right and he doesn’t like it.

Dimple Chicken is beside herself with worry and Ojo simply can’t get the hang of manoeuvring around obstacles with a big plastic funnel on his head. He actually prefers being in his crate where there’s nothing to bump into, even if he does get into a bit of a pickle if he tries to inspect his stitches.

It’s the right thing to do for his mental health, his safety, and to prevent unwanted litters of puppies.

But even though we know we’re acting responsibly, like thousands of other dog owners we can’t help feeling guilty. And unlike most dogs, ours is a master of the sulk.

He should be back to normal in a few days, but I fear he may be going for the world record.