Megan Thee Stallion has no time for ‘toxic’ love. On ‘Beautiful Mistakes,’ her new song with Maroon 5, the ‘Body’ rapper tells a former flame the ‘only way I’m coming back to you is in your dreams.’

Maroon 5 kicked off their comeback on Wednesday (March 3) in an appropriately epic way: with a new song featuring Megan Thee Stallion. The band – Adam Levine, Jesse Carmichael, James Valentine, Matt Flynn, PJ Morton, and Sam Farrar – teamed up with Hot Girl Meg for “Beautiful Mistakes,” another slice of the band’s signature pop rock. The song comes with some bite, courtesy of Megan (who, let’s be honest, steals the show on the track.)

“You did me wrong cause I let you / usually I like my situations beneficial,” raps Megan. “Got me looking stupid / the only way I’m coming back to you / is in your dreams / Lucid.” Megan also busts out the pipes and sings quiet beautifully on the song. “Bet you miss my love all in your bed / Now ya stressin’ out / pulling your hair / smelling your pillows and wishin’ I was there.” She ends the verse with a warning: “If we break up I don’t want to be friends / you’re toxic.”

Maroon 5 officially announced the collaboration in late February. It came as no surprise to fans of both since the band had been posting behind-the-scenes snapshots of their music video to their Instagram Story. The band also tweeted out a lyric – “fill my nights with broken dreams” – as well as a preview of the video that seemingly contained the chorus. “I wouldn’t take him back / I’m in love with the past / And now we lie awake makin’ beautiful mistakes / Na-na-na, in my head,” per Genius. “Beautiful Mistakes” marks Maroon 5’s first song since October’s “Nobody’s Love (Remix)” with dancehall star Popcaan. The band’s last album was 2017’s Red Pill Blues, which has gone to be certified platinum by the RIAA.

“It’s almost kind of this great symbiosis that occurs between whoever the feature is and the band, where it’s at this great moment where we feel like we really have read the right timing,” Levine said when speaking to Zane Lowe. “And it’s nice, because it opens up our eyes to new things, and theirs as well, so it’s really been great. And, yeah, it’s like Megan is 100% meets all the criteria for just this really special person, super talented, having a moment. And, sorry, I didn’t even mention Cardi. I mean, Cardi was probably one of the biggest features we ever had. There’s just so many of them, and we’ve been so fortunate to have so many great collabs. It’s just like, but yeah, Megan falls right in that perfect category.

At first glance, it seems that “Beautiful Mistakes” follows Maroon 5’s well-treaded path of securing a feature from the current hot rapper/singer of the moment. The results have been mixed. 2017’s “Cold” featuring Future failed to crack the Top 10 of the Billboard Hot 100, whereas 2016’s “Don’t Wanna Know” with Kendrick Lamar reached No. 6. The SZA-backed “What Lovers Do” reached No. 9, and “Girls Like You,” a song that featured Cardi B on the remix, was the band’s first No. 1 song since 2012’s “One More Night.” Though, this not to disparage the wide-appeal of Maroon 5. The band’s 2019 single, “Memories,” reached No. 2 on its own and has since gone triple-platinum. 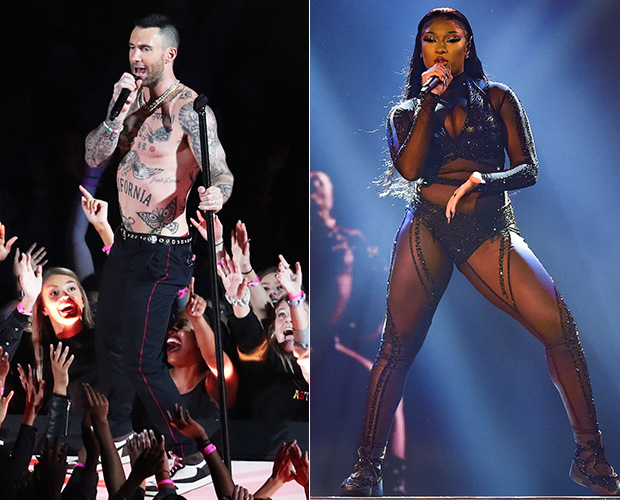 Despite it being only March, Meg has been busy in 2021. In addition to this collab, she dropped the video for “Cry Baby,” teamed with Bobby Sessions for “I’m A King,” the lead single off of the Coming 2 America soundtrack, and joined Ariana Grande and Doja Cat for the “34+35 (Remix).” These featured appearances come after a year where Hot Girl Meg stole the spotlight, thanks to her Suga EP – fueled by its massive viral hit, “Savage” – and her debut studio album, Good News. The album produced a trio of charting hits: “Girls In The Hood,” “Don’t Stop,” and her second viral-hit of 2020, “Body.” Whether or not Meg follows the Good News with new music remains to be seen, but after the year she’s had, she could deservedly spend 2021 becoming the new “in-demand” features artist while enjoying the fruits of her labor.