MARK ALMOND: A fitting end for Radovan Karadzic, the sadistic warlord dubbed the ‘Butcher of Bosnia’ who loved to humiliate us

There is a poetic justice in the ‘Butcher of Bosnia’ being transferred to a British prison to serve out his life sentence for war crimes.

Bosnian Serb leader Radovan Karadzic was both an architect of the ethnic conflict that claimed 100,000 lives, and the memorable face and voice denying to the world but justifying in the same breath the cruel ethnic cleansing which culminated in the massacre of 8,000 Bosnian Muslim men and boys at Srebrenica in July 1995.

A fluent English speaker and a qualified psychiatrist who understood and enjoyed mind games, the debonair Karadzic, with his mane of greying hair, took particular pleasure in humiliating a succession of British mediators and peacekeepers trying to end the conflict.

For three years, Karadzic was a fixture in news bulletins, eloquently denying responsibility for the hell into which Bosnia was descending, for the slaughter and for the very existence of concentration camps where Bosnian Muslims were being systematically starved and tortured. 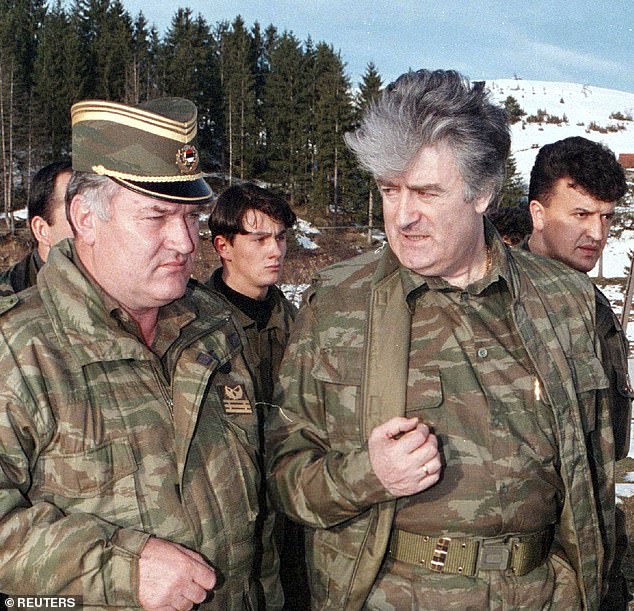 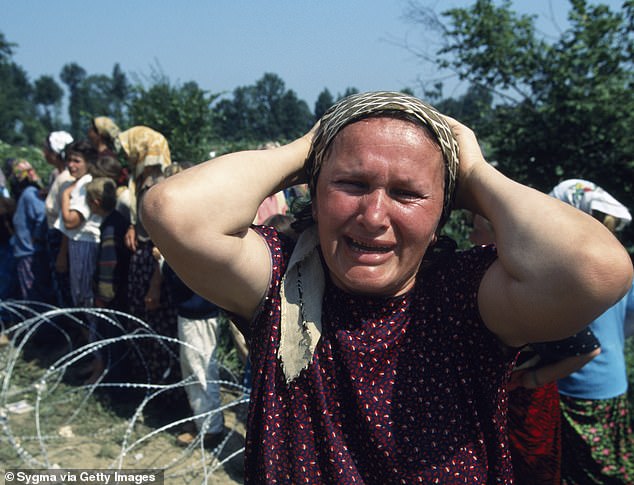 A woman who fled the genocide in Srebrenica, in Bosnia and Herzegovina, arrives in Tuzla

John Major, then British prime minister, and leaders of other EU states bestowed enormous prestige on this small-town Balkan hoodlum by negotiating with him.

Karadzic’s sudden rise to global notoriety 30 years ago was predicted by none of his contemporaries as he was growing up in communist Yugoslavia under Tito’s dictatorship after 1945.

The Second World War had seen brutal civil wars erupt between competing ethnic groups, including Bosnia’s Serbs and Muslims, but Tito required everyone to ‘forget’ the brutalities between 1941 and 1945 in the interests of a united Yugoslavia.

Karadzic’s family had moved to the Bosnian capital, Sarajevo, from the countryside where, in his student years, he mixed medical studies with a fascination for medieval Serbian poetry, particularly from the era of conflicts between Christian Serbs and the invading Muslim Turks.

This was the seedbed of his obsession with ‘cleansing’ Bosnia’s Muslims from where they had lived for centuries.

The opportunities provided to Karadzic to continue his medical studies abroad – prestige courses in New York and at London’s Tavistock Clinic – suggest he was probably sponsored by Tito’s sinister secret police, the KOS.

There were clues to his future career as a sadistic warlord in the 1980s. One of his patients in Sarajevo told me how Karadzic prescribed him pills to treat his suicidal feelings which actually increased the temptation to jump out of his tower-block window.

The patient threw the pills out and when he next saw Karadzic, the psychiatrist beamed at him maniacally and said: ‘So… my treatment is working.’

Even as a doctor he saw other human beings as play things.

After the fall of communism in Eastern Europe, Karadzic emerged as one of the leading ‘post-communist’ politicians. His ‘poetic’ Serbian nationalism combined with his contacts with the ethnic Serbs running the secret police and army catapulted him into the new political elite as Yugoslavia imploded.

Abandoning ‘multi-cultural’ communist slogans, political leaders such as Slobodan Milosevic in Serbia turned on a torrent of nationalist rhetoric to retain power. 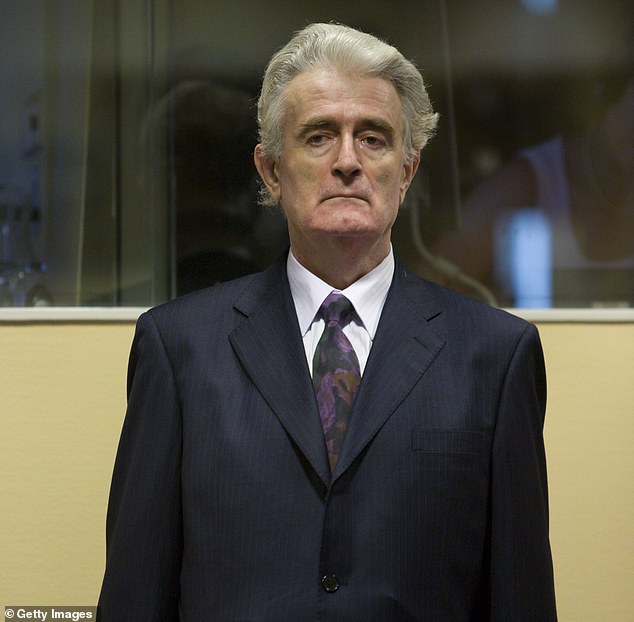 Karadzic makes an appearance at the International Criminal Tribunal in The Hague, The Netherlands 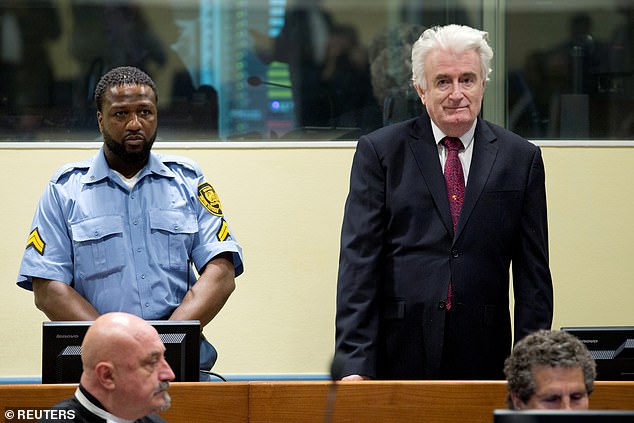 In Bosnia, Karadzic – by then president of the Republika Sprska, one of two entities of Bosnia and Herzegovina – was key to setting Serbs, Muslims and Croats at each others’ throats.

With his military commander, Ratko Mladic, Karadzic mobilised Serbs to expel by force the Muslims from land shared with the Serbs for 500 years.

Mladic was the hands-on killer but it was Karadzic’s skills as a propagandist which drew local Serbs into a web of sectarian murder.

When Nato finally intervened to stop the slaughter in 1995, Karadzic abandoned ‘his people’ and disappeared to the Serbian capital Belgrade, where he worked as a faith healer until he was finally tracked down by The Hague’s war crimes tribunal in 2008.

In March 2016, he was given a 40-year sentence for the genocide at Srebrenica – raised to life on appeal by the prosecution.

Those 13 years of apparent impunity after being the voice of ethnic cleansing remain a mystery.

Was he protected in the Serbian capital by the same secret police which had sponsored his rise in 1990? Karadzic continues to haunt the survivors of his war against Muslim civilians.

That trauma won’t be ended by the news that he will be living out his last years in a British prison – in accordance with the Government’s sharing of the burden of criminals convicted at the International Criminal Court in The Hague.

It is a modest punishment for a cynical and ruthless political adventurer such as Karadzic whose poisonous legacy leaves Bosnia still scarred and divided.

Mark Almond is Director of the Crisis Research Centre, Oxford

By David Barrett and Jason Groves for the Daily Mail

The ‘Butcher of Bosnia’, Radovan Karadzic, will serve the rest of his life sentence for war crimes and genocide in a British jail.

The Bosnian Serb leader was convicted in 2016 of atrocities including the massacre of 8,000 Muslim men and boys at Srebrenica in 1995, regarded as one of the worst atrocities committed in Europe since the Second World War.

He will be transferred to the UK in the next few weeks, the Mail understands, and is set to die in a British prison. 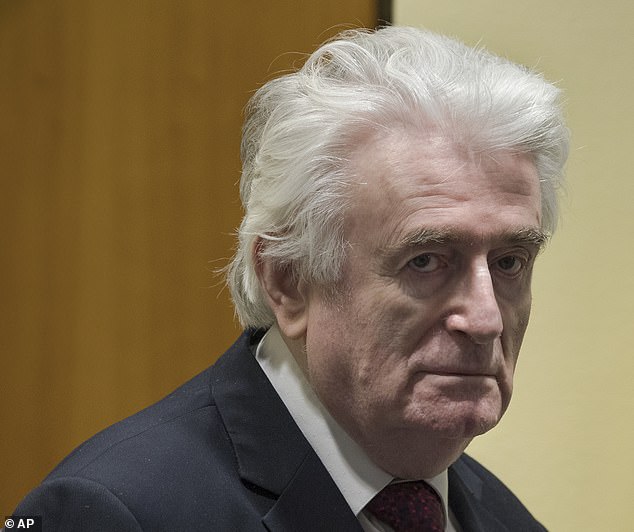 A final decision is yet to be made on which jail will house Karadzic, who was once the world’s most wanted man, but the front-runner is believed to be Frankland high-security prison in County Durham, which already holds another war criminal, former Liberia president Charles Taylor.

Karadzic, 75, will be moved to this country as part of Britain’s ‘commitment to international law and justice’, a source said.

‘Karadzic was convicted of genocide for crimes committed almost 30 years ago. This demonstrates the long arm of international justice and Britain’s role in it,’ the source added.

He added: ‘If we want to deter these types of crime from happening, if we want to give justice to the many thousands of victims, I think it is right we do our bit.’

Prisoners convicted by the International Criminal Tribunal for the former Yugoslavia, the UN court that dealt with related war crimes – and other war crimes tribunals – are distributed between supportive member states.

It is effectively Britain’s turn to take responsibility for enforcing the sentence of the court.

A prisoner in a high-security jail costs the British taxpayer around £100,000 a year.

Special measures will be put in place to protect Karadzic from revenge attacks by other inmates, particularly Islamist terrorists.

He is expected to require close supervision by prison wardens, although it has not yet been decided whether he will require a special ‘jail within a jail’, sources said.

Karadzic was convicted of genocide and crimes against humanity in 2016 at a tribunal hearing in The Hague, and sentenced to serve 40 years, later increased to life.

Following the end of the Bosnian war, the psychiatrist-turned-politician evaded justice for more than a decade before he was arrested in 2008 in Belgrade.

He was working as a doctor of alternative medicine under an assumed name, wearing his white hair in a plaited top-knot. He is currently being held in the UN detention centre in the Netherlands.