When Matthew Murphy, frontman from British indie band the Wombats, debuted his new solo project, Love Fame Tragedy, at this year’s Reading Festival in the UK, it was a disaster. Or was it?

“We played a secret unannounced slot on the BBC Music Introducing stage,” the 35-year-old says. “I wouldn’t even call it a show, to be honest. F—ing awful. No, it probably wasn’t that bad, but there was some dodgy power on stage. It was a real baptism of fire, but maybe wasn’t as bad as I thought it was.” 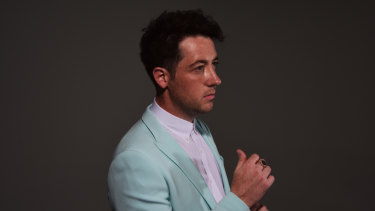 When we speak, Murphy is scoping out his breakfast options in London ahead of a full day’s rehearsal with his new band. He’d flown in from his adopted home of Los Angeles the previous day and would travel to his birthplace Liverpool the day after to perform their second show and kick off a tour that includes Australian shows.

Love Fame Tragedy was named after a Pablo Picasso exhibition at London’s Tate Modern, but it was really borne out of the creative, collaborative spirit of L.A., where he relocated to with his wife (he’s also become a father recently) in 2016.

This is something I just want to keep as blurry as possible.

“I love Los Angeles,” Murphy says. “It's ridiculous, but I definitely feel about 10 to 15 per cent happier there and the weather is probably good for me. It seems like everyone's moving there now, and collaboration and being a collaborator is in the air. L.A.’s weird, because you can end up on a bender with Steve Buscemi … all these weird things happen, so you just try and kind of harness them in whatever way you can and get inspired by how obscene L.A. life can be.”

Backflip, which portrays a disintegrating relationship and excess, is a fuzzy, arena-ready gem, while Brand New Brain is a heartfelt, sad banger. Wombats fans will notice an experimental aesthetic, with chopped, distorted guitars and programmed drums.

“Yeah, we did kind of f— with the guitars a lot and process them heavily,” he says. “But I don’t know if that was a conscious decision. Maybe it was something to make it stand apart from the Wombats a bit as well.”

Murphy’s written more than 30 songs for Love Fame Tragedy, recording about a dozen of those so far. Future releases will feature more collaborations, this time with Dan Smith from Bastille and the Crystal Fighters’ Eleanor Fletcher.

His new band (comprising Californian filmmaker/guitarist Boaz Roberts, Coast Modern drummer Steph Barker and bassist Hayley Jane Batt) will arrive in Australia having only played a handful of shows together in the UK and US. But Murphy says the project will stretch on into next year, before his attention turns back to the Wombats.