Anyone who knows Oscar Wilde’s story The Happy Prince may wonder how a tale so sad can be made into a ballet the choreographer says is especially for children. Except that the choreographer is Graeme Murphy and, as ever, he has some fun up his sleeve.

Along with designer Kim Carpenter and composer Christopher Gordon, Murphy has devised a work for the Australian Ballet that delves into the liberating power of self-sacrifice and its rewards in an after-life for those who believe in it. 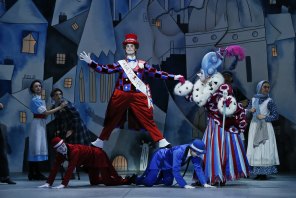 Luke Marchant and Jarryd Madden in The Happy Prince.Credit:Jeff Busby

At the same time, he eases the pain with a light touch and some changes of scene. His swallows are not migrating to the warmth of Egypt to stay alive, they are going further south to Australia, sending back postcards – “Wish you were here” – and landing on a crowded beach of frolicking sun-lovers.

While this takes the edge off Oscar Wilde’s drama, it is a cheering variation the audience and an engaging insight into Murphy’s characteristic range of themes. Besides thematic threads, there are old as well as new choreographic riches to be enjoyed in this full-length work, which has made its debut in Murphy’s 70th year. This was its world premiere: Sydney will see it in November.

That’s when I suspect I will pick up even more references to Murphy’s choreographic output and broader influences in the design – a Brett Whiteley landscape, a famous beach painting at the Art Gallery of NSW – as well as in the tuneful score with some echoes of West Side Story amongst other stylistic links.

Kim Carpenter has excelled himself with a set design of European village houses that instantly creates a once-upon-a-time atmosphere, and converts many times over through some demanding technical changes. I did worry about the tsunami wave at the end – was there a momentous conclusion in store that even Wilde would not have foreseen? Or was it just big surf?

Carpenter’s costumes range from the drabness of the poor townsfolk to the amusingly outrageous gear of the councillors and the beautifully integrated colours of the reeds, whose chorus line is a highlight from every point of view.

Christopher Gordon’s score is a masterful piece of storytelling in itself, partnering every twist and turn of the plot in cleanly orchestrated lines.

The dancing on opening night was terrific. Adam Bull gave a thoughtful and poignant portrayal of the Prince, a statue that gives away even the precious stones of his eyes to help the needy. As the little swallow who gives up his life in staying to deliver these gifts, Marcus Morelli is again outstanding in his gymnastic and balletic skills.

Cameo roles abound. Benedicte Bemet is memorable as the little match girl with – literally – a fighting spirit. Nathan Brook is convincing as a tortured artist; Corey Herbert draws sympathy as the seamstress; Jarryd Madden is a hoot as the lady mayoress. Members of the corps de ballet take on everything from toys to townsfolk with vigour and conviction.

The Happy Prince is a clever work that should delight both newcomers and longtime admirers of Murphy’s vividly theatrical choreography. There is lots to enjoy.