Lil Nas X’s boyfriend has a wife and child in a new ‘Maury’ spoof loosely based on the rapper’s ‘That’s What I Want’ music video.

Lil Nas X has continued his reign as the king of the internet with a Maury spoof. The rapper, born Montero Lamar Hill, 22, partnered with veteran talk show host Maury Povich for a hilarious parody segment tied to the plot featured in his “That’s What I Want” music video. The Grammy winner stars as Montero in the skit, a football player (much like in the music video) who learns that his boyfriend (played by real ex and music video co-star Yai Ariza) is married and has a child with another woman.

In the segment published on Wednesday, Nov. 17, Maury calls the love triangle “one of the most scandalous stories” he has ever heard on his long-running show, famed for its segments centered on DNA and lie detector tests to prove paternity, much to the outrageous delight of a very verbal audience. In the bit, Montero explains that he and Yai fell in love at football practice and “could not keep our hands off each other,” adding, “I feel like a damn fool. He’s been lying to me.”

“Don’t get me started on that damn baby,” he continues. “I want somebody who loves me. How can you love me and Ashley at the same time? He told me he didn’t even want to be with her. He wants me. When we’re together, it’s always about us.” The rapper adds, “He doesn’t love her and he doesn’t think that’s his child. That baby looks nothing like him and it’s not his baby. Maury, look at this baby. This baby could be your baby!” 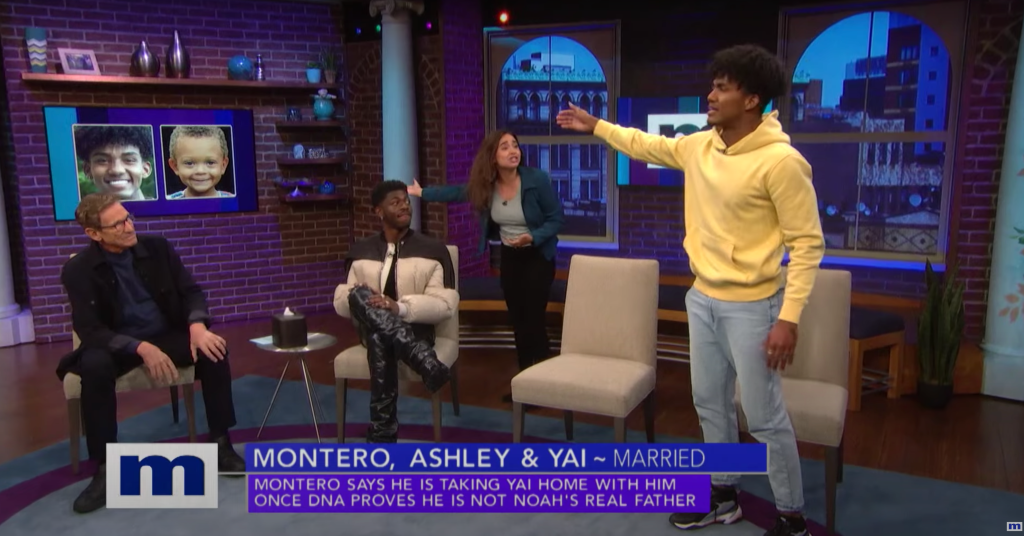 Deeper into the roughly 20 minute segment, Ashley calls the “Industry Baby” rapper a liar and “homewrecker.” Of course, in true Maury fashion, a DNA test is later employed, revealing that Yai is not, in fact, the father of Ashley’s 4-year-old child. While Yai admitted that he wanted to leave his wife for Montero, it’s revealed that he slept with a handful of other people during the course of his relationship with Montero, prompting the latter to storm out of the studio.

Lil Nas X confirmed that he and Yai previously dated while on SiriusXM’s Hits 1 LA in October, revealing that the two are “still on very good terms.” The Maury spoof is the rapper’s latest show of parody ingenuity. He previously announced the release of his debut album Montero with a pregnancy photoshoot (prosthetic baby bump in tow), paralleling the release to the birth of his child.