‘RHONY’ stars ‘had a pact’ to leave party when Eboni K. Williams arrived

“Hell no bitch. It’s a wrap,” she wrote on her Instagram Story alongside a photo of cigarettes in an ashtray, seemingly referring to co-star Heather Thomson’s claim in the same book that Morgan let men “put lit cigarettes in her vagina.”

McSweeney, 39, has since deleted that Instagram Story, but added another one with an excerpt from the new tell-all of Morgan, 57, spilling “RHONY” behind-the-scenes gossip when McSweeney’s younger sister joined them for a cast trip to Newport, R.I. in Season 12. 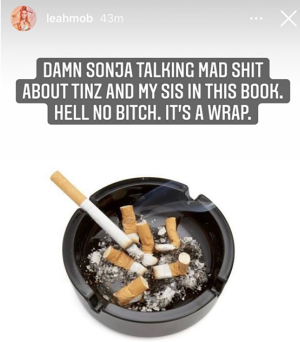 “God, that sister was a nightmare off camera,” Morgan told Quinn in the book. “She went apes–t on me. She had me and Ramona hiding under a table to get away from her. She just kept coming at me and coming at me, and Ramona started crying, because Leah was like f–ked-up, daytime, nighttime, everything. It was so bad.”

McSweeney wrote under the passage, “This is totally untrue and I would never ever tell what goes on with Sonja that gets cut out.” 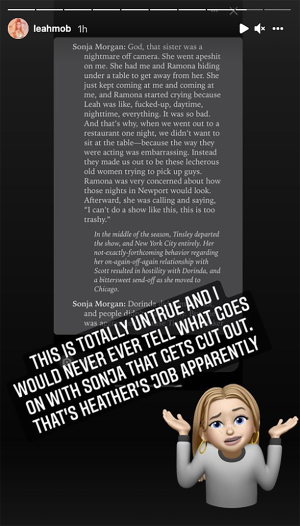 Morgan claimed that this unaired drama caused she and Singer to not want to sit with the McSweeneys at dinner later that night. “The way they were acting was embarrassing,” Morgan said.

The Newport dinner turned disastrous when Morgan and Singer wanted to mingle with men, but the rest of the group wanted to have a girls dinner. Morgan claimed that her co-stars made them out to be “lecherous old women trying to pick up guys.”

Morgan said that Singer even considered quitting after the Newport trip saying, “Afterward, she [Singer] was calling me and saying, ‘I can’t do a show like this, this is too trashy.’”

Meanwhile, “Not All Diamonds and Rosé,” which hit shelves on Tuesday, had its own drama at the launch party, with sources telling Page Six that three women — including McSweeney — had a pact to leave the soirée when their co-star Eboni K. Williams arrived.

“They fled as soon as she walked in,” the spy dished to Page Six.