Stables, rabbit hutches, pigsties … all places you would expect to find hay. But on the kitchen table? Not really.

At Chris Hruskova’s East London bakery, however, there are piles of the stuff everywhere: strewn across worktops, bulging out of bowls and even baking in the oven.

It looks — and smells — more like a farmyard than a professional kitchen.

But Chris, a Michelin-starred chef, assures me it’s all in the name of a new trend which is taking the food world by storm.

Cookery experts across the country are using hay — yes, bog-standard dried grass — to flavour cuts of meat, fish, vegetables and even desserts.

As a food writer, I’ve trialled my fair share of weird and wonderful gastronomic fads over the years — from baking cakes with kale to cooking with insect flour. But this is up there with the strangest.

‘It sounds a little odd if you’ve never tried it before,’ admits Chris, a Danish culinary whizz who has been cooking with hay for more than a decade. 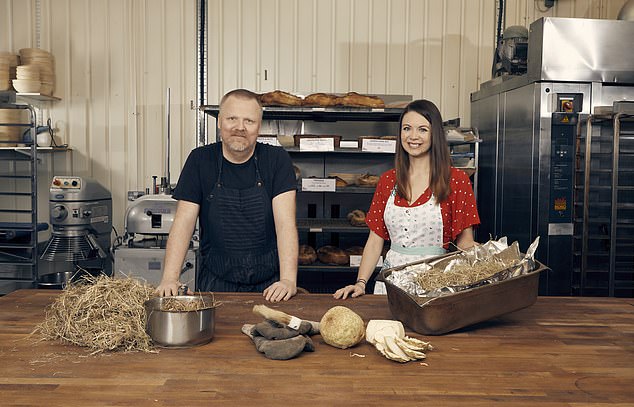 At Chris Hruskova’s East London bakery, however, there are piles of straw everywhere: strewn across worktops, bulging out of bowls and even baking in the oven (Chris with Sarah Rainey)

‘But it’s a very versatile ingredient and it gives a lovely mellow, nutty flavour. They’ve been using it in Scandinavia for hundreds of years.’

Cooking with hay dates back as far as the 8th century, when Vikings used dried grass and leaves from birch trees to smoke and preserve meat and fish.

By the 11th century, the Normans were wrapping wild boar in hay to add flavour, before slow-roasting it in a fire pit.

But it would be many centuries before the humble haystack made its debut in modern European cookery, popping up at cutting-edge Copenhagen restaurant Noma in the form of hay-infused butter and hay parfait, in 2010.

Chris put it on the menu at North Road, his former Michelin-starred restaurant in North London, offering diners venison rolled in burnt hay, roast pork wrapped in hay and, his most madcap invention to date, hay ice cream.

‘Recently chefs have started looking back at their heritage and rediscovering all sorts of wonderful techniques. 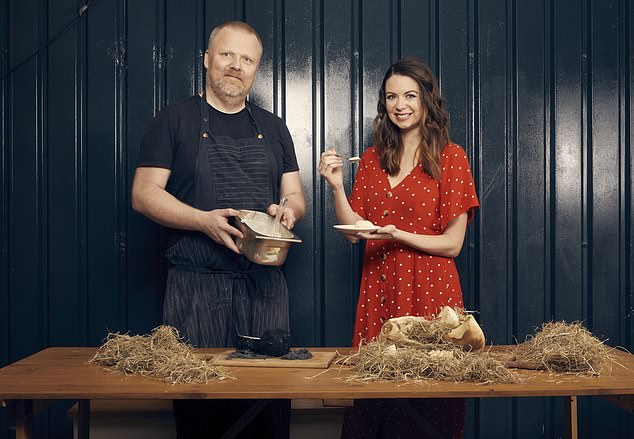 But Chris, a Michelin-starred chef, assures me it’s all in the name of a new trend which is taking the food world by storm (pictured with Sarah Rainey)

Using hay is one of them,’ he says. ‘It’s a natural accompaniment to meat — many animals spend their lives rolling in it — and it’s a surprising, pleasant addition to sweet dishes.’

Today, in the kitchen of his new bakery venture, The Bread Station in East London, he’s teaching me to channel my inner Viking.

First up, the hay itself (dried grass); not to be confused with straw (dried stalks of wheat).

To my horror, it comes in an enormous plastic bag with a picture of a rabbit on the front — and Chris confirms all my worst suspicions.

‘I got this from the pet shop,’ he says. ‘When I first started using hay, I bought it from a forager, which cost a lot of money.

‘Then I realised the pet shop version was just the same, but far cheaper. This was £3.25 for 1kg.’

The best type, he says, is ‘meadow hay’, which has dried flowers (usually dandelions and marigolds) and leaves mixed in with it.

‘These add subtle flavour,’ he explains. There’s no need to wash or otherwise treat it before you use it — and you don’t need a huge amount. ‘In the ice cream, I use 100 g of hay in a one-litre tub.’

So far, so unappetising, but we plough on. There are four main ways to use hay in cooking, all of which apparently give different flavours and textures.

The first is simply wrapping meat or vegetables in hay and slow-roasting them: Chris suggests root veg or a strong, gamey meat such as venison or pork.

He demonstrates with a celeriac, tightly-wrapped in a bundle of hay then covered in a ‘salt dough’ (half flour, half salt and water) to draw out moisture. 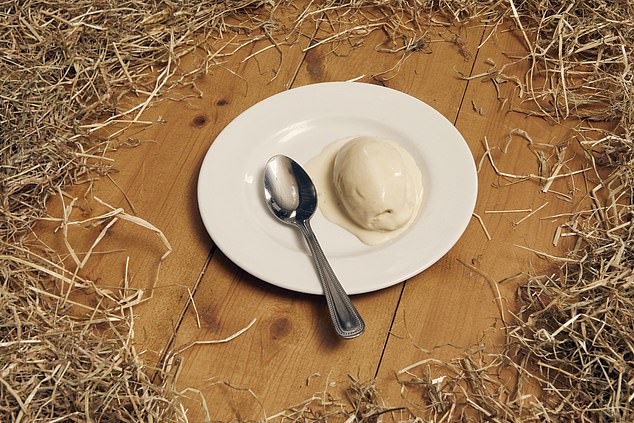 Cookery experts across the country are using hay — yes, bog-standard dried grass — to flavour cuts of meat, fish, vegetables and even desserts

After two hours in the oven, it comes out steaming and earthy. The taste is a little like it’s been rolled in mud, but I can see how it would work with a generous glug of gravy.

First, you’ll need to source some hay. Meadow hay is best, and look for a type that’s organic and pesticide-free.

Peel, top and tail and then chop 600 g of carrots into large batons. Arrange them in a roasting dish, dot with knobs of butter and season with plenty of sea salt.

Arrange a layer of hay over the top of the carrots and tuck it down the sides of the roasting dish so they’re sealed in. Then pour 200 ml water over the hay. Cover the whole thing with tin foil and press down the edges.

Let the tray of carrots rest for ten to 15 minutes before uncovering, removing the hay and serving.

To smoke meat or fish, you wet the hay and lay it over an open grill or fire — a technique used by Heston Blumenthal to smoke mackerel at his London eaterie Dinner.

In his hometown in Denmark, Chris says, this is a traditional way of smoking cheese: ‘It gives a delicate flavour and it infuses quickly, so you don’t need to smoke it for long.’

For a stronger, more acidic taste, there’s burnt hay — Chris puts a lighter to a metal bowl of the stuff and flames shoot upwards.

Plumes of smoke fill the air and, within seconds, the hay is crisp and blackened.

It’s certainly theatrical, but the building smells like a bonfire. The charred remains can be rubbed on steak, sprinkled on salads or added to soups, stews or sauces.

‘It’s got a smoky, barbecue-like flavour,’ Chris says. ‘You only need a pinch, as it’s quite strong, but it can really transform a dish.’

The final use for hay — and the one I’m most sceptical about — is infusing it. In recent months, British chefs have flavoured everything from mayonnaise to yoghurt, salad dressing and bread — while Chris’s speciality is hay-infused ice cream.

For this, he mixes double cream, milk and caster sugar in a pan, boils it, adds egg yolks, then stirs in a big handful of hay. 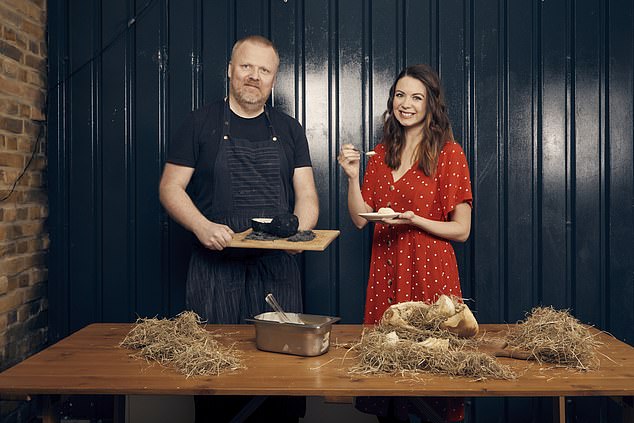 To smoke meat or fish, you wet the hay and lay it over an open grill or fire — a technique used by Heston Blumenthal to smoke mackerel at his London eaterie Dinner

Ideally, it should be left overnight, so all the flavours of the grass seep into the liquid, before being churned and frozen.

‘This started life as an experiment,’ he admits. ‘I wanted to create a nutty flavour without using nuts, and hay does just that. It’s got a unique taste.’

It’s unlike anything I’ve ever tasted before. It’s rich and creamy, half-sweet and half-savoury, and tastes a bit like milky tea.

Yet I can’t help but imagine I’m licking the inside of a hamster’s cage.

An experience to try once, perhaps. But Chris insists cooking with hay is a trend that’s here to stay — and not just for top chefs.

‘It’s a really good one to do at home, maybe if you want the wow factor at a dinner party. Hay is plentiful, cheap and easy to use. There’s no reason not to try it.’

So, hay fever is coming soon to a kitchen near you.

But unlike other daft food fads, this one has its roots in history, and there’s something to be said for choosing natural resources over mass-produced fast food.

If you feel adventurous, why not give it a go?

Turns out that hay is for horses . . . and main courses.