Victorian Labor’s state secretary Clare Burns has resigned from her post following months of debate about whether it was appropriate for her to return from maternity leave.

The former candidate for state parliament was appointed in 2019 and left in early in 2020 to have a baby and live with her partner in Canberra. 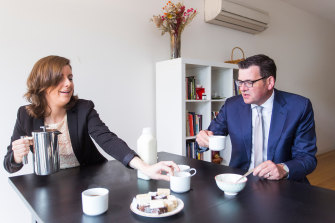 Premier Daniel Andrews with Clare Burns in 2017, when she lost in the Northcote byelection.Credit:Paul Jeffers

Months after she left for the national capital, former powerbroker Adem Somyurek – who helped install Ms Burns into the role – was expelled from the party over branch stacking allegations.

Party figures including MPs and union leaders told The Age in June that Ms Burns should not return from leave because of her association with Mr Somyurek, whose faction was dominant when Ms Burns was appointed.

Premier Daniel Andrews backed her return amid the criticism and Ms Burns previously insisted she wanted to retake her role from next month, labelling her detractors backward for attempting to block a woman’s return to work after childbirth.

But on Thursday she told party leaders she would be quitting. “I wish you and all of the team at Victorian Labor every success over the coming 15 months as you work to secure strong, progressive Labor governments for our state and country,” she wrote in a letter to party state president Susie Byers. 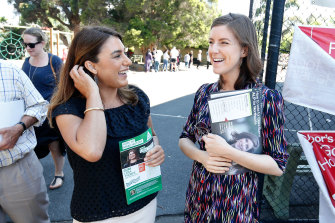 Clare Burns (right) with Lidia Thorpe, who won the seat of Northcote in 2017.Credit:Darrian Traynor

Ms Burns will remain in Canberra with her partner, baby daughter and stepchild.

Acting state secretary Chris Ford, who has been leading the party’s preparation for the coming state and federal elections, is expected to continue as the permanent party boss.

Ms Burns’ resignation came amid a police probe and internal party investigation into former Moreland councillor Milad El-Halabi, who is suspected to have engaged in widespread vote tampering. No charges have been laid over the issue.

Police have interviewed party officials to analyse the candidate vetting process that picked Mr El-Halabi. The party has hired external investigators to probe the matter. Ms Burns was party boss at the time Mr El-Halabi was selected, but there is no suggestion she acted improperly.

The fight over Ms Burns’ return was the most recent proxy battle in the war for control of the state branch, which was dissolved in the wake of Mr Somyurek leaving the party last year. Some of the unions and factional bosses fighting the Labor Party in an ongoing court case – including the Australian Workers Union and officials aligned with former leader Bill Shorten – favoured Ms Burns returning.

The forces that benefited from the power vacuum created by Mr Somyurek – including the Socialist Left, the Shop, Distributive and Allied Employees’ Association union and those aligned with the party’s deputy federal leader Richard Marles – wanted Mr Ford to keep the role.

Mr Somyurek is suing The Age for defamation over stories alleging he was a branch stacker.