Nine News reported the Australian-British academic landed in Canberra on Friday afternoon and showed photos of Dr Moore-Gilbert walking from a plane to a white van. The 33-year-old will now spend two weeks in quarantine. 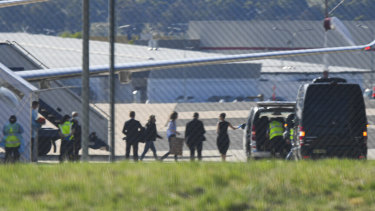 Passengers, including who is believed to be British-Australian academic Dr. Kylie Moore-Gilbert, disembark an government jet at Canberra Airport.Credit:AAP

"She will have to go through the quarantine process, but she won't be doing that alone, we will make sure she is well supported and is able to just adjust after so long in detention to life back in Australia and to reuniting with her family in Australia in due course," Foreign Minister Marise Payne told 2GB on Thursday.

Dr Moore-Gilbert was released on Thursday morning in exchange for three Iranian men linked to a botched 2012 bomb plot in Bangkok.

The Australian government played a crucial behind-the-scenes role in bringing Thailand to the table and engineering the prisoner swap deal that has allowed Dr Moore-Gilbert to be released.

Multiple senior government and diplomatic sources confirmed that Dr Moore-Gilbert was detained in Iran in 2018 after authorities found out her partner was Israeli.

Following her release on Thursday, Dr Moore-Gilbert thanked those who had worked on her case.

"Thank you also to all of you who have supported me and campaigned for my freedom, it has meant the world to me to have you behind me throughout what has been a long and traumatic ordeal," she said in a statement released on Thursday morning.

"It is with bittersweet feelings that I depart your country, despite the injustices which I have been subjected to," the 33-year-old Australian-British academic said.

"I came to Iran as a friend and with friendly intentions, and depart Iran with those sentiments not only still intact, but strengthened."

The Department of Foreign Affairs has been contacted for comment.

Catch all the day’s headlines

At the end of each day, we’ll send you the most important breaking news headlines, evening entertainment ideas and a long read to enjoy.  Sign up to The Sydney Morning Herald’s newsletter here, The Age’s here, Brisbane Times’ here, and WAtoday’s here.