The trio, born within three years of each other and now in their 60s, grew up together as part of the sprawling Kennedy dynasty and remain extremely close, with Maria describing their relationship as more like ‘sisters’.

With their carefully coiffed highlighted hair, matching megawatt smiles and simple black tops, Maria, 66, Sydney, 65, and Caroline, 63, certainly could have passed for siblings as they spent the night catching up in a cozy corner of an upmarket New York eatery earlier this week.

A photo of the long-awaited family get-together was shared by Maria on Instagram yesterday. 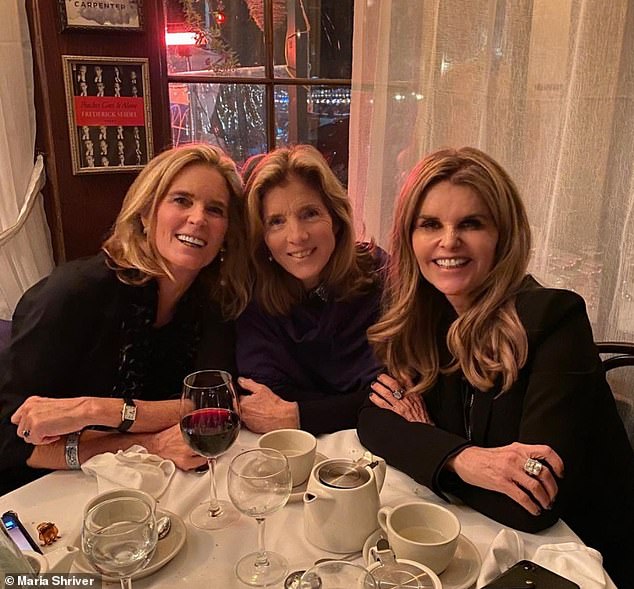 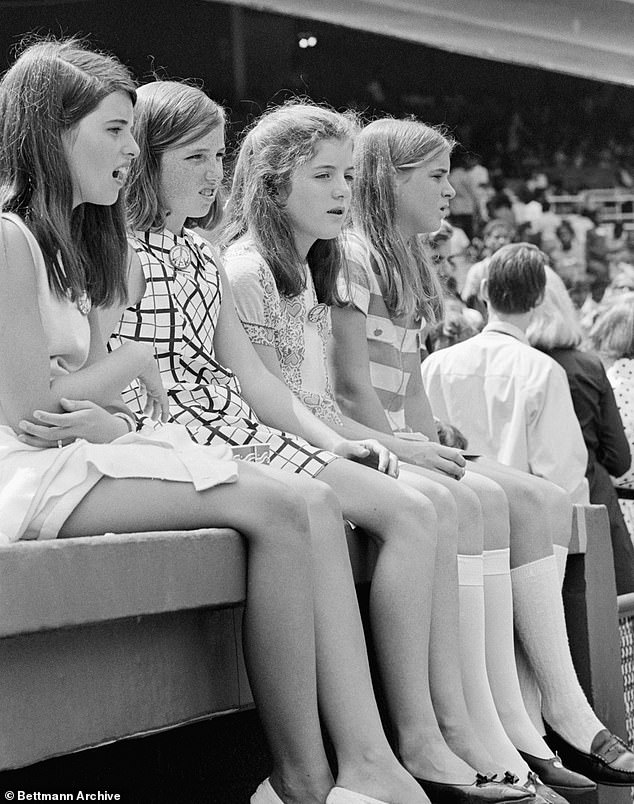 Lifelong bond: The trio, born within three years of each other and now in their 60s, grew up together as part of the sprawling Kennedy dynasty and remain extremely close. Pictured from left-right: Maria, Courtney Kennedy (their cousin), Caroline, and Sydney in 1969 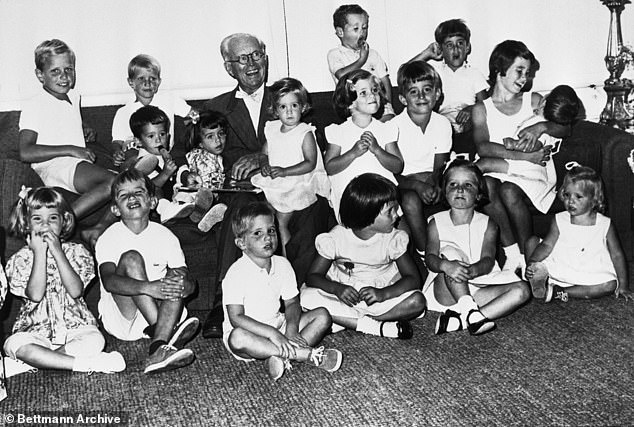 ‘These two! They are everything to me,’ she wrote. ‘Last night, here in the Big Apple, I got to break bread and break into laughter with my two cousins, @sydneylmck and @amb_kennedy.

‘I never had a sister, but these two have made up for that. I’ve known them my entire life. I hadn’t seen them since before covid — our longest stretch not seeing one another.

‘How glorious to be reunited! To not skip a beat. I left feeling full, feeling blessed, and hopeful that we will gather again soon.

‘I hope you have people in your life where you can pick up right where you left up, who make you feel seen and safe, who love you no matter what you order or what you eat, who just love the heck out of you! Nothing else on life comes close!’

Maria, the ex-wife of Hollywood action star-turned-politician Arnold Schwarzenegger, was the daughter of Eunice Kennedy Shriver, the fifth of nine children of Joseph P. Kennedy, Sr., and Rose Fitzgerald, and Sargent Shriver, a US Ambassador to France and onetime Vice Presidential nominee. 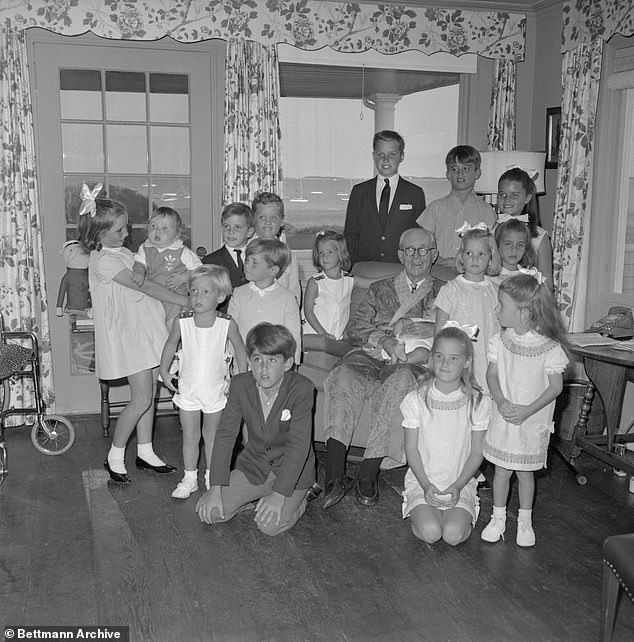 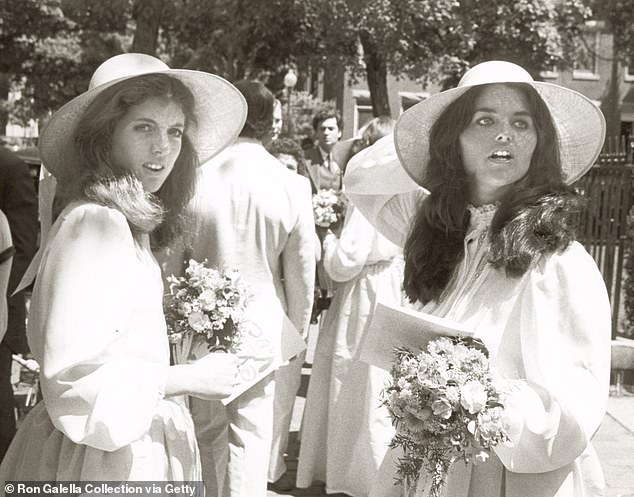 Family milestones: Caroline (left) and Maria (right) were bridesmaids at the wedding of their cousin, Courtney Kennedy, in 1980 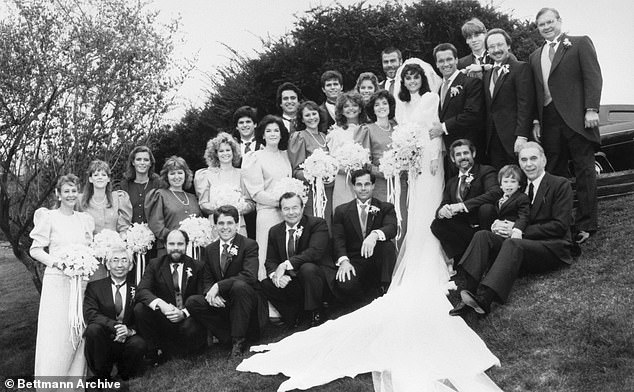 By each other’s sides: When Caroline and Maria married their respective partners in 1986, they served as each other’s maid of honor. Pictured, Maria on her wedding day to Arnold Schwarzenegger in 1986. Her bridesmaids also included her cousins Sydney and Courtney

Although she had four brothers – one older and three younger – she spent much of her childhood in the company of her female cousins, horse riding and holidaying at the Kennedy compound in Cape Cod.

A look at the Kennedy family photo album shows Maria attending glittering functions, watching the tennis and soaking up the sun with an ever-changing line-up of relatives, although Caroline, the only surviving child of John F. Kennedy and his wife, Jacqueline, appears most frequently.

One particularly sweet photograph shows JFK aboard the Honey Fitz off Cape Cod with his young daughter and Maria.

Their bond remains unbreakable. When Caroline and Maria married their respective partners in 1986, they served as each other’s maid of honor. 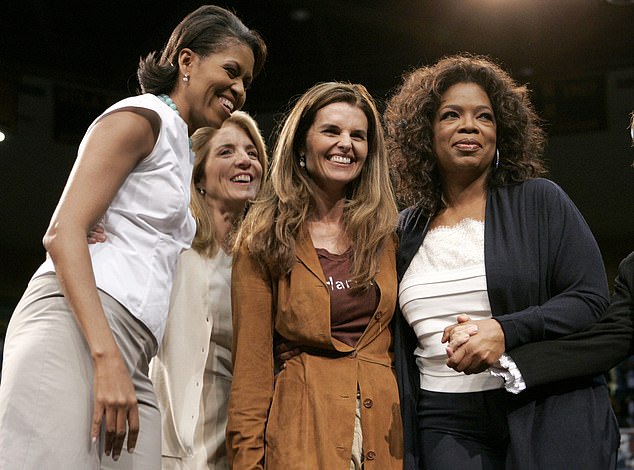 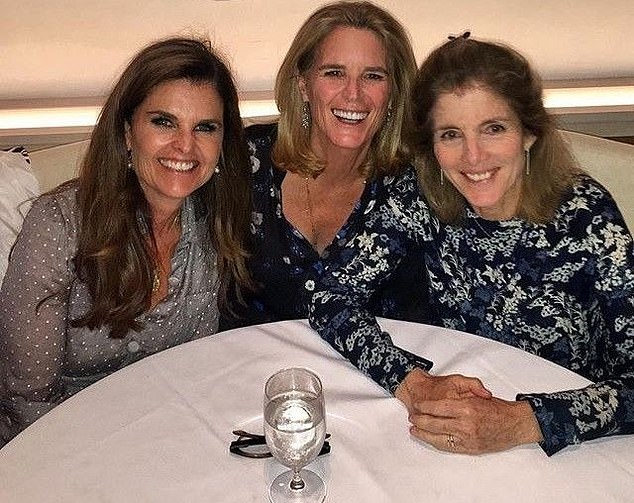 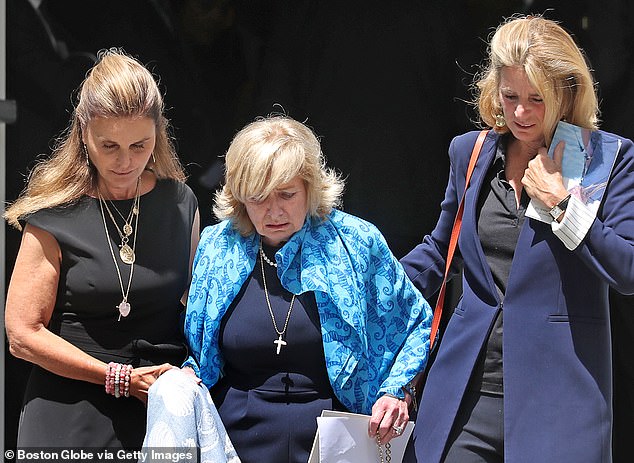 Sydney, daughter of Patricia Kennedy Lawford, the sixth of the Kennedy children, and English actor Peter Lawford, was bridesmaid at both.

Caroline also rallied around Maria following her divorce from Schwarzenegger, and reportedly warned her cousin off against a rumored reconciliation.

Caroline and Maria stood by their cousin Courtney Kennedy Hill’s side as she attended the funeral of her daughter Saoirse Roisin Hill, who died at the Kennedy compound in 2019.

Writing at the time, Maria said she was ‘furious at God’ for taking her cousin’s ‘only child away’.