There’s a meme that does the rounds on Instagram: “Everyone you meet is fighting a battle you know nothing about.”

True that. Because despite Brené Brown spruiking vulnerability as the new strong, most of us are still determined to put on a brave face, no matter what we might be going through. We are adept at keeping it together, working overtime to convince those around us that we’re doing just fine. 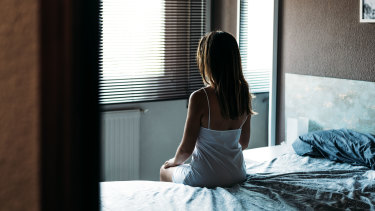 “You can view any challenge as a possibility. You just need to identify what steps you must take to find it.”Credit:Stocksy

I’m a master at it myself. There was a time I became well acquainted with the make-up room at work, and not just to reapply mascara. It was where I went to seek refuge. My home life was in turmoil and it took all my strength to keep going. But keep going I had to because, as a news presenter on air for up to seven hours at a time, I couldn’t afford to let the cracks show.

I would retreat to that little safe haven to breathe, sometimes cry, then whip back up on set as if nothing had happened. But why do we feel the need to present a mask of togetherness to the outside world when the reality is anything but?

Three women who have been through upheaval in their personal lives tell me why they were determined to soldier on.

“I was constantly on edge”

Tory Archbold was running one of Australia’s leading PR companies when she walked away from a toxic relationship.

“I built a global business based on my values – passion, integrity, delivery which attracted the world’s leading brands and was responsible for some of the most iconic campaigns in retail history. I was at the height of my career, building a global business, with the big brands knocking on my door.
But my personal life was incredibly challenging. The challenge was around how I could protect my child and myself so that we can go on and lead a happy balanced life.

I was in a toxic relationship with my then-partner which wasn’t good for me or my daughter, so I left when she was nine months old. I was granted an AVO, which gave some relief. There wasn’t a day that went by when I didn’t have that feeling in the pit of my stomach and a voice in my head asking

‘When is this going to come to an end?’ I was constantly on edge. I had 22 staff at the time and I didn’t tell any of them. Even my assistant didn’t know the full extent.

I felt that if people knew what I was dealing with, they’d expect it to affect my performance negatively. In fact, it enabled me to perform better. I found I could put my energy into work and deliver incredible results because I was so focused on escaping what was going on in the rest of my life.

When I came home it was like, ‘Okay, what do I want to do for my daughter so she’s not affected by what’s going on?’

I kept it all together. I didn’t have a choice because I had a daughter who needed a mum and I had a business. I didn’t have a family network. But I have this incredibly powerful network of women who helped us through it. My friends are like our family.

I don’t think I actually broke down until it was all resolved. I’ve never cried like that. It was just sheer relief because I was like, ‘Oh my god, I’ve got my life back. My life can begin.’

My new business, Powerful Steps, came off the back of this. You can view any challenge as a possibility. You just need to identify what steps you must take to find it.”

Neen Weir was happily married with three young children when her husband of 24 years died by suicide in 2014.

“I was a vibrant, capable, intelligent woman and overnight it was like my brain stopped functioning. I had the biggest hole in my chest and I was left paralysed in terms of my capabilities. It was a matter of how do I survive this each day? How do I project that it’s okay? How do I fake it? How do I smile so people aren’t scared of the widow?

I was trying to keep it together for my children’s sake. I wanted them to see that I could drive a car again, make a meal again, that I could take them on a holiday and I could do everything that Dad did. That I was okay and had both roles covered.

People would give me books on grief and I’d go to counselling and smile sweetly but I was in so much pain I couldn’t even process what grief was.  I wanted to be out of the pain and in the arms of the only person who could soothe the pain, and he was dead.

Socially, people don’t know how to handle grief. When the funeral is over everyone goes, and when they see you again they don’t know what to say. If they ask if you’re all right, they don’t want to hear that you’re still in the worst place of your life. So you smile and say, ‘Yeah, we’re okay,’ because otherwise you have no connection with them ever again.

My husband’s death was also the death of one of their friends, so they had their own grief. And I didn’t have the capacity to support them through that. Talking about Adam triggered us all. So we had to avoid the elephant in the room. My husband was dead.

I would go home and cry in the corner. I had to keep it together until the kids were in bed, or after they left for school. Then I could fall apart next to the bookshelf. But I showed no signs of it to my children because if I went down, they went down.

I couldn’t handle it and 18 months later I broke apart. It was a sudden realisation that I had to go deeper.

I had to face the inner pain. I studied Vedic meditation to still the stress in my head and increase my ability to handle anything thrown at me.

I also had an amazing kinesiologist who’s a wizard with neuro-emotional technique, which tackles deep-rooted stress. I started to understand the post-traumatic stress I was going through, and as I worked through it I felt optimistic. I was going to be a rock star again. In fact, I might even be a greater, more vibrant rock star than I ever was.”

“I wonder how I survived”

Emily*, a schoolteacher, left her home and marriage with her two young children before enduring a drawn-out and acrimonious court case.

“Looking back, it’s like a black hole. It just sucked everything in. I wonder how I survived it. I was a lot stronger than I give myself credit for when I think of going back to full-time work and getting a promotion while simultaneously fighting a really vitriolic and nasty court case with my ex-husband, who was astonishingly litigious. You have to be strong for your children and you have to pull
it together.

There were times when I couldn’t compartmentalise. One day, I was teaching a class and a series of emails came in from a barrister about a cost dispute associated with the litigation.

I literally walked out, left all the students there, and walked into one of my colleague’s offices, collapsed on the floor and burst into tears. My colleague told the students to go and arranged for my sister to come in and get me. And she recommended her own psychologist and made an appointment.

Most of the time I was holding it together at work. But the court case became so ferocious I needed to take time off and my supervisor arranged for me to have my work covered for the next few weeks until I was back on board. I also had access to paid domestic violence leave.

I was frightened by my ex-husband. And I was really worried about money – the legal bills, the fear of losing the family house. You’re juggling this fear of being economically destitute with worrying about your child’s mental health. You’re haemorrhaging more and more money to the lawyers.

It’s not like I went around telling everyone. But the important people knew enough and made sure I had the support I needed.

I carried a massive workload in the lead-up to and during the trial. I was able to do that because I had colleagues who understood and were willing to be accommodating and flexible. I could bring my shit to work if I had to. No one judged me. I didn’t have to put on a happy face and that made it easier.

Because I was not forced to compartmentalise – not having to pretend, not having to always put on
a brave face – it helped me. My thing was always walking. I’d walk it out. I used to walk to and from work and I process stuff in my head while I did it. It’s a moment of separation. I feel more myself now. After this insanely long stressful marriage, I feel like time stood still for 20 years and now I’m asking myself, ‘Who am I?’

I’m making choices for myself. I can do what I want – with reason. I’m still a single mother with two kids and carry all of those responsibilities. But things are much brighter.”

This article appears in Sunday Life magazine within the Sun-Herald and the Sunday Age on sale November 24.