Katy Perry may have a new man in her future according to TikTok’s M.A.S.H. game.

The 37-year-old “Firework” singer took part in the platform’s new viral trend where participants use a filter to play the childhood future telling game that determines your house, car, number of children and partner.

Perry drew a lucky hand and the filter prophesied that she would live in a castle, drive a Tesla and have six children. Although the singer currently shares her daughter Daisy with her fiancé Orlando Bloom, the “Roar” artist drew Pete Davidson as her future lover.

“No offense @Kim Kardashian,” she joked referring to Davidson’s girlfriend Kim Kardashian in the caption of her post, “and Orlando?” she jokingly added.

Although the M.A.S.H filter may have predicted the “SNL” alum to be in her cards, it doesn’t seem Perry will consider saying goodbye to Bloom anytime soon. The couple first began their on and off relationship in 2016 until getting engaged in 2019.

Back in March 2020, the pair announced the arrival of their daughter whom they welcomed in August of that year.

Earlier this year in February, Katy addressed rumors that she and Orlando were already married during a virtual appearance on Australia’s “Kyle and Jackie O Show” after she was photographed wearing a gold band on her finger. 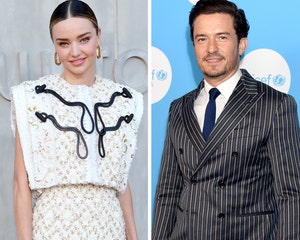 Perry squashed all speculation and confirmed that she and Orlando have yet to undergo their nuptials.

“Have you and Orlando got married secretly or you just dragging this out? Or are you not sure? What’s going on there?” host Kyle Sandilands asked.

Although wedding plans may be hard to solidify right now, she confirmed that when things meet an end with the pandemic, it’s definitely time to “party.”