Japan, which is hosting itsfirst ever G20 Summit in Osaka this month, also has an extreme work culture, according to Keisuke Nakashima, associate professor at Kobe City University of Foreign Studies and senior associate at the Global Aging Institute. Hepreviously told Business Insider employees are expected to work into the night, go out drinking with colleagues, and potentially move across the country or elsewhere for career opportunities.

“If you are single, it is difficult to find a good and right partner for marriage,” Nakashima says. “If you are married, and if both husband and wife work like this, there’s a slim chance to have a baby. No time or no energy left. If you want a baby, you (typically your wife) face a choice — continue to work or quit your job and have a baby. There’s a trade-off here.”

Fewer babies could result in a troubled economy marked by labor shortages and disintegrating social security, according to Timsit. Not to mention thepossibility of extinction— one team of economists set up a “countdown clock” to track the seconds until the last baby is born (currently in the year 3776).

The Japanese government is going to great lengths for more babies

The Japanese government has been implementing extreme measures to prevent the demographic time bomb from exploding.

In 2016, Prime Minister Shinzo Abe declared that Japan will raise its fertility rate from 1.4 to 1.8 expected children per woman. His proposedkey policies include establishing a work-life balance, improving childcare systems, and encouraging marriage.

But the government’s efforts began around 25 years ago. Since then, reported Timsit, it has established parental leave for up to a year following childbirth under partial pay; invested in subsidies for elderly care, childcare, and education; offered free preschool for children ages three to five and free childcare for low-income households with young kids; and required large companies to set goals for hiring or promoting female executives.

Meanwhile, more than 500,000 new public daycare slots have opened since 2013. Timsit reports that one town offered new moms the equivalent of $2,785 and subsidies for child care, housing, health and education.

Some local governmentsare even organizing speed-dating events to make matches happen more quickly, and people are trying tore-masculinize men to get them away from “celibacy syndrome.”

According to Timsit, the number of Japanse women working today has increased by more than 2 million over the past six years. But despite the efforts and improvements, challenges persist. Preschool isn’t always accessible and there’s a cultural stigma underlying work and childcare — mothers who take parental leave face discrimination upon their return.

Across the globe, the developed economies that have the highest birth rates are the ones with the greatest female labor participation. The data shows that to make having kids make sense for people, professionals need to be able to do so while keeping their careers on track. 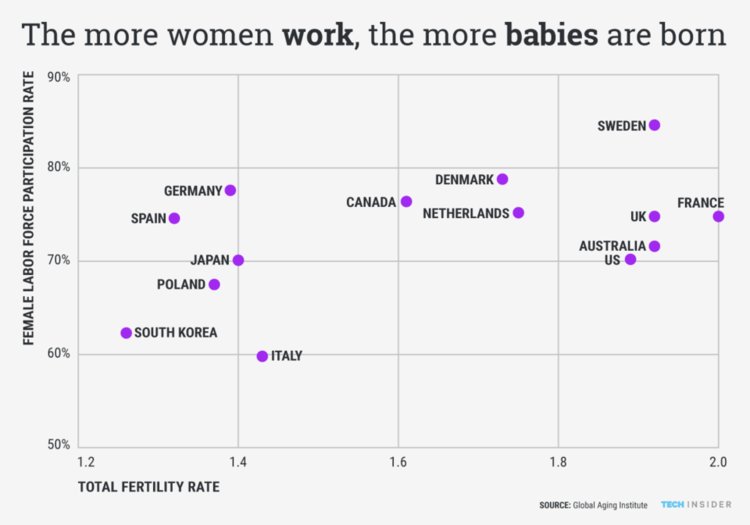