A homeowner in Canterbury has been ordered to remove the solar panels on his roof because of heritage restrictions.

Richard Barnes installed photovoltaic panels, which convert thermal energy into electricity, on the rooftop of his home in Melbourne’s east last year but received a notice from the City of Boroondara to remove them because his home is within a heritage overlay. 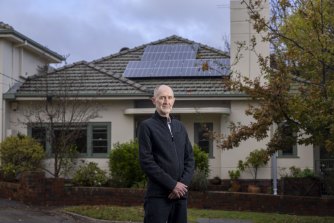 Richard Barnes was ordered by VCAT to remove solar panels from his roof because of heritage restrictions.Credit:Wayne Taylor

He challenged the decision in the Victorian Civil and Administrative Tribunal but was ordered to remove the panels by June 26.

Barnes said there was nothing more that could be done to change VCAT’s decision, but he wanted to ensure that other homeowners did not face the same battle.

Tribunal member Jane Tate found sustainability considerations “are not contained in the relevant decision guidelines of the applicable heritage policies”.

She said while the panels did not damage or alter the materiality of the Barnes’ roof, they obscured a “sizeable proportion” of the western roof panel on the principal facade.

“I consider this will detract from the heritage significance of the dwelling as it presents to the street,” she said. “Whilst the panels are obviously a modern feature that could be removed later, I consider this is unlikely given the shift towards use of renewable energy.”

Barnes already has solar hot water panels on his home’s small north-facing roof and so installed the PV panels on the east and west-facing roofs.

He said the removal of the panels would reduce the total electricity generated by his home by 40 per cent.

The City of Boroondara formally declared a climate emergency in 2021, and its action plan called for a tripling of rooftop solar in the municipality.

Simon Ambrose, chief executive of the Victorian branch of the National Trust of Australia, said the heritage group supported the use of solar panels on heritage buildings as it made them more sustainable and encouraged their ongoing use.

“The transition to solar energy needs to be balanced with the heritage values of individual places on a case-by-case basis, and in most places, it’s possible to integrate solar technology without compromising heritage significance,” he said.

“Ideally, solar panels should be installed on the rear of heritage buildings so they’re not visible from the street, particularly in significant streetscapes or precincts.”

A Victorian government spokeswoman said it was a council issue.

“State-wide planning provisions facilitate the uptake of rooftop solar, and a planning permit is not required in the vast majority of cases,” she said. “Matters regarding local planning schemes are a matter for council.”

A spokesman for the City of Boroondara said the council recognised the growing need for more sustainable energy options and supported the installation of solar panels on buildings across the municipality.

“There are some locations where the installation of solar panels must be balanced against other relevant provisions of the planning scheme,” he said. “The heritage policy enables solar panels on parts of the roof which are generally less visible from the street, rather than those on the principal roof form facing the street in a heritage precinct.”

More than 200,000 Victorians have installed solar panels, batteries or solar hot water since 2018, as part of the government’s $1.3 billion Solar Homes Program.

A guide to the environment, what’s happening to it, what’s being done about it and what it means for the future. Sign up to our fortnightly Environment newsletter here.