Isolation and inflation pretty much sum up week three of the election campaign.

With 22 days until you can get your democracy sausage and vote, there are still plenty of things for each party and its politicians to deal with. 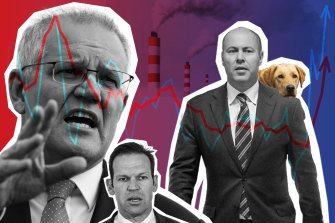 Puppies, coal power and policy dominated the conversation on the Coalition this week. Credit:Illustration: Marija Ercegovac

As Opposition Leader Anthony Albanese emerges from iso and Prime Minister Scott Morrison doubles down on rhetoric around a carbon tax, let’s take a minute to review the week gone by, starting with our week three quiz:

What are the key points this week?

Memorable quotes from the campaign this week

What will we see next week?

Think you remember everything that happened last week? Take our week two quiz and test yourself!

Need to catch up on the rest of the campaign?

Jacqueline Maley cuts through the noise of the federal election campaign with news, views and expert analysis. Sign up to our Australia Votes 2022 newsletter here.