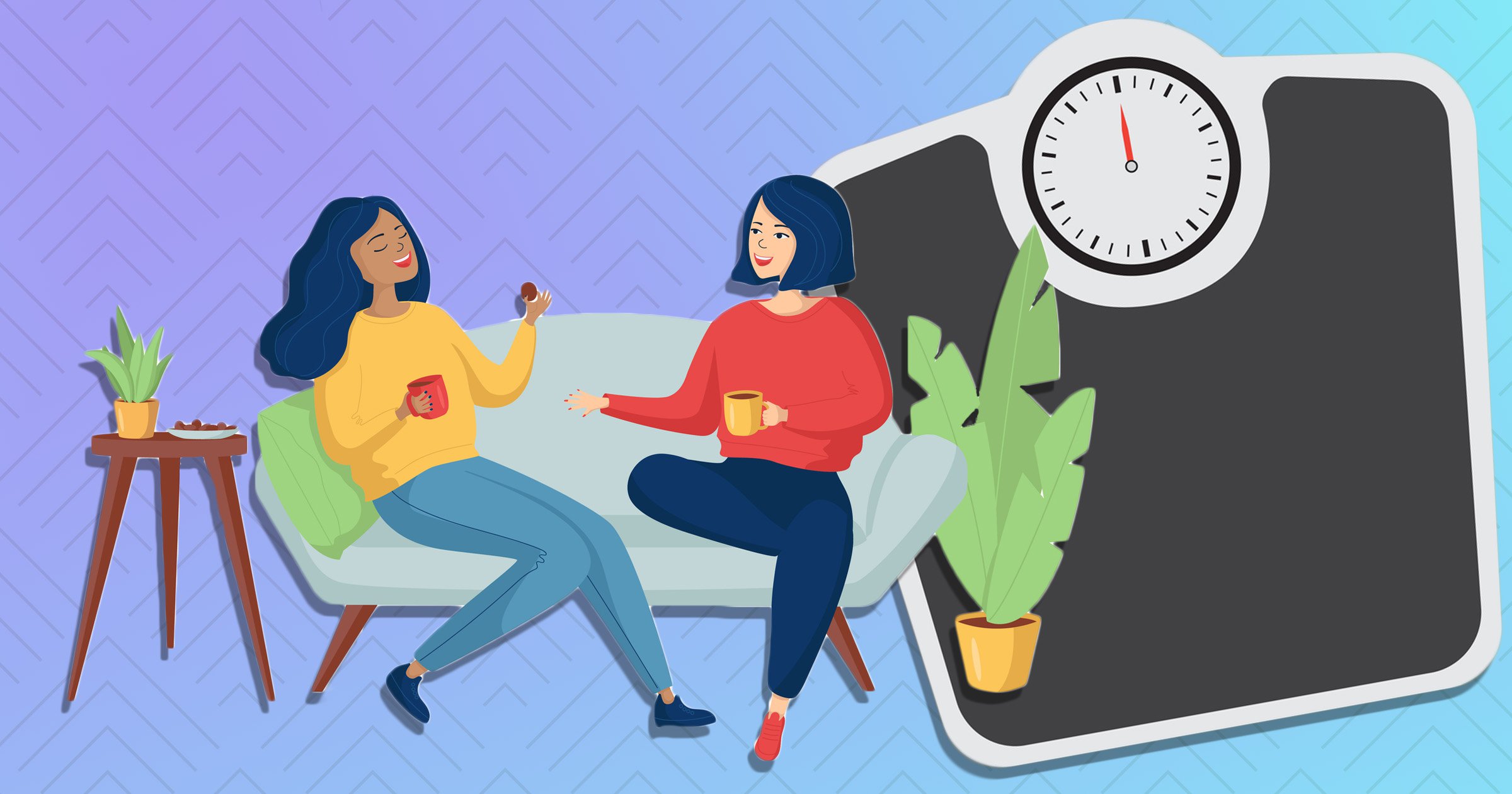 There was a time when I was addicted to being told I had lost weight.

Amid the weighted squats, diet plans, scales, and measurements were the little facets of external validation that told me I was doing well.

Whether I thought highly of my attempts didn’t matter, because at least other people could think that for me.

At the start, it felt good. I Iiked being commended for my hard work. But those compliments soon became a desperate need.

The gloss and shock of my initial weight loss became old news. When people stopped telling me I’d shed a few pounds, my mind went into overdrive, savagely tearing myself apart for not being good enough.

Quickly, I realised I wasn’t trying to lose weight for myself in the first place; I was doing it because society expected me to.

But it got me thinking about the phrase: ‘you’ve lost weight.’

It’s a tiny remark said in one breath, often and without thought. Yet, it’s an observation with myriad connotations for the person on its receiving end.

We have all done it. We have all uttered it with good intentions. However, as our conversations around weight and body image become more complex and considered, we have to ask, is it ever okay to say it? Or should we just keep this thought to ourselves?

The weight issue is its proximity and association with body image and, in turn, mental health.

According to data published by the National Institute for Health and Care Excellence (NICE), Beat and Anorexia and Bulimia Care, between 1.25 and 3.4 million people in the UK are affected by an eating disorder. The average age of onset for anorexia nervosa is 16-17 years old, while for bulimia nervosa, that age is 18-19 years old.

‘You’ve lost weight’ may seem a positive endorsement, but it can be a harmful trigger for the individuals behind those statistics.

‘My 12-year-old daughter was diagnosed with anorexia last summer,’ says Naomi*. ‘And over the last year, there have been so many comments made about her weight – mostly light-hearted compliments from well-meaning people who didn’t realise she had an eating disorder. Like the person in the clothes shop who said she’d love to have a “figure” like hers.’

Naomi says commenting on one’s appearance in such a way only adds to our obsession with being ‘thin’ and the value we place upon it.

‘Things like, ‘you look really good – have you lost weight?’ seem so harmless, but it sends the message that thinness is what’s valued,’ she tells Metro.co.uk.

‘It’s very dangerous as it can reinforce eating disorder thoughts and behaviours.

‘Whether you’re talking to a young person, or a full-grown adult, you have to realise that asking about or commenting on someone’s weight – whether positively or negatively – is just not appropriate.

‘You wouldn’t ask someone if they’d put on a few pounds, so why would you ask if they’d lost weight?’

On Twitter, I asked others for their opinions on the matter. The responses were varied. One was a busy young mother of twins dealing with such comments in the aftermath of her children’s birth. For her, the phrase’s impact depended on how it was said and whether it was rude or coming from a place of genuine concern.

Another was a man who said he had previously landed himself in trouble by commenting on someone’s weight. Now, he’ll say: ‘You’ve lost weight, not that you had any to lose in the first place.’

Some suggested that ‘you’ve lost weight’ is okay to say when you know an individual is actively trying to lose weight.

This is something Dr Deborah Lee, from Dr Fox Online Pharmacy, agrees with. She believes the comment aids those on a weight loss journey, which takes considerable dedication and strength. However, there are caveats to its use.

‘I’m a doctor with interest in diet, weight, and nutrition, and my view is that I would only comment on weight loss if it were someone I knew well and also knew they had been trying to lose weight,’ she says. ‘In that case, it’s a compliment.

‘If they respond positively, I can congratulate them on how they did it, as losing weight is so hard.’

I ask Dr Lee if this affirmation should be repeated only once and explain my personal experiences with the term. She replies that when friends and loved ones say it, the phrase is coming from a place of love and support.

‘Many people who have lost weight are proud of their achievement and want to spread the word and encourage other people to do the same,’ she explains. ‘Most of us who have tried to lose weight and failed know how hard it is and are genuinely keen to congratulate people where congratulations are due. I think we do get a lot of support from those around us, and it can help someone to hear it on a weight loss journey.’

Nevertheless, Dr Lee notes that weight loss can come from unintentional and upsetting reasons, and it is not advisable to comment on someone’s size without knowing the full context.

‘Weight loss can be a sign of illness – thyroid disease, depression, or cancer,’ she says. ‘It can be very gauche to wade in with weight loss comments if you know nothing about the person.

‘I wouldn’t mention weight to anyone I didn’t know well as it is such a sensitive issue – unless they brought the subject up.’

Activist Lindsay McGlone, aka The Fierce Fat Feminist, says we need to be more aware of the language we use when it comes to bodies, and that weight loss is not a common goal.

‘When you congratulate someone on their weight loss, you reinforce the idea that someone has to be seen as smaller to be seen as “good” or correct,’ she explains. ‘We have to remember that some people don’t wish to lose weight and that’s okay! We need to be mindful, so we don’t further marginalize larger bodies.

‘It’s taught to us that when we comment on someone’s weight loss that it’s considered a good thing, that it’s an achievement or progression, and okay, sometimes it is for that individual, but that isn’t the truth for everyone.’

It would be nonsensical to say that appearance isn’t valuable. In today’s world, it is a commodity of great power. Entire industries are built on the notion of looking and being better, and while some of this is positive, we must remember that not everyone is living the same life or experiences. The only way we keep things on par is to change how we think, act and speak.

Senior therapist Sally Baker reckons commenting on weight and looks is redundant, and we need to do better.

‘Well, it’s just such an old-fashioned knee-jerk reaction that we focus on how someone looks,’ she explains. ‘And we need to try harder.

‘Say better things, like “I love the way you style your hair these days” or “you look great in that colour coat”.

‘Or even better, comment on someone’s talent, ability, and personality and avoid any reference to their overall look.’

Having worked with patients dealing with eating disorders, Sally understands the power of language.

‘What people say to you is very powerful,’ she says. ‘So if someone has issues with food and eating disorders, whatever you say to them about their visual appearance, they’re going to decode that, and it’s going to trigger them.’

‘It’s even more important now when life is starting again, and you are seeing people after considerable time apart.

‘Please don’t fall into the instinctive reaction of commenting on their weight. Instead, minimise the obsession with the visual and look for authentic connections.

‘Always ask how someone is twice.’

For Naomi’s daughter, things are looking up, but as a mother, she urges people to take note of their words and change the narrative, not only for her child but for others too.

‘It’s so deeply ingrained in our society,’ she tells us. ‘I was always so conscious about not talking about weight or size around my kids, and still, my own daughter got that message from somewhere.

‘We need to compliment people on their hard work or kindness or talents, rather than on their looks, especially not their size.

‘Because that pressure and obsession with weight are things we may never lose if we don’t.’

If you suspect you, a family member or friend has an eating disorder, contact Beat on 0808 801 0677 or at [email protected], for information and advice on the best way to get appropriate treatment