In 1972, when Gough Whitlam delivered his campaign speech, he acknowledged his program was ambitious. “It has to be so,” he said, and “it should be so, because the backlog is so great.”

We have become accustomed to talking about 1972 as the quintessential “big target” campaign – but looking over Whitlam’s speech, full of detailed plans, this phrase sticks out. He had not conjured, out of nothing, imaginative policy visions. Instead, he was attending to a backlog. “It’s Time” was not just an assertion that the Coalition had lingered too long, but a statement that there were very specific problems that had for too long gone unaddressed. 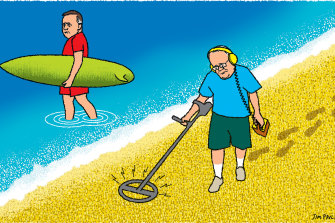 An interesting feature of recent commentary around next year’s election has been the emergence of 2007 as a common comparison. This makes sense: 2007 was the last time Labor won from opposition, with the party running against an old government. Kevin Rudd’s campaign speech that year was less detailed than Whitlam’s. But there are similarities. Whitlam’s first utterance was this: “The decision we will make for our country on 2 December is a choice between the past and the future.” Rudd, having welcomed his audience, began with this: “On November 24, Australians will face a stark choice: a choice between the future and the past.”

Boilerplate, perhaps. But what is striking now about Rudd’s speech is how closely it hewed to this theme, the idea that John Howard was stuck in the past while his younger opponent grasped the future. Cost-of-living pressures might not seem as though they easily fit the theme. But here was Rudd on the topic: “Financial pressures which Mr Howard no longer understands.”

This was not just a rhetorical trick. Twelve years in, there was plenty Howard had not done, either because he didn’t want to or didn’t feel he could. Each announcement Rudd made was something Howard had failed to do. Rudd had ideas, and some were large, even visionary. This is what we usually mean when we say a candidate presented a “big target”. But the other effect of Rudd’s big target was to suggest that he was, like Whitlam, working through a backlog. And this in turn meant that everything he announced said something not just about him, but also about his opponent.

So here is a simple question, the first of two: what is the backlog of policies that the Morrison government has failed to put in place? Most voters, I suspect, will not have a clear answer. That is because most voters – and especially swinging voters, the ones the parties desperately need – don’t go around obsessively cataloguing the failures of a government. They will be able to point to mistakes in the past – like vaccinations, like Hawaii – but this is not the same as something that needs to be done but hasn’t been done yet.

Here is the second question: if Labor is elected, what will the new Albanese government achieve in its first term?

The beauty of the two questions, of course, is that the answers to each should be the same. The way a smart opposition reminds voters of a government’s failures is to promise to address those failures itself. Six months (or fewer) out from an election, is there a single Labor policy you could state with any clarity? Perhaps you could say that Labor will do more on climate than the government. You might know it believes in an integrity commission and the Uluru Statement from the Heart. Something about childcare, maybe.

In recent weeks Anthony Albanese has begun saying the government, on climate, has “a vibe, but they don’t have a policy”. This is entirely fair; unfortunately, in most areas, it can be said of Labor too.

Hunting for comparisons with other elections is always fraught. The differences can easily trip you up. This may be even more true right now: we are living in extraordinary times.

Sometime next year, the construction of a futuristic-looking box, made of steel, 10-metres long, will be completed on a remote plain in Tasmania. “Earth’s Black Box” – like the black boxes installed with aeroplanes – will provide a record of what went wrong, should humanity vanish as a result of our failure to deal with climate change. The obvious take-out is that we need to act. But the sharper point is that we happen to be living at a very particular moment: we might be the people on earth at the last time we are in a position to do something. Also, we have barely begun to act: which means that we have no idea, really, what the next years will look like.

Here is another area we have barely begun to grapple with. Last week, we got news that Australia’s fertility rate had fallen to its lowest on record – a result partly of COVID-19, but also, it seems, of economic insecurity and anxiety about climate change. And another: the see-sawing between low and high inflation, the sense that the economy no longer runs in ways we understand.

It is possible, then, that 1972 and 2007 were more prosaic times: when problems could be described – and their solutions announced – in fairly simple terms. It might be possible to mount a case for small targets as a new, mature approach to a complex world, a refusal to make false and simplistic promises.

Mostly, though, it feels as if Labor simply hasn’t worked out what it wishes the Coalition government had spent the past eight years doing. And if it hasn’t figured that out, how will most voters?