The bullfighting saga gripping Spain’s most glamorous family: Sons of celebrated matador who was gored to death lock horns with their singer stepmother over father’s heirlooms she ‘falsely claimed were stolen’

Brothers from Spain’s most celebrated celebrated bullfighting dynasty whose matador father was gored to death are locked in a public feud with their stepmother over priceless family heirlooms.

Francisco Rivera Ordóñez, 46 and his brother Cayetano, 43, are fourth-generation bullfighters who married into aristocracy, mingle with celebrities and are as ‘popular in Spain as film stars and footballers’, explained AirMail’s Patrick Kidd.

In a case that has gripped Spain, the brothers have accused their stepmother Isabel Pantoja, 64, a famous singer and talent show judge, of withholding their inheritance, namely the capes, swords and traje de luces, or bullfighter’s ‘suit of lights’, used by their father in the ring. 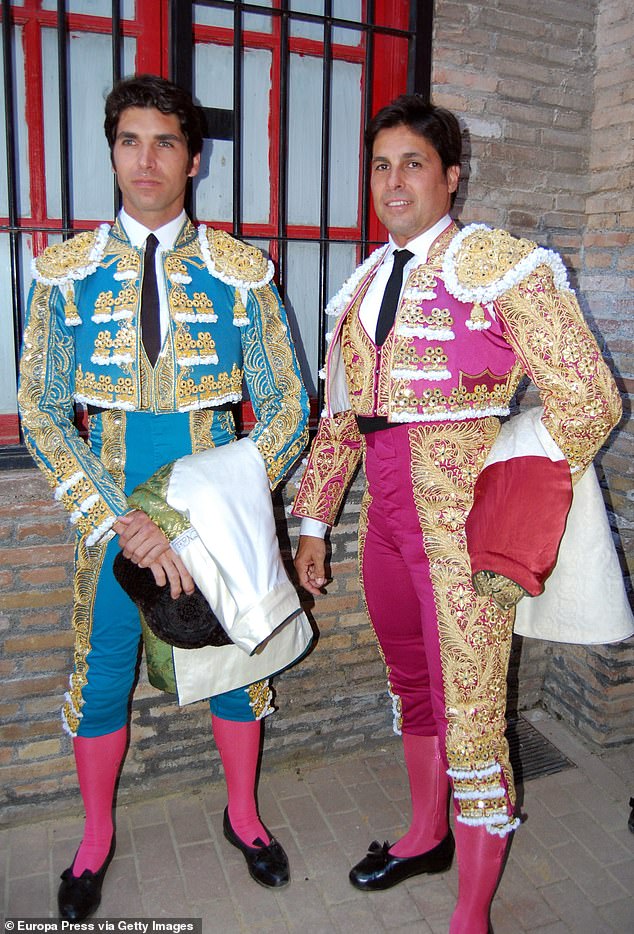 A-list names: Francisco Rivera Ordóñez, 46 and his brother Cayetano, 43, are fourth-generation bullfighters who married into aristocracy, mingle with celebrities and are as ‘popular in Spain as film stars and footballers’. Pictured, the brothers in 2016 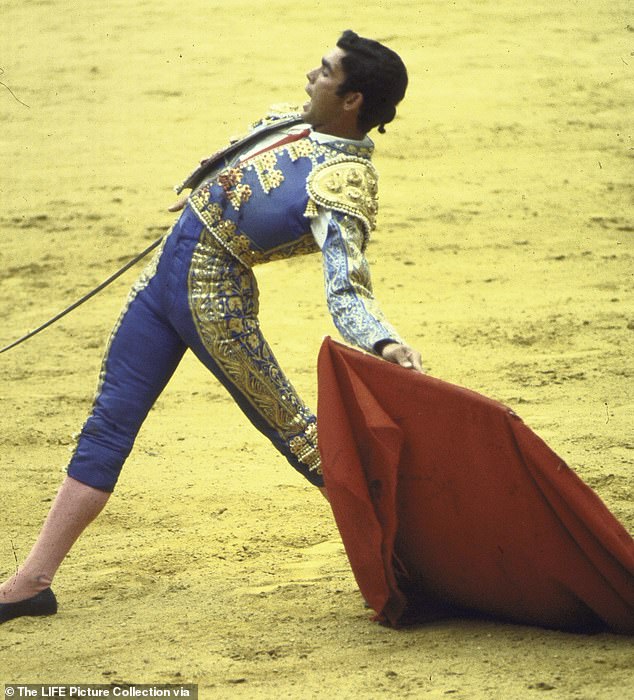 Legacy: They are the sons of celebrated matador Francisco Rivera, known by his nickname Paquirri, who was gored to death in 1984. Pictured, Paquirri in the ring in 1969

It is the latest chapter in a fascinating family history that dates back to the brothers’ great-grandfather, Cayetano Ordóñez, who started bullfighting at the age of 13 and inspired the young matador in Ernest Hemingway’s 1926 novel The Sun Also Rises.

His son Antonio was also friends with Hemingway. Photos show the pair dining with the then Maharaja and Maharani of India in Catalonia in 1960. Antonio was also close to Orson Welles, whose ashes were scattered on his Spanish estate.

The legacy continued through Antonio’s daughter Carmen, who married celebrated bullfighter Francisco Rivera Pérez, known by his nickname Paquirri, who was Spain’s leading matador in the 1970s.

With his movie star good looks and charm to match, Paquirri became a national star. 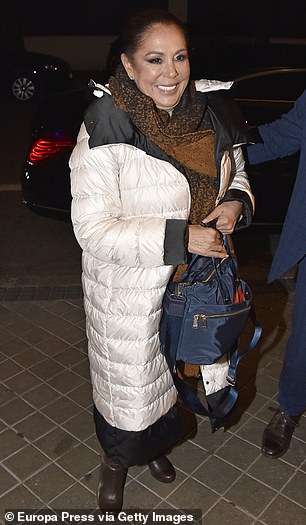 Feud: In a case that has gripped Spain, the brothers have accused their stepmother Isabel Pantoja, 64, a singer and talent show judge, pictured, of withholding heirlooms

After divorcing Carmen in 1979, Paquirri married singer Pantoja and had a son, Francisco José Rivera, known as ‘Kiko’. But their marriage was to be short-lived.

In September 1984, just a year after their wedding, Paquirri died after a bull pierced his thigh and tossed him into the air during one of the last fights of the season. He died in the ambulance on the way to hospital.

The loss shook the nation, partly because, despite the apparent risks, deaths in bullfighting are rare. The next fatal fight after Paquirri’s was in July last year, when award-winning matador Victor Barrio, 29, was impaled in horrific scenes broadcast on live TV and witnessed by his wife Raquel Sanz, 32, who was in the crowd.

Proud of their family tradition, Francisco and Cayetano, also became matadors and have enjoyed their own success and fame.

Their celebrity status and family pedigree mean the brothers mingle with the upper echelons of society, just as their father, grandfather and great-grandfather did during their lifetimes.

Photos show Cayetano, who has inherited his father’s piercing eyes, standing with his arm around Liz Hurley at a glitzy Formula E event, and hanging out with tennis ace Rafa Nadal. 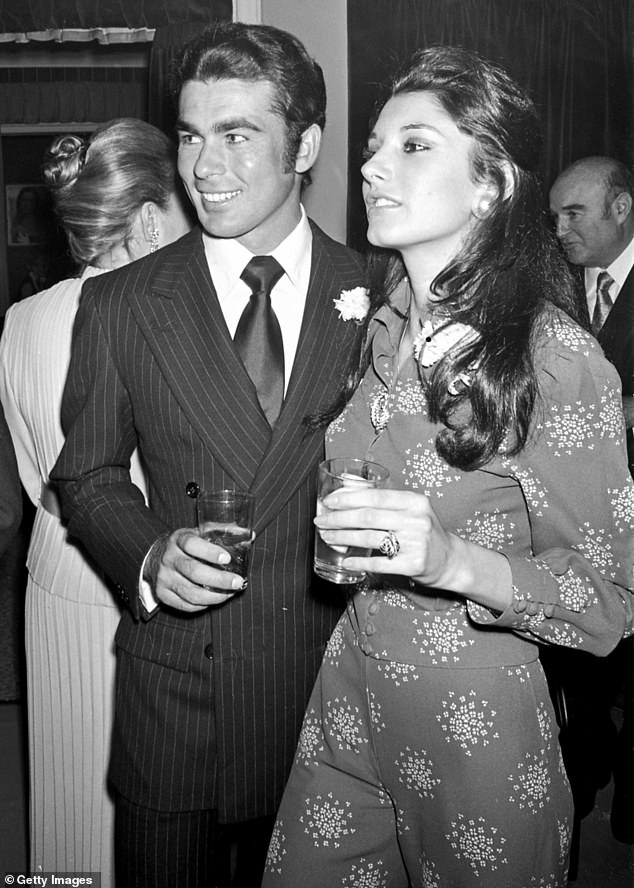 Dynasty: Francisco and Cayetano’s parents Paquirri and Carmen Ordonez, who was the daughter of bullfighter Antonio Ordóñez, who was friends with Orson Welles 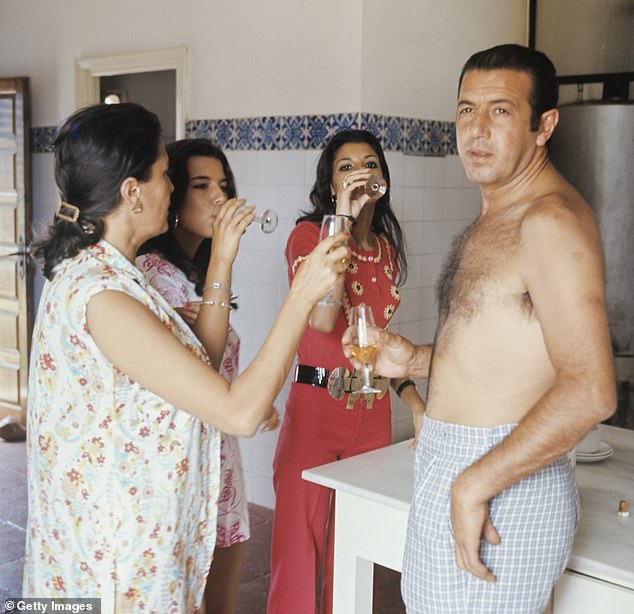 Grandfather: Francisco and Cayetano’s grandfather, bullfighter Antonio Ordóñez, with his wife and daughters in 1972. Antonio was the son of fabled bullfighter Cayetano Ordóñez 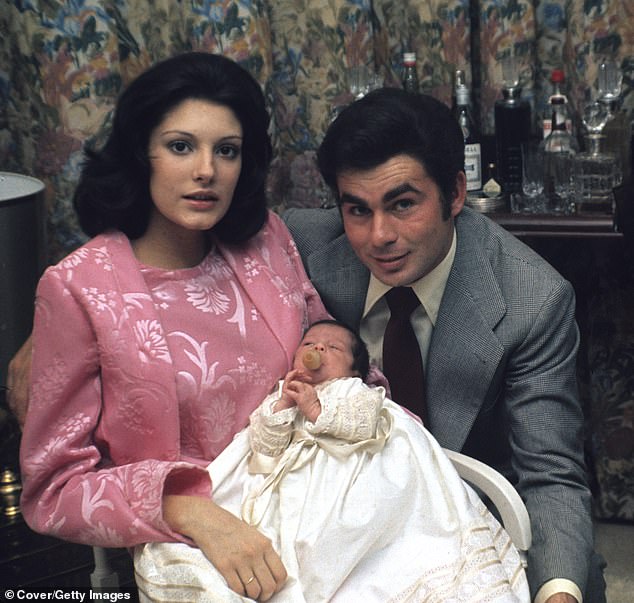 Young family: Paquirri and Carmen with their eldest son Francisco shortly after his birth

His first wife was actress and model Blanca Romero, with whom he has a daughter. He married his current wife, actress and TV personality Eva González, in 2015. The couple have a son.

Meanwhile Francisco was married to Eugenia Martínez de Irujo, 12th Duchess of Montoro, who is six years his senior. Eugenia is a member of the Spanish aristocracy and is granddaughter of the late Duchess of Alba, who was dubbed Spain’s richest woman. In 2013 he married his current wife, lawyer Lourdes Montes.

While wrangling over their father’s will in the 1990s, the brothers had asked Pantoja to give them the heirlooms bequeathed to them, including their father’s matador armour, capes and medals. At the time she told the court they had been stolen. 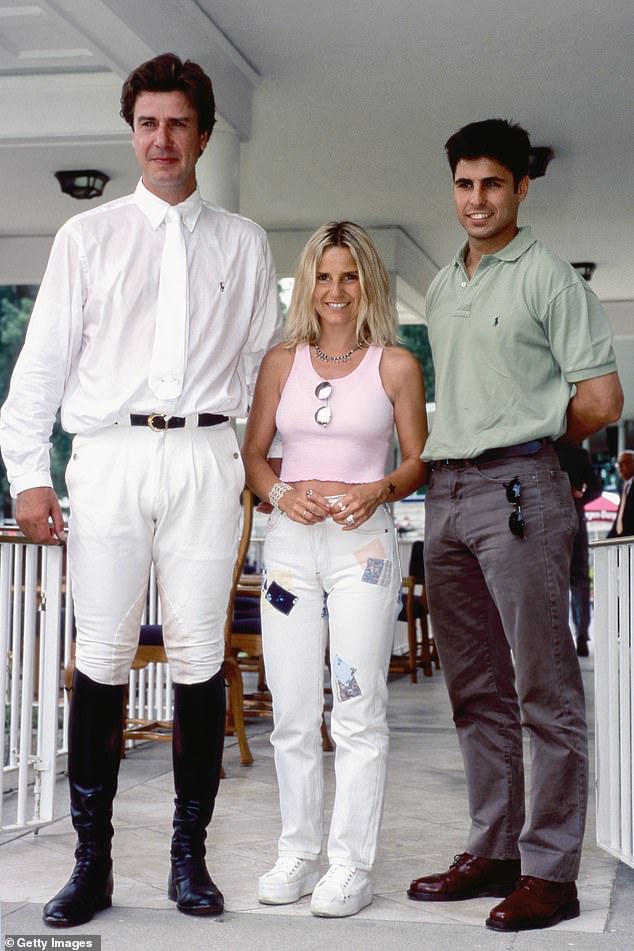 Aristocratic marriage: Francisco was married to Eugenia Martínez de Irujo, 12th Duchess of Montoro, who is six years his senior. Eugenia is a member of the Spanish aristocracy and is granddaughter of the late Duchess of Alba, who was dubbed Spain’s richest woman. Pictured, Francisco and Eugenia with her brother Cayetano, 4th Duke of Arjona, in Madrid in 1999 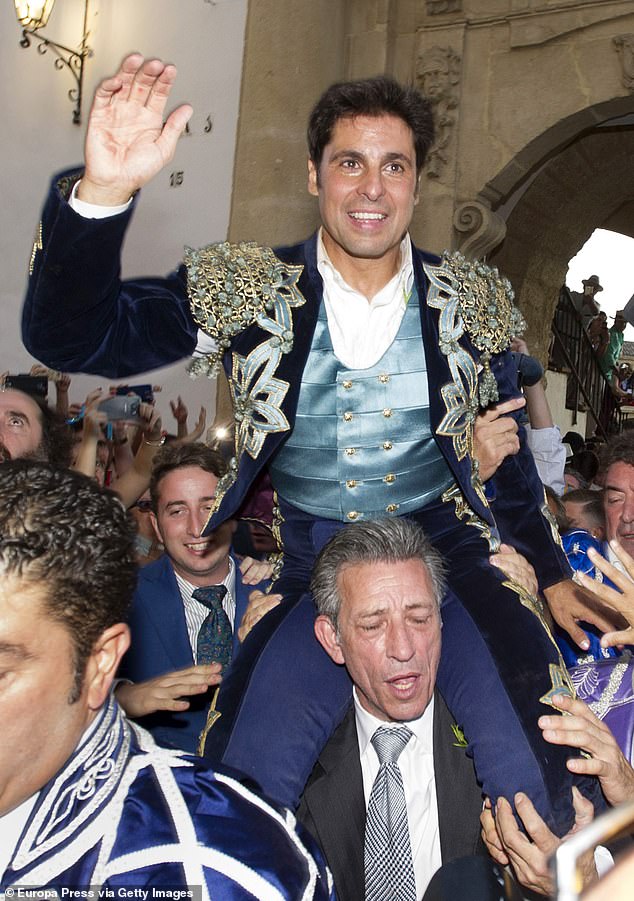 Success: Francisco is carried on shoulders at the Goyesca 2017 bullfights in Ronda 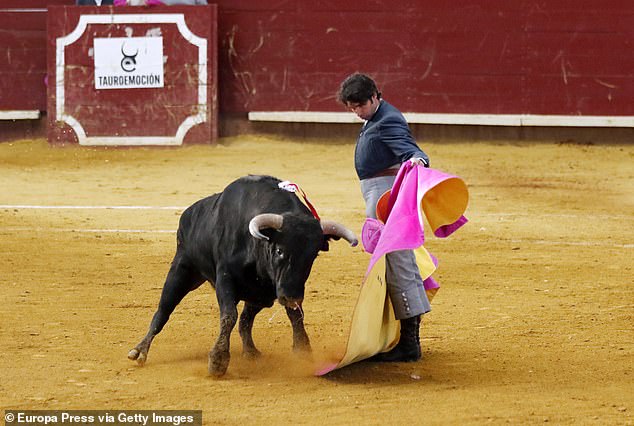 In the ring: Cayetano at a bullfight in Valladolid, Spain, in February this year

However this summer the case took a turn when Paquirri and Pantoja’s son Francisco José Rivera, known as ‘Kiko’, discovered his half-brother’s inheritance at his mother’s country estate.

Kiko said he found piles of items, including swords and the traje de luces, or bullfighter’s ‘suit of lights’, in a room that is normally kept locked and quickly sided with his half-brothers, saying he had also been deceived by his mother.

In late November Francisco and Cayetano issued a legal notice to Pantoja, demanding that she hand over the trove.

Pantoja refused her stepsons’ request, saying that they were left to her. In response, the brothers, who have the support of Kiko, said they would give her the festive season to consider her next move, but show no signs of backing down.

This week their lawyer appeared on a Spanish TV show to say the brothers are preparing to take legal action against Pantoja and will not stop until the items are recovered. 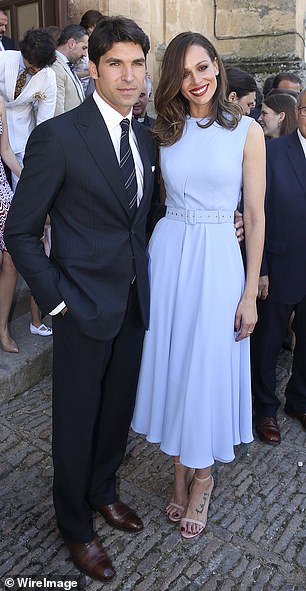 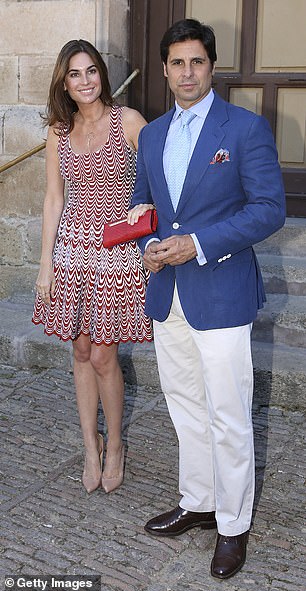 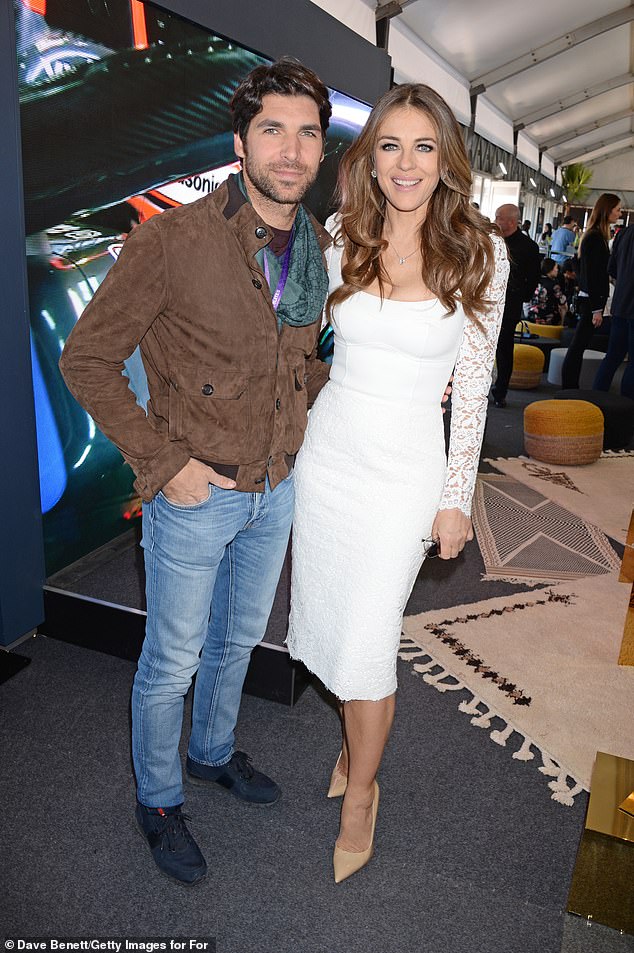 A-list events: Catetano poses for a photo with Liz Hurley at a Formula E event in January 2019