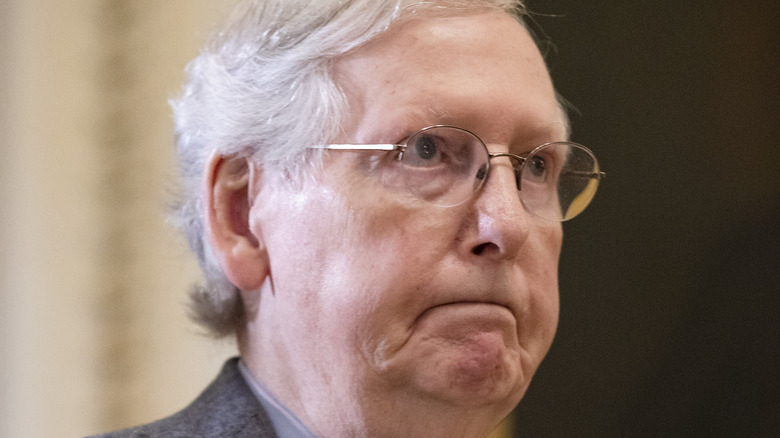 It was, at least to political watchers, a marriage of convenience between a Washington veteran and a New York businessman. And while Mitch McConnell was never a fan of Donald Trump’s, the senate majority leader made his relationship with the then-president work — so much so that ProPublica says the former president owes both his election and White House scorecard to the senator who has served seven terms for the state of Kentucky (via The New York Times).

ProPublica credits McConnell for pushing reluctant Republicans to vote for Donald Trump with the promise that they would be able to fill the court with conservative justices. In that he succeeded, because Trump not only filled the vacancy created with the death of Antonin Scalia, he also nominated and passed justices to replace Anthony Kennedy and later,  Ruth Bader Ginsburg (who died close to the end of Trump’s term), with Neil Gorsuch, Brett Kavanagh, and Amy Coney Barrett, per Pew Research. In return for his support, Trump brought McConnell’s wife Elaine Chao into his cabinet as Transportation secretary, per Politico.

David Andersen, an academic who studies U.S. Politics at Durham University, says he believes that the relationship between both men is mutually beneficial. He tells Newsweek that “For four years Trump stayed in the spotlight and McConnell governed. Trump took the credit and McConnell took pride in accomplishment. McConnell provided the opportunity for Trump to brag about accomplishing things, without Trump actually having to be the force behind those actions.”

Trump and McConnell's partnership ended with the January 6 riots 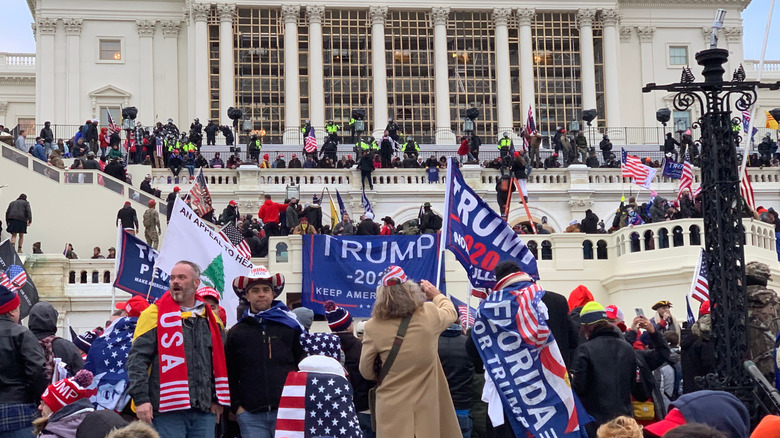 But the union between Trump and McConnell ended on January 6, 2021 when Trump supporters laid seige to the U.S. Capitol to try and force an end to the ceremonial count that would see Joe Biden declared the victor of the November 2020 elections. Immediately after the event, McConnell had strong words for the former president, who he accused of spreading lies about the election. And while, as The New York Times pointed out, Republican lawmakers were as much the victim of the attack as Democratic lawmakers, McConnell and his GOP partymates — with the exception of a few — may still see Trump as the key to winning the 2022 midterms; as such, few are willing to cross the former president at this juncture, per The Washington Post.

Democrats like Senator Richard Blumenthal have said the GOP’s unwillingness to hold Trump accountable for the insurrection is not just a statement against Trump, but against the GOP as a whole. “As strong as the indictment of Donald Trump, it is also an indictment of Republicans. Neither has been convicted in a legal sense, but in a moral and political sense they have. How they can try to walk away and look the other way is beyond me,” Blumenthal told The New York Times.

Trump and McConnell have a common goal: Senator John Thune 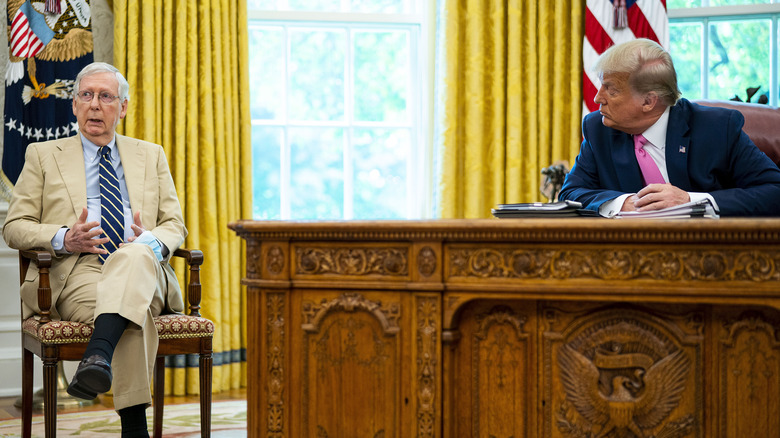 With their relationship in tatters, the former president appears to no longer feel the need to hold back, and he’s decided to tell the world what he really thinks of Mitch McConnell, at times calling him “a dumb son of a b****,” and a “stone cold loser”; this, even if McConnell has already said he would back Trump if he were to become the GOP’s presidential nominee in 2024 (via NBC). Most recently, Trump called McConnell an “old crow”, which the Senate minority leader took with a grain of salt (via CNN). Trump has even called on his fellow partymembers to throw McConnell out, calling him an “unsmiling political hack back” in February, although McConnell doesn’t appear inclined to respond to these insults, at least in public.

So is the gap between the former president and the Senate minority leader too big to bridge? GOP Senator John Thune doesn’t think so. Thune dismisses the bombast and the rhetoric as Trump’s style, saying, “I think he and Mitch McConnell have a common goal. And that is getting the majority back in 2022, and hopefully in the end that will be the thing that unites us.”