Indigenous activist Celeste Liddle will attempt to unseat Labor MP Ged Kearney at the next federal election as the Greens candidate for the inner-Melbourne seat of Cooper.

Ms Liddle, an Arrernte woman who is a union organiser and a social commentator, will become a key figure in the Greens’ strategy to help Labor form a minority government and demand greater action on climate change and inequality. 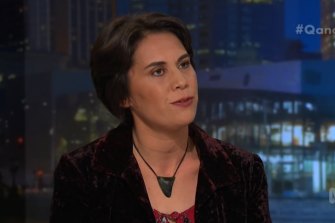 Greens candidate Celeste Liddle will attempt to snatch the Melbourne seat of Cooper of Labor.Credit:ABC

The National Aboriginal and Torres Strait Islander organiser for the National Tertiary Education Union, Ms Liddle said both major parties had devastated the sector through continuous cuts and the Coalition government seemed to be content to “let it die completely”.

“I believe universities must be properly funded, casualisation in the sector must be stemmed and higher education should be free for all,” Ms Liddle said.

“Cooper is a very progressive seat. It’s a highly multicultural seat. It’s a seat with a sizeable
population of Indigenous people. It’s a seat that values the right to health care, free education,
asylum and a sustainable future. I believe through the crossbench, we have a better
opportunity to represent these key community values and hold the majors accountable.”

Ms Liddle rose to prominence through her personal blog, Black Feminist Ranter, and in 2017 was added to the Victorian Honour Roll of Women.

Greens leader Adam Bandt has named nine seats the party will target in a bid to gain the balance of power at the new election, calculating this is far more likely than an outright Labor victory on polling.

The plan is based on an electoral analysis that shows a uniform swing of 0.6 per cent against the Coalition would be enough to create a hung Parliament and a chance for Labor to form a minority government with the Greens.

The Greens polled 21 per cent of the primary vote in Cooper, formerly the seat of Batman, at the last election. Held by Labor since 1934, it was not among Mr Bandt’s target seats held by Labor including Griffith in Queensland, Richmond in NSW, Canberra in the ACT and Macnamara and Wills in Victoria. The party threw everything at the seat at a 2018 byelection following the resignation of Labor MP David Feeney amid the citizenship chaos that swept parliament and polled 39.49 per cent of the primary vote behind Ms Kearney’s 43.14 per cent.

The other four target seats are held by the Liberals: Brisbane and Ryan in Queensland and Kooyong and Higgins in Victoria.

If successful, Ms Liddle would be the first Indigenous Australian woman to be elected to the House of Representatives from Victoria.

Mr Bandt said Ms Liddle was a fierce advocate for working people and he was thrilled her years of community activism and campaigning would now be channelled towards fighting for a seat in Federal Parliament.

“Putting Celeste Liddle into Parliament would be a tremendous victory for working people across the country,” Mr Bandt said.

“This week’s billionaires’ budget has shown Australia that the Liberals don’t care about working people. Billionaires get tax cuts and big corporations get handouts, but wages go backwards and job seekers are stuck in poverty.

“Luckily, there’s more of us than there are of them. Celeste’s history shows that when you organise working people, you get results, and by uniting Australians in opposition to the billionaires, we can end their toxic legacy on our politics.”