She was as improbable as a hummingbird, a creature that beats its wings 80 times a second, while its tiny heart pounds 1,260 times every minute. They have short lives. The wonder with Mexican artist Frida Kahlo (1907-1954) was not just her revolutionary art, nor that she was dead at 47, but that she painted at all and survived so long, given the last 30 years of her life were physical torture. 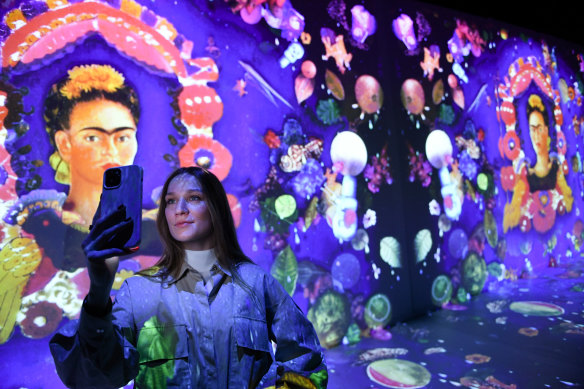 “She lived beyond her possibilities,” says Jordi Sellas, artistic director of Barcelona’s digital arts company Layers of Reality, which, in conjunction with Mexico’s Frida Kahlo Corporation, has produced Frida Kahlo: Life of an Icon, a Sydney Festival exhibition using the cutting edge of audiovisual technology. The hummingbird, the exhibition’s leitmotif, was revered in ancient Mexican culture, with a dead one worn as a charm, as in Kahlo’s Self-Portrait with Thorn Necklace and Hummingbird (1940), believed to restore lost love – and Frida needed her broken heart repaired as often as her mangled bones. 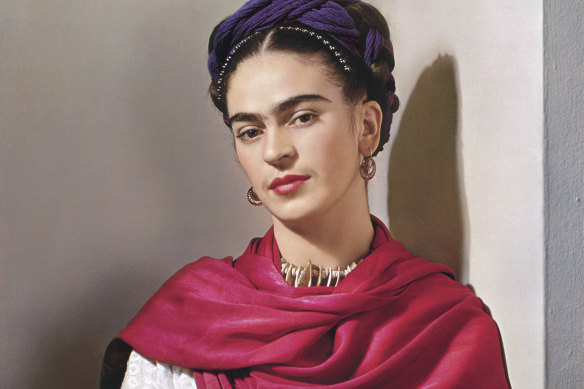 Rendered lame by polio at six, at 17 she was intending to become a doctor when a tram slammed into the bus in which she was travelling, and a handrail skewered her pelvis. Two years of operations and insufferable corsets followed. To distract her from the pain, the heartbreak of learning she couldn’t bear a child, and to relieve the boredom of convalescence, she took up painting, feeling compelled to externalise her inner life. This would later account for her many self-portraits.

Kahlo brazenly sought out Mexico’s most famous artist, Diego Rivera, to appraise her work. At the insistent summons of this teenaged girl, the corpulent Rivera had to clamber down the scaffolding for the giant mural he was painting. Impressed, he encouraged her to continue. Four years later they began a stormy marriage, in which, whatever minefields of infidelity (including Rivera with Frida’s sister) were navigated, they remained each other’s key supporter emotionally, politically (both being ardent communists) and artistically. Rivera routinely rated his wife’s work above his own feted accomplishments – and this in such a sexist society that Kahlo had been one of only 35 girls among 2,000 boys at school. 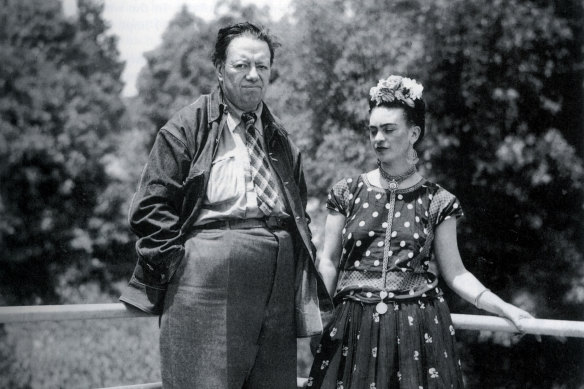 Diego Rivera and Kahlo had a stormy marriage marked by infidelity on both sides.Credit:

As well as fusing her exterior and interior worlds, her paintings drew on Mexico’s traditional cultural emphasis on magic, ritual and fertility, with My Nurse and I depicting indigenous culture nurturing her art. Often her work has a confronting emotional candour: in The Broken Column, for example, her spine is a crumbling Ionic column, her face is stained with tears, and her body pierced with nails. Taboo-breaking portrayals of birth, miscarriage, abortion and sadistic murder juxtaposed gruesome imagery with a naive style.

Kahlo’s photographer father was German, her mother Mexican, and a duality was always in play which, Sellas says, steered her towards a “more universal kind of work”. The Two Fridas was her most overt expression of this dichotomous identity: European Frida in prim white dress and Mexican Frida in a vibrant Tehuana costume. Her paintings are also laden with symbolism. The pet monkeys – part of her personal menagerie of a fawn, a turtle, a chipmunk, dogs, cats and birds – adorning several self-portraits, for instance, carried a plurality of meanings in indigenous culture: cleverness, fertility and instability.

The surrealists claimed her as their own, but, while she was happy to participate in their exhibitions to expose her work, she denied being one of them, saying they painted what they dreamed; she painted what she saw. She did, however, bequeath them a more engaging definition than their pedantic leader, Andre Breton, ever managed: “Surrealism is the magical surprise of finding a lion in a wardrobe where one is sure of finding shirts.”

Like Dali, her public persona was a conscious extension of her art, although in her case the ostentatious clothing and jewellery disguised her debilities. Despite these, she was renowned for her (often uncensored) wit, as when she met automotive magnate Henry Ford, a renowned anti-Semite, and asked, “Mr Ford, are you Jewish?” 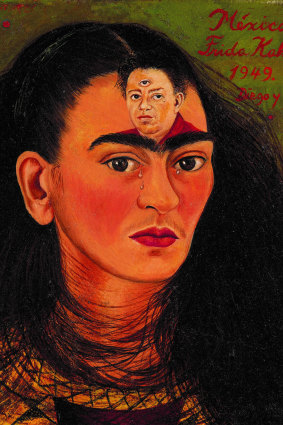 The writer Carlos Fuentes memorably described her as “a broken Cleopatra”, and she savoured her ability to attract lovers of both sexes. Although Rivera didn’t mind the female ones, he hated the men, among whom was Leon Trotsky, on the run from Stalin. Art dealer Julian Levy saw her as a “mythical creature, not of this world”, and one myth she fostered was being born in 1910 rather than 1907, not just to be younger, but to be born when the Mexican Revolution began.

Layers of Reality’s “immersive biography” of Kahlo incorporates virtual reality, holography and artificial intelligence, with one of the installations, The Accident, being a multi-layer holograph of that critical incident. “You’ll see a big Frida porcelain sculpture that breaks into dozens and dozens of pieces,” explains Sellas, “and then returns to be the same sculpture because she’s Frida again, but she’s not quite the same sculpture as before.”

Another installation has Kahlo in a hospital bed, surrounded by what Sellas calls “a fluid approach to all the things that gave her pain, but also made her tougher”, shaping her as a person and artist. A third is Endless Symbology: an intimate room with mirrors, projections and interactive floors, where one engages with the main symbols of Kahlo’s work.

Her life was not all sadness and suffering, of course, and the biggest room – which in Sydney will be the biggest they’ve built anywhere – is dedicated to her profound capacity for joy, and living every day as if it were her last. “Her life,” says Sellas, “was more intense than any person I know.”

The exhibition also incorporates sonnets by the 18th-century Mexican nun Sor Juana Ines de la Cruz, a towering intellect, writer, proto-feminist and, Sellas thinks, a closet lesbian. “Frida was a great fan of hers,” he says. “They are like the two big women of Mexican culture. You realise that her words could have been written by Frida, and this is what’s really strong for us: to try to connect culture and heritage in a way that can traverse centuries… It’s really meaningful to find there’s a fine thread pulling together these different arts because they are an evolution of the same thing.”

Another room represents a bar serving the traditional alcoholic drink, pulque. In such a place Frida and her teenaged students painted a fresco, and there people can create their own paintings, which are scanned to become part of the fresco on the walls. For the finale, visitors don high-resolution virtual-reality headsets to actually go inside Kahlo’s paintings and experience what Sellas calls “the explosion of colours”.

He hopes the exhibition will encourage visitors to delve deeper into Kahlo’s life and work, and there’s much to probe in terms of imaginative power, pain, humour, beauty and resilience. “I am broken,” she once said, “but I am happy to be alive as long as I can paint.” Of her death she observed, “I hope the exit is joyful. I hope I never return.”

Frida Kahlo: The Life of an Icon, The Cutaway, Barangaroo, from January 4.