Uncle Jack Charles wasn’t even told he was Aboriginal.

The actor and Indigenous rights activist on Tuesday told the nation’s first truth and justice commission to hear the impacts of colonisation and racist government policy on First Nations people of his removal from his family as a baby. 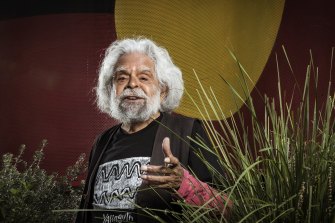 Charles said he was placed in the Box Hill Boys’ Home, where he experienced “cruel and callous punishments” in the 1950s, and spoke of the cycles of incarceration, homelessness, familial dislocation and drug addiction he experienced for decades as a result of that treatment.

“I wasn’t even told I was Aboriginal. I had to discover that for myself. I knew nothing, was told nothing, and had to assimilate … I was whitewashed by the system,” Charles told the Yoorrook Justice Commission on its first day of public hearings.

Elders were invited to make submissions at the commission’s hearings, or wurrek tyerrang, that opened at the former site of the Victorian Aboriginal Health Service building on Gertrude Street in Fitzroy, a symbolic landmark of self-determination to First Peoples in the state since the community organisation was founded in the early 1970s.

Submissions to the commission, also referred to as nuther-mooyoop (a Boon Wurrung word for truth), were designed to provide an opportunity for First Nations elders in the state to share their experiences of the impacts of colonisation, including their experiences of resilience and survival of languages and little-known histories and traditions.

Nuther-mooyoop made to Yoorrook may take the form of writing, artwork, cultural artefact, photo, performance, or audio and video recording.

Yoorrook commission chair Eleanor Bourke said “all ways of telling the truth are of equal importance. A nuther-mooyoop can include anything about a past or current experiences of systemic injustice for an elder, in addition to that of their family or community”.

Bourke assured elders intending to make submissions that their stories would be protected and that the process would be conducted in a culturally safe way.

The initial period of the wurrek tyerrang process will run until May 6 at the Fitzroy site, with a second round of sittings commencing later in May.

The commission will open the hearings to all First Nation people and other Victorians later in the year.

The hearings will culminate in the publication of Yoorrook’s interim report in June 2022 and is considered a crucial component on the path towards achieving an historic treaty with Indigenous residents of Victoria.