Schoolies? Think the Gold Coast and Byron Bay. No, think again. Our plane tickets said “New Delhi” – no need to pack the bikini or the budgie-smugglers. Having fallen in love with India on my first visit in 1984 – the first of many since – I was taking Anna, my daughter, there to celebrate her completion of high school. I aimed to mark this key moment in her life with something significant, to share my love of an astonishing culture with her, and expand the frame she looked at life through by showing her another way of being in the world.

I was doing something that Schoolies doesn’t: trying to prepare an 18-year-old for the independent life that awaited her. Sure, Schoolies has a place: it’s nice to celebrate an achievement like finishing high school – after all, it’s a long time coming – but it’s limited. And let’s not kid ourselves Schoolies has anything to do with a rite of passage. It looks back, not forward. We don’t have a coming-of-age rite of passage. You learn how to drive a car but not how to drive your life. 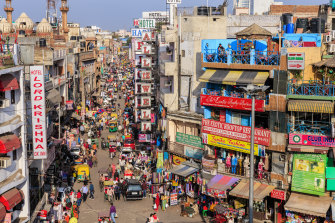 Schoolies a rite of passage? Not quite. Credit:iStock

Many struggle with this crucial transition. I did. When I finished school in Cairns in 1979, I went to stay with my dad in Newcastle, NSW. He’d left us when I was eight, and I hadn’t seen much of him since. In 1979 he was running a pub – the family business – and there were rooms upstairs. I was on my way to uni in Sydney … let’s just say that summer with him was not a very rewarding experience.

It wasn’t easy navigating the larger world as an awkward, introverted late teen. Then, at the end of First Year, my girlfriend dumped me. That was my first tough time as a young adult, and I crumbled. Resilience? Not exactly my middle name. Anna is also an introvert (we share a lot) and I anticipated her struggling too. I wanted her to be better equipped than I was.

Anna wasn’t into the schoolyard nonsense – the cliques, the social exclusion. She was never the queen bee, more of a native bee: having her being, doing her thing, no sting in the tail, just bringing life and joy to the world. Even so, she had her share of struggles in the childhood and teen years. I wrote about some of them. Seeing her suffer tore me apart. I wrote about that too. As Anna herself said, she didn’t need more sensitivity, she needed to toughen up a bit. OK, message received. I would do my bit to help build her inner strength, emotional and psychological.

So, off we went … And Day 1, we swam out to the deepest water I know of, so to speak: labyrinthine Old Delhi, heaving, teeming, pulsating with more activity and vitality than one place seems capable of. Such is the sensory overload, you don’t know what to look at, what to think or feel because you’ve never experienced anything of this order before. This is another reality – you see real struggle here, every cruelty, every tenderness. Moments like this expanded Anna’s life frame; two months in India consolidated that expansion.

She was no longer a child, but our surroundings forced her back into a more dependent role with me. That would frustrate any young person. Anna accepted it, mostly, though now and then she champed at the bit, as anyone in her place would – and should, really. My job was to keep her safe and let her champ, but not too much. She did, once, one night on a dusty street with bad lighting, lots of trucks and few pedestrians. Impatient with my slow pace, she walked ahead in the darkness. Something happened, and she stayed close after that.

Anna embodies life’s preciousness to me, as India does life’s wonder. She’s a part of me, a part of her mother, my life partner. Her body – which we nurtured, protected, fed and raised – is her temple. The idea of some guy, Indian or otherwise, getting his jollies by laying his hands on her without her consent is simply unsupportable. Such an assault could erode her sense of her own rights, her dignity, her body, her general level of ease with those around her. It may take only a few seconds, but the fallout could be life-long.

A Guardian poll found India to be the most dangerous country in the world for women. (When I read that article, I wept.) But we shouldn’t point the finger. Australia, like many nations, wages institutional and often personal war on women. I mentioned 1979 – read the news: it feels like very little has improved in these 40-plus years.

Resilience – that inner strength I wanted for Anna – is about bending so you don’t break. Having it doesn’t mean your life’s a breeze; it means when the breeze turns to a whipping gale, tossing you this way and that, you don’t flounder on the rocks, you ride the crests and troughs until calm returns and you can go on.

During some recent book-promotion events, Anna said many things about our trip – including that it made her strong. When I heard that, I wanted to weep with joy! I shared what I loved, and the process did indeed toughen her up.

Anna met India, and they’re both the better for it.

Sean Doyle is the author of Night Train to Varanasi: India with my daughter, published by Bad Apple Press.