In the months after eight people were killed, including six Asian women, in shootings at Atlanta-area spas, CBS News spoke with three women working in the city’s massage district. The women, who spoke on the condition that we don’t use their real names, detailed how their lives and businesses have changed since the massacre that shocked the community.

“Usually, this is a busy time,” said Sophia, pointing to the empty leather massage chairs in the darkened main room. But it was 5 p.m. in Atlanta and Sophia, a 50-something spa owner, only had one customer. Before the coronavirus pandemic, there were 20 to 40 customers each day at her spa. There used to be six workers, but two remain. With most businesses in the city fully reopened, Sophia worries the massacre has scared customers from returning.

I met Sophia on a Tuesday in April, about a month after the deadly shootings. A Mandarin interpreter and I were driving around the Cheshire Bridge Road area of Atlanta, where four of the eight murders occurred at two spas, to find out how the Asian massage community was coping.

The Cheshire Bridge Road area is home to about 20 massage parlors, most staffed by Asian men and women. The area is dotted with massage parlors, sex-toy stores, liquor stores, and strip clubs. Yet it’s gentrifying: an organic supermarket opened a few years ago, blocks from the massage parlors, and a hipster burger joint and upscale Mexican restaurant are recent additions. The two area businesses targeted in the massacre, Aromatherapy Spa and Gold Massage Spa, have remained closed since the massacre. The third, Young’s Asian Massage Parlor, which is located several miles north, is also closed.

Sophia’s parlor was the third I’d visited. The first seemed empty, and at the second, the masseuse declined to speak to me.

Sophia, a single mom to a young daughter, said she immigrated to the U.S. from a town in north China in the 2000s and is now an American citizen. She said one of her employees was previously employed at Young’s spa in Acworth, where four people were killed.  “She had given [the shooter] a massage before,” Sophia said. (The Cherokee County Sheriff’s Department declined to comment on this, citing the ongoing investigation.) Sophia said the worker was shaking so much after the shooting that she couldn’t drive home. “I asked her to stay and help me run the business, but she said, ‘I want to live. I don’t want to die,'” she said. The worker left Atlanta and moved to Los Angeles.

Sophia said she desperately needs customers but admitted she’s also afraid of them. “I can’t do this every day and be scared 24-hours. It makes me crazy,” she said.  “I have to open to pay the rent, but I don’t want to open,” she said. Some of her customers are afraid as well, she said. They’ve asked her to lock the door while she gives them a massage, but Sophia refuses because she’s afraid for her own safety. She said her business does not offer sexual services. Her rent and overhead amount to about $4,000 a month. She wants to shutter the business, but she doesn’t want to break the lease.

Sophia pointed to her friend Lisa, a woman who recently quit her job at another parlor. She said Lisa saw Xiaojie Tan of Young’s Massage a day before she was murdered. Lisa said Tan was very nice and a “super hard-working” single mom. She claimed Tan gave a 90-minute massage to the accused gunman, Robert Aaron Long, before he allegedly killed her. (The Cherokee County Sheriff’s Department did not respond to requests to confirm this account. Several days after the shooting, the department released stills from surveillance footage showing the suspect leaving the spa). Long took responsibility for the shootings, police said, and previously told investigators he targeted the spas because he considered them a temptation he “wanted to eliminate.”

Long pleaded guilty to four murders in Cherokee County, which includes Tan’s death. He’s now expected to face charges in Fulton County, where the four others were killed.

Sophia plans to stay in the area because her daughter loves her school. She believes her daughter, who is biracial, will be safer because she passes as White. Yet Sophia doesn’t see her daughter as much as she would like because she never takes a day off. In what little downtime she has, Sophia remains afraid of being in public. “I don’t go anywhere. Work. Home. That’s it,” she said. 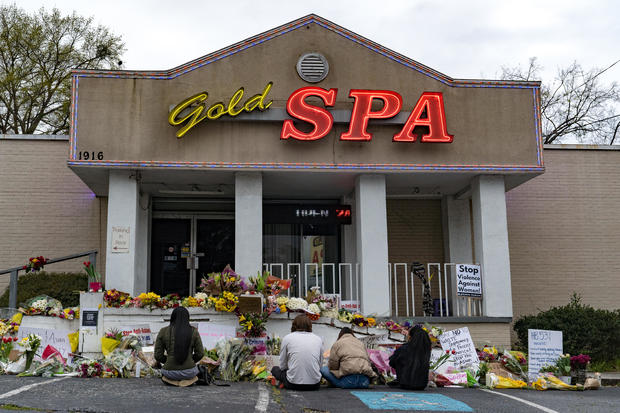 In a suburban spa about 40 minutes northeast of the Cheshire Bridge Road area, I met Anna at the massage parlor she owns. Anna, who is 31, bubbly and warm, greeted me in her Donald Duck crop T-shirt and sweatpants at the front desk of the empty parlor. She also said her spa does not provide sexual services.

Anna was born in China and moved to the U.S. with her parents when she was 15.  After graduating from high school, she worked in restaurants because most of her family works in the food industry. Anna became tired of working long hours and smelling like food, and a friend suggested she get a job in the massage industry where she could make more money.

On March 16, Anna was working at the parlor by herself when she said a friend texted her about the shootings. “I was so freaked out, so I closed early,” she said. She went home, where she lives with her family, and texted her friends in the industry to warn them.

In a WeChat group message, she said the surviving Young’s spa employees discussed the terror they experienced. “They are hiding behind the door, and there was blood everywhere,” Anna said they wrote in the chat. “They couldn’t speak after the killer was gone. They were so terrified.”

Anna and her employee were also frightened when they arrived to work the next day. “We’re really scared of the [customers] we don’t know, especially the younger clients. Usually, older people are more stable. They have family,” she said.

As of July, Anna said business is still “slower than before” the shooting because customers remain afraid. Sometimes she only gets two customers each day. She hasn’t hired any additional security or bought a gun. At Sophia’s, a woman working at the spa said business was still slow, which she blamed on COVID and the shootings.

When customers don’t pay (which she says is not uncommon), Anna, like Sophia, doesn’t call the cops. Anna is unsure why some customers refuse to pay but said they often complain that workers “didn’t meet their demand or they weren’t satisfied.”

“The Chinese never call the police because of the language thing and because they get scared,” she said. “In China, police don’t carry a gun. In America, police carry many guns.” She believes most cops here are racist and recalled an encounter with police when she was 15 and new to the country. Her father had to pick her up from the restaurant where she worked. He arrived straight from his own restaurant job with a sweet potato wrapped in paper that he’d brought for her. “[The police] thought this [sweet potato] was a drug or something, and they used the gun to point at him. I was so scared. At that time, I cannot speak English, my Dad cannot speak English, so I cannot describe what [the sweet potato] is.”

Anna said her customers are mostly White men, although she also gets some White women and Indian men. A sign in the store read, “Please do not disrespect our workers by touching or asking for any type of inappropriate or illegal act.”

I asked Anna if she’d experienced racism at the spa. “I’ve had some clients ask me, ‘Did someone bring me here?’ They think my boss is a human trafficker,” she said, laughing. “I said, ‘No, I’m a U.S. citizen. My family are here.” She believes the assumption that Asian massage workers are trafficked is rooted in racism. “All the people I know [I worked everywhere] nobody said [they were] trafficked. They’re totally free. They can leave anytime they want.” 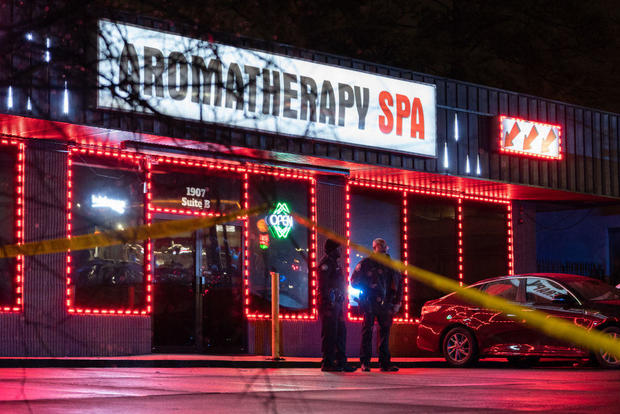 While employees at the spas we visited insisted sexual services are not provided, they are available in other spas, often in deals made directly between clients and masseuses inside the massage room. Some massage parlor owners and workers I’ve spoken to in the past have said customers pay a “house” fee upfront (sometimes with a credit card), and while getting a massage in the room, the masseuse negotiates for more sexual services and explains what the fees are, they said. The business owners usually aren’t aware of the sexual services within each individual session, they said, but most are aware that something sexual is going on but they don’t know any details and they don’t want to know.

Whether massage parlors provide sexual services or not, there is fear of the police among workers. Esther Kao, co-director of Red Canary Song, an Asian and migrant sex worker group, said massage workers’ fear of arrest “almost always supersedes fear of robbery or assault.” Kao said the fears of calling the police are often associated with immigration status but said an arrest could disrupt their livelihoods beyond immigration. “Generally, being arrested is deeply traumatic and the police often confiscate their savings and belongings in the process.”

When I asked Anna what the public could do to help massage workers, she said they could start by understanding that, “We are human.”

Red Canary Song has supported massage workers by sending volunteers to get massages in Chinatown and having them give generous tips as a form of mutual aid. When I spoke to clients, they said they were doing something similar. “Patronizing these establishments right now should go on, because these folks depend on it for their livelihood,” a client, Dan, said.  “Calls to shut down parlors because of [the shooting] are misguided. I recall a mass shooting at a FedEx once and I didn’t hear anybody saying we should close down all FedEx locations.”

While most clients said they’ve started going to parlors again, not everyone feels so comfortable. “I don’t think I will ever go back to a spa since the shootings. The thought of being trapped in that situation is awful. Plus I can’t imagine if my family or friends were to hear the news that I was killed in an Asian spa,” said Rob, a client.  The stigma that affects women working in massage parlors, affects clients as well. Clients think they are unfairly represented as objectifying women. “The vast, vast majority of customers are decent folks who enjoy the experience. I know a few that think of these women as objects, but most have a healthy respect for the providers,” said Dan, another client.