The Port of Newcastle in the Hunter region could house a hydrogen hub as Australia lays the groundwork for a transition into cleaner energy and to cut down emissions.

The federal government, through the Australian Renewable Energy Agency, will deliver $1.5 million to support a multi-million study into the hub’s potential in the Hunter region. Macquarie Group’s Green Investment Group, the Port of Newcastle and other partners will also form part of the study. 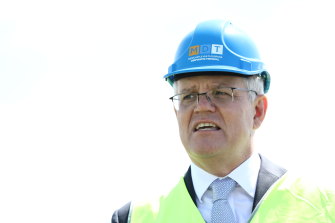 Prime Minister Scott Morrison said hydrogen was a “future fuel” that would be used domestically and internationally.

The study will consider the best location in the Port for hydrogen infrastructure, with Newcastle having great potential both as a local energy provider and exporter of clean hydrogen.

“The Hunter has gone through its fair share of changes over my lifetime,” Mr Morrison said at the Port of Newcastle on Monday. “And what’s really exciting is how the Hunter keeps adapting, keeps evolving, keeps seeing the opportunities that are ahead, but also maintaining that rich legacy of its history.”

Mr Morrison said the Hunter region was key to Australia’s future as a low emissions country that aimed to reach net zero emissions by 2050.

Port of Newcastle chief executive officer Craig Carmody said the port was the world’s largest coal exporter but diversification was essential to prepare for a low carbon economy.

“We know that diversification is not a nice-have, it’s a must do.” he said.

“We are already a leading global port in energy, we have the supply chains, we have the customers and we have the markets. So it makes sense for us to make this play.“

“It’s about supporting existing jobs and businesses while seizing the opportunities that the low emission economy creates.”

Monday’s announcement comes as Australia is emerging as a front-runner among nations vying to become hydrogen-exporting powerhouses amid fresh projections showing demand for the fuel could increase six-fold by 2050.

The federal government has announced a policy to reach net zero emissions by 2050, a target requiring Australia to reduce or offset all greenhouse gases over the next three decades. Under the policy, 40 per cent of emissions reduction will come from lower-emissions technologies, such as hydrogen, becoming cheap enough to compete with carbon-intensive industries.

For decades, the region’s high-quality coal has been the basis of a huge export industry, but as Australia’s biggest coal export markets — Japan, South Korea and China — commit to net-zero carbon emissions and shift towards clean energy, the mines of the Hunter appear to be heading for a slow decline.

Mr Morrison said Australia would achieve its net-zero targets by reducing the costs of alternative technologies and he planned on releasing the net zero modelling “soon”. 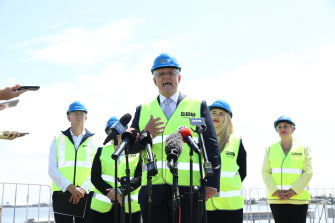 Prime Minister Scott Morrison said hydrogen was a “future fuel” that would be used domestically and internationally.Credit:Dominic Lorrimer

Energy and Emissions Reduction Minister Angus Taylor said the government was determined to reach the goal of producing clean hydrogen at a competitive price.

“This feasibility study will investigate the deployment of a 40 megawatt electrolyser, which would be four times bigger than the current largest electrolysers in the world,” he said.

Mr Taylor said the hydrogen industry would support more than 16,000 jobs by 2050, plus an additional 13,000 jobs from the construction of related renewable energy infrastructure.

“Australian hydrogen production for export and domestic use could also generate more than $50 billion in additional GDP by 2050. It’s a win-win,” he said.