At the beginning of February last year, 25-year-old Adrienne Reau was employed as a dancer with Carnival Cruise Line. When news of an infectious virus that could cause impending global disaster began to swirl, she was temporarily laid off and sent home to Tampa, Florida, to wait things out. Contemplating her next move, she turned to her wardrobe. Rifling through, she began to put together eccentric outfits, pairing an orange ruffled tube top with lilac pants, for instance, or complementing sparkly pink bell-bottoms with a “Viva Las Vegas” tank.

“Because of the pandemic, my style had a rebirth,” Reau says. She entered what she describes as a “creative renaissance,” putting together colorful, creative, and chaotic looks, then posting them on TikTok. Since then, she’s managed to grow her following from 2,000 to more than 65,000, she moved from Tampa to New York City, and she can earn what she made in a month as a dancer in a single day from a brand partnership. She describes her style as “Bratz Doll gone thrift shopping.”

If the pandemic has caused any single identifiable outcome for fashion, it’s that utilitarianism has been replaced with a spirit of experimentation. Gone are the days of sleek, edited “capsule wardrobes,” and in their place are drawers overstuffed with vintage treasures sourced from Poshmark or Depop. The unhinged energy of early pandemic dressing—exemplified by the Instagram account @wfhfits, where people pair batik skirts with tie-dye hoodies, or gray sweats with Chanel sandals —has crystallized into a distinct hunger for “dopamine dressing.” This burgeoning aesthetic is characterized by a cacophony of bright colors like lime green, International Klein Blue, and fuchsia worn together in a single outfit. 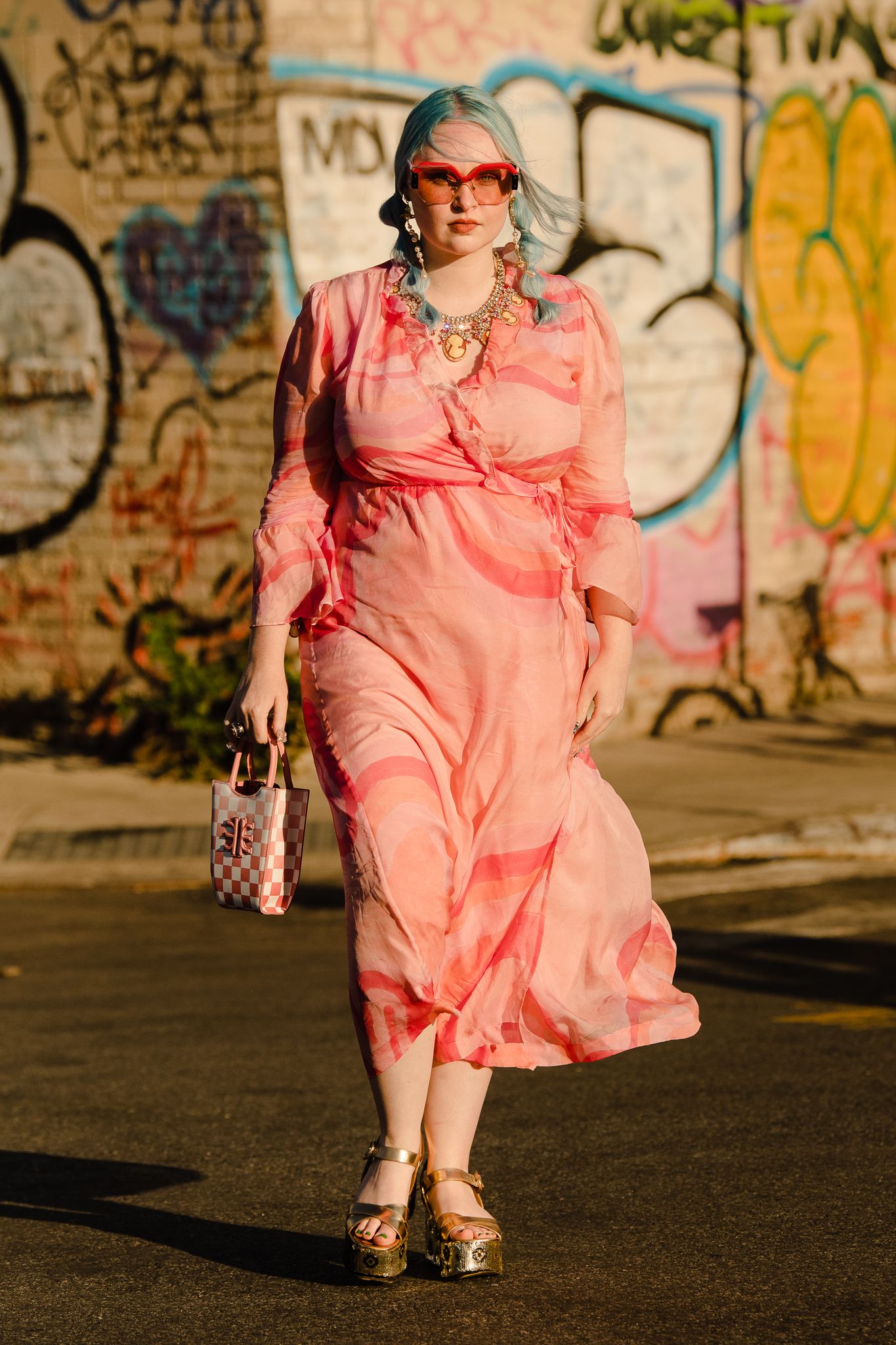 Whereas chic style used to be defined by wearing all black—think the ineffable cool of a woman smoking in black cigarette pants and a motorcycle jacket—the clothing that feels fresh now is a kaleidoscopic explosion of color. Minimalist brand The Row recently dropped a capsule collection of children’s clothes in rich jewel tones of sapphire, pumpkin, and magenta. Even Grace Coddington, the fiery-maned doyenne who once ran Vogue, reportedly dropped her all-black wardrobe in favor of color.

It appears as if black, a hue that once symbolized the height of sophistication—think Audrey Hepburn, classic cocktail dresses, and bohemian poets—has begun to lose its luster. An all-black wardrobe is no longer shorthand for a mysterious and brooding individual. (“I’ll stop wearing black when they make a darker color,” fictional ingénue Wednesday Addams said.) More and more, it telegraphs that a person is, well, old-fashioned. 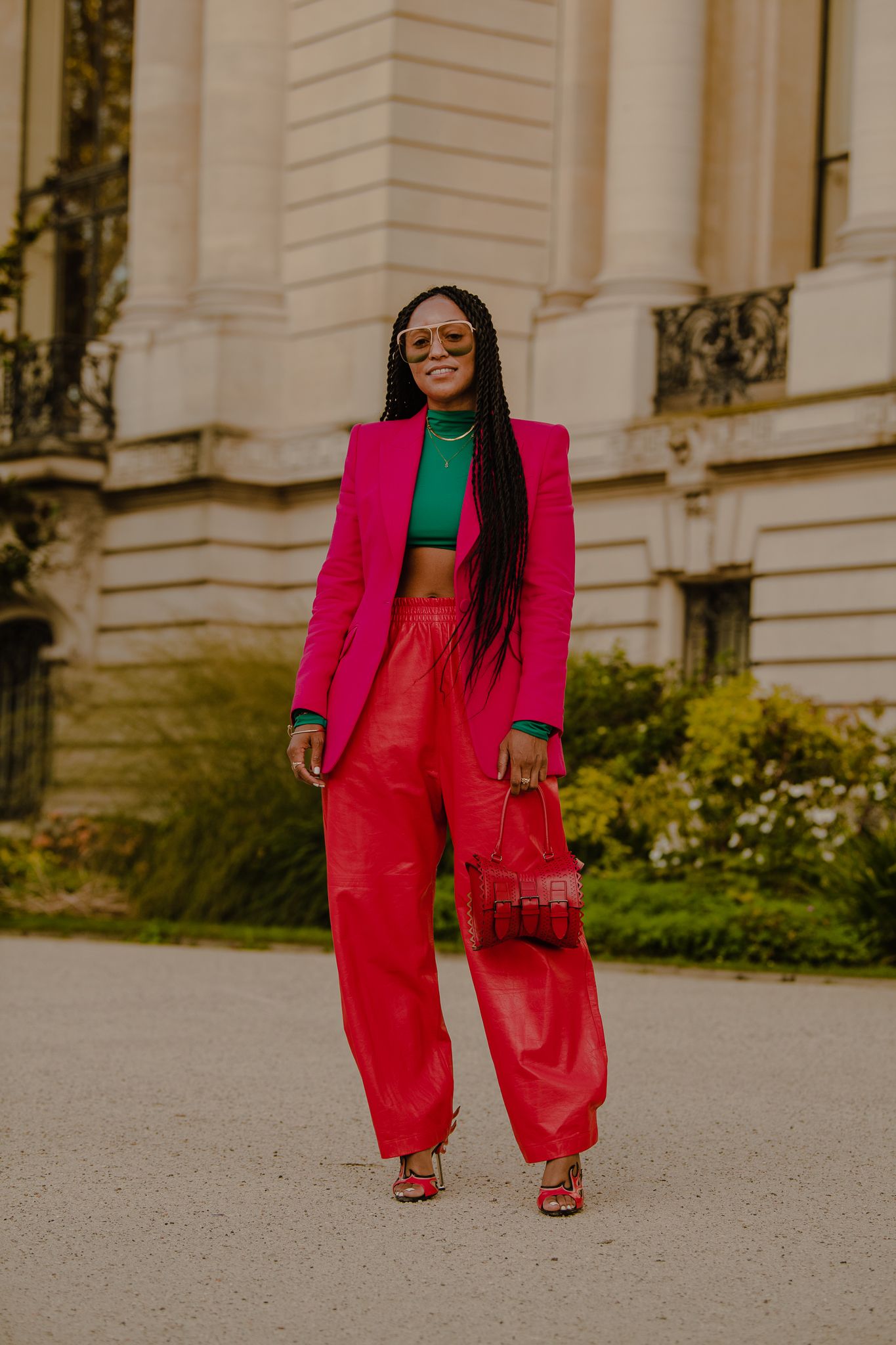 “I call it kidcore,” Melbourne, Australia-based content creator Maxine Wylde says, describing her propensity for orange two-piece suits and bright-green blazers. “We’re still in lockdown in Melbourne, and the one thing that’s gotten me through each day is getting dressed. Putting on a blue top and yellow pants just takes away from the situation I’m actually in.”

For Wylde, the decision to don bright colors is about bringing the “human element” back into fashion. The previous yen for minimalism, exemplified by The Row and Phoebe Philo’s Céline, was axiomatic in its declarations of simplicity. But the clothing also notably took itself extremely seriously. After a year of exhaustion, the need for joy has become imperative, and former Philophiles are relinquishing their minimalist wardrobes and embracing color. “When I look back at my Instagram and scroll back to before I made my [fashion] account, I think, Wow, was I just wearing jeans and a white T-shirt?” 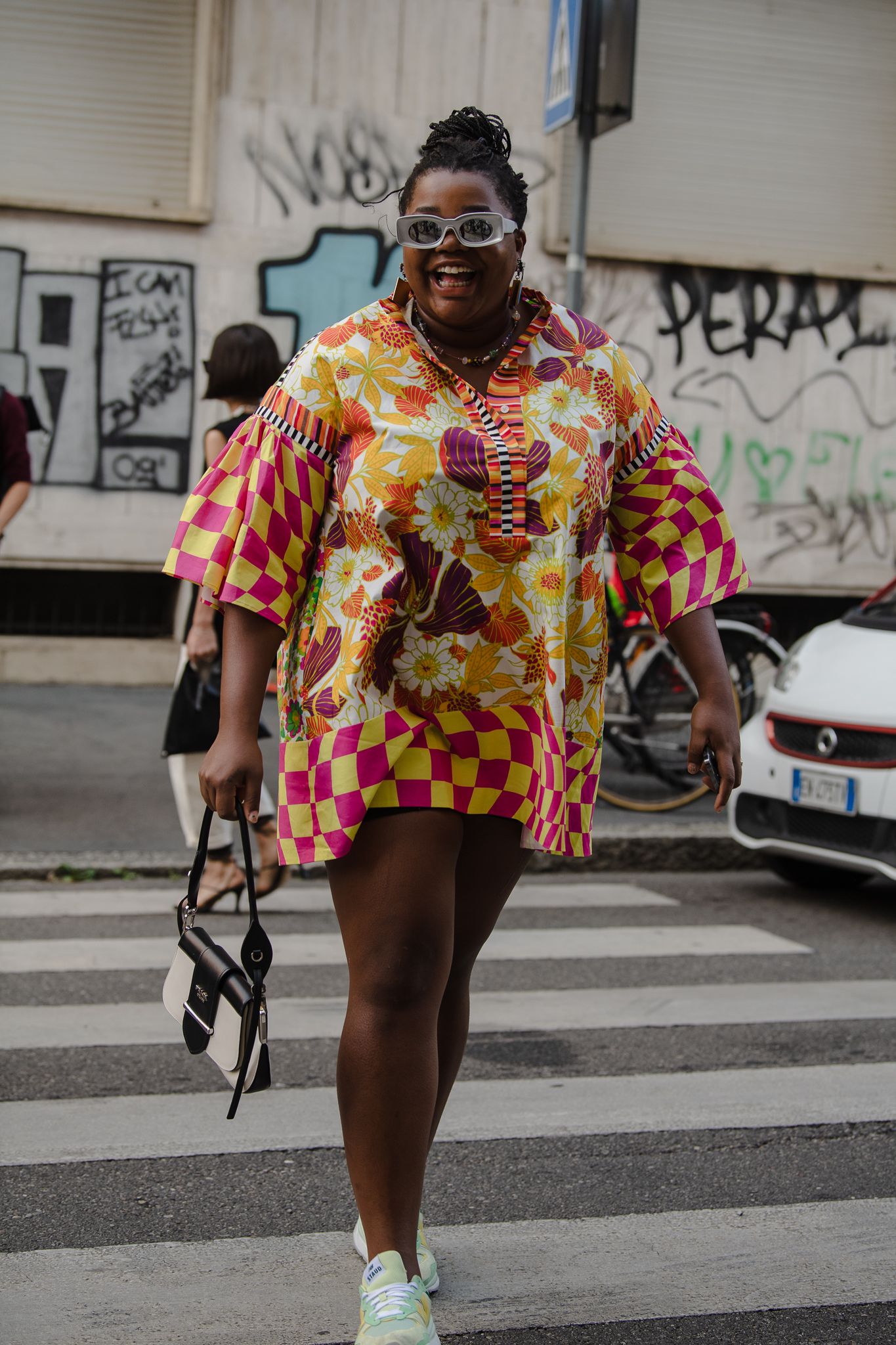 In April, The New York Times used the term languishing to define the collective feeling of “stagnation and emptiness” that had settled in after a year of living through a pandemic. At the risk of sounding obvious, piling on the most batshit-colorful items of clothing imaginable could be interpreted as a way of using visual stimuli to shock our nervous systems out of sameness and depression. After all, it’s difficult to imagine someone languishing in checkerboard pants.

Black tends to be thought of as ubiquitous in clothing, but it was reserved for eveningwear until the early 1980s, after the rise of Japanese avant-garde designers like Issey Miyake, Yohji Yamamoto, and Comme des Garçons, Philip Fimmano, a trend analyst and the creative director of Trend Union, says. For decades, a wardrobe heavy on black historically telegraphed a heightened sense of refinement and adherence to an unfussy strain of elegance. Until recently, it has become aligned with something else: uniforms.

“If you’re in a bar or a store, you’ll ask the person wearing all black for help,” Gregoria Reyes-Lou (a.k.a. @greivy), a content creator who describes pink as her “power color,” says. Currently, the ultimate expression of style is looking like an individual. Everyone wants to be the center of attention—a trait dubbed “main character energy”—and fashion has simply followed suit. No longer an arch expression of chicness, black has become inexplicably associated with the desire to disappear. 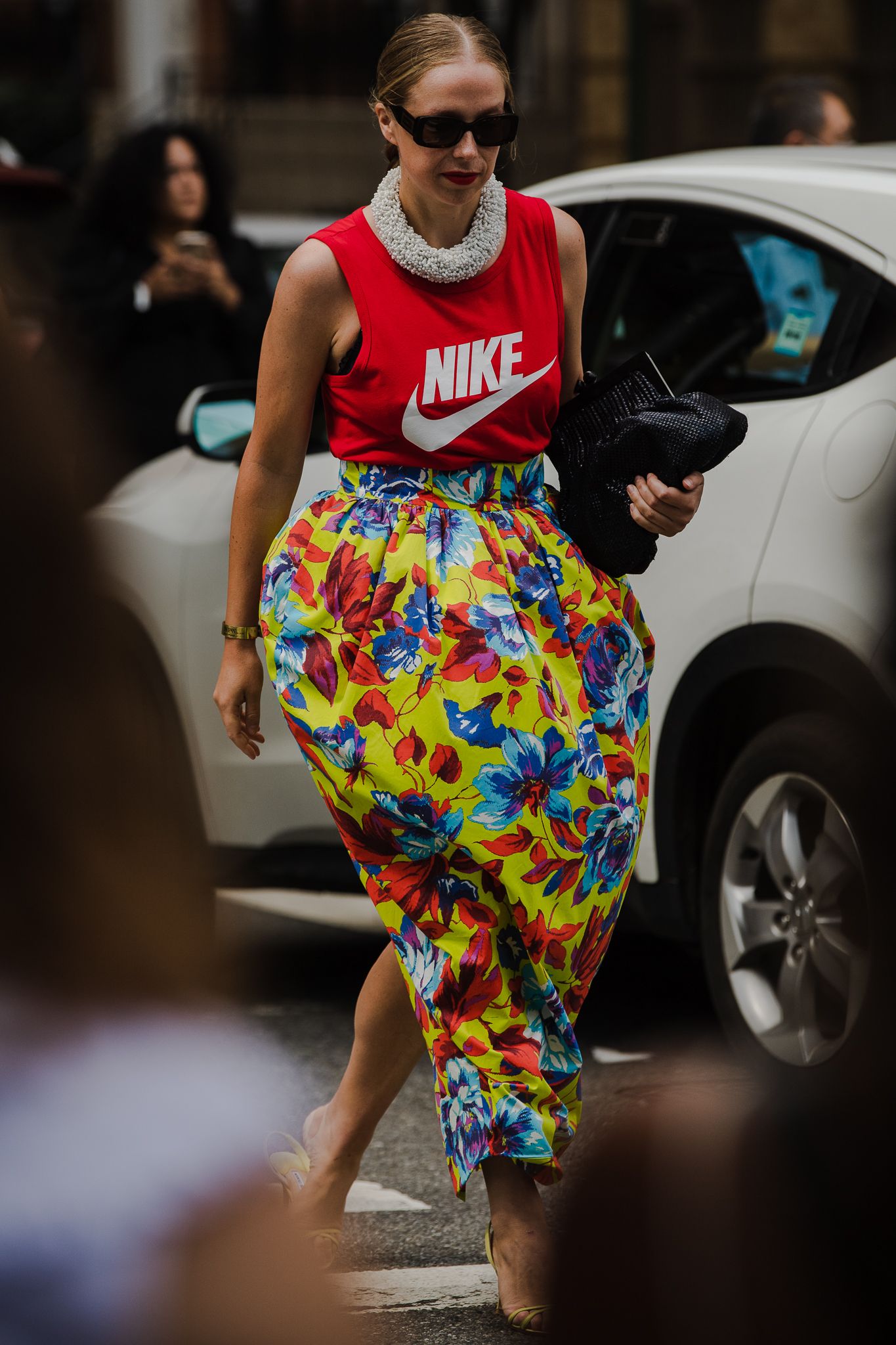 “When I see someone wearing all black, I don’t necessarily think of them as being stylish,” Reau says. Neutral clothing is easy to style and doesn’t present much of a challenge. Nowadays, the mark of the truly fashionable is the ability to marry clashing colors into a cohesive outfit. It’s not that black has fallen completely by the wayside, “I guess I just wouldn’t necessarily notice your outfit as much,” Reau says.

Noticeability is everything in the attention economy. “When you’re trying to show 15 looks in 15 seconds on TikTok, you’ve got to embrace color to stand out,” Casey Lewis, a Gen-Z brand consultant and author of the newsletter After School, says. “A black dress may look fantastic at dinner or on a date, but on TikTok or Instagram, a black dress is just going to look like a black dress. It’s not going to pop.” 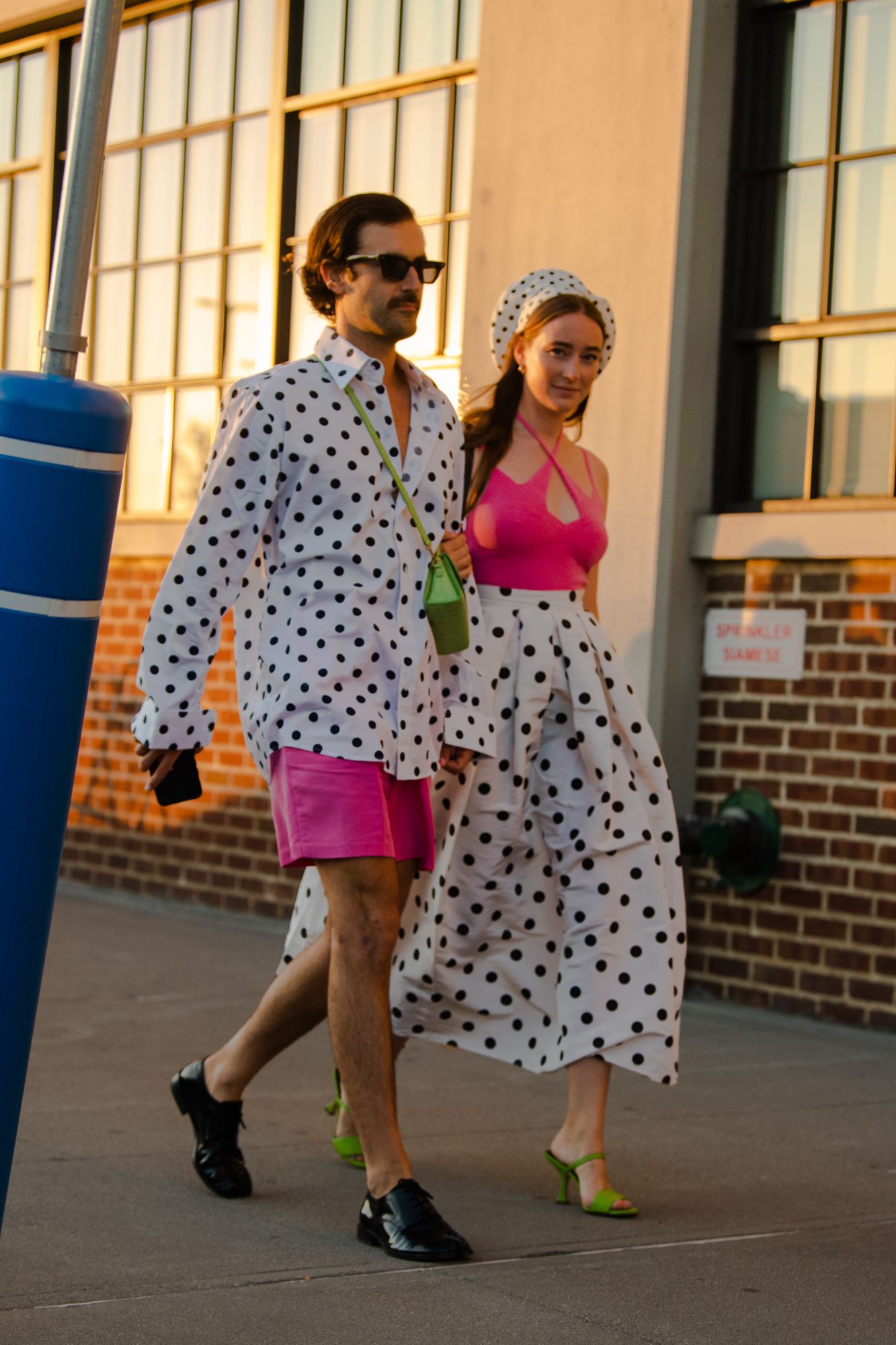 Michelle Norris, an Atlanta-based artist whose multicolored outfits include a pink ruffled crop top worn with trousers adorned with red, pink, green, and purple squiggles, suggests that the current passion for color is also an aspect of the democratization of fashion. “The only way you can pull off the all-black chic looks is when pieces are elevated and well constructed,” she says. Colorful clothes have a cheap and cheerful effect; they don’t have to be expensive to look good.

Ironically, the only way to reassert one’s individuality in a sea of color over time will be to wear … black. But Fimmano estimates that it will take at least another five years before we reach that point. “This trend still has a lot of growth before it will be over,” he says. “We’re going to need it to get us through the rest of the pandemic.”

For now, it’s best to embrace the small pleasures where we can and cling to the things that provide a small respite against the crushing sameness of the everyday. Bright colors are a balm for the senses—a conscious decision to embrace optimism in the wake of all that’s been lost.

“[When I wear color], it’s very welcoming. I feel like people can approach me and give me a compliment without being shy. It makes me happy that they’re happy looking at what I put together,” Reyes-Lou says. “Life’s a celebration, so why wear beige?”