Like the gangsters in The Irishman, Netflix and the film's exhibitors are pleading the Fifth around its controversial theatrical release, with a vow of silence meeting the film's box office fate.

Martin Scorsese's highly anticipated mob-inspired reunion between Robert De Niro and Joe Pesci opened at 11 Australian cinemas last Thursday ahead of its debut on Netflix later this month. But the streaming giant's policy of not disclosing viewership data, long maintained over its streaming content, has continued around its box office bows.

How much did Netflix's biggest theatrical release – over a decade in development, running three-and-a-half hours long and with a reported budget of $US159 million ($232 million) – make at the local box office? No one can or will say. 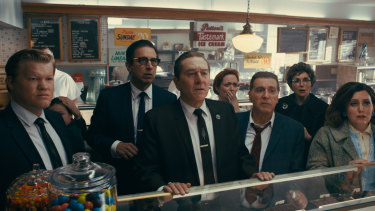 Martin Scorsese’s The Irishman is Netflix’s biggest film release yet, but you won’t be able to tell by the numbers just yet. Credit:Netflix

Because, at the request of Netflix, cinema tracking companies comScore and Numero haven't presented figures for the film, its earnings weren't included in the Motion Picture Distributors Association of Australia's weekend box office tally, which was topped by Last Christmas with $2.2 million.

A spokesperson for Netflix declined to comment, but confirmed the streamer's policy around not disclosing viewing data extends to its box office offerings. (Netflix also didn't release box office figures for its other more modestly-budgeted cinema releases, 2018's Roma and this year's The King.)

Overseas reports suggest The Irishman could have earned Netflix at least $100 million at the US box office if it had received a traditional release, a claim echoed by the film's Australian exhibitors – currently caught up in a civil war of sorts over the potential long-term effects of eschewing the industry's traditional 90-day theatrical release window for Netflix's briefer jaunts – who relay stories of sold-out sessions and enthusiastic cineastes. 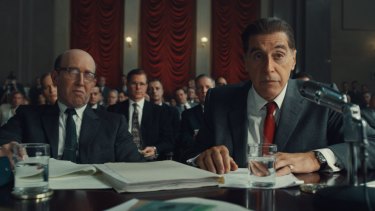 Al Pacino as Jimmy Hoffa in The Irishman.Credit:Netflix

A spokesperson for Dendy, the only cinema chain screening the film in Australia, confirmed The Irishman was their "best performing film for the weekend" but declined to disclose exact figures.

"As expected the film has resonated with our audience, many of whom do not have streaming platforms in their home," the spokesperson said, adding they looked forward to "similar success" with the coming theatrical runs of Netflix films Marriage Story and The Two Popes.

Alex Temesvari, general manger of Sydney's independent Hayden Orpheum, said the cinema's screenings of The Irishman were "extremely well-attended" and the movie was the theatre's "number one highest-grossing film for the weekend by a very wide margin".

"The Irishman has received an overwhelming response from our audience, most of whom are diehard cinema enthusiasts," said Temesvari. "They really embraced the opportunity to see such a high-profile and critically-acclaimed film on the big screen, where it clearly deserves to be seen."

The Irishman's box office results would mean little to Netflix, says Bruce Isaacs, Senior Lecturer in Film Studies at the University of Sydney.

"It doesn't matter, because it'll get a huge run on Netflix," says Isaacs. "I would love to understand the way [Netflix's] algorithm works, even around a show like Stranger Things – what constitutes a success or a failure? But it's going to be the same with cinema.

"They have their model and I don't think theatrical money means that much to them. If the movie opens across a month around the world with $100 million that's pretty good, but Netflix doesn't need that money."

The more significant impact, from Netflix's perspective, is sending a pointed message to the film industry.

"Making money back from theatres doesn't mean anything to Netflix. They are interested in, let's say within five years, being one of the main venues getting approached by major filmmakers to distribute their movies," Isaacs says.

"With the success of The Irishman, and how they provided Scorsese the money to make it when other studios had already turned him down, that's already an incredibly attractive model for other big-name filmmakers… This movie has had more word-of-mouth than anything Scorsese has done in a long time."

But without those traditional numbers – be it box office figures, or cinema attendees – how can we dissect whether the film's been a commercial success or a flop for the streamer?

"That's just it, it's impossible to see how it performs," says Isaacs. "You and I will never know. All we'll know is when we open up Netflix there will be a huge poster for it saying 'Martin Scorsese's The Irishman, watch now', and that's it… Netflix would obviously have a strategy for it but it's not around those [traditional] results; it's a completely new model."

If in a year's time Netflix are still interested in funding $US150 million epics by cinematic auteurs that would surely be our answer?

"Yes, absolutely and I don't even think we'll need to wait a year," says Isaacs. "If we find out next that Netflix have done a deal with, like a Christopher Nolan, then we'll have our answer – and really, that will be the end of cinema."

The Irishman is currently showing in Sydney at Dendy's Opera Quays and Newtown cinemas, Hayden Orpheum and Ritz Cinemas Randwick. In Melbourne at Classic Cinemas, Lido Cinemas and Cameo Cinemas. In Brisbane at Dendy's Cooparoo and Portside cinemas, as well as Dendy Canberra in ACT, with Perth's The Backlot. It debuts on Netflix on November 27.