If Jenna Patterson had earned her husband’s income, the family would have been able to access up to 18 weeks paid parental leave when she gave birth to twins 10 weeks ago.

But Ms Patterson doesn’t, and so her family, in effect, cannot. 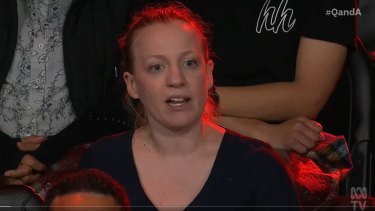 Jenna Patterson highlighted the inequality of paid parental leave when a mother earns over the threshold with her question to the Q+A panel. Credit:ABC

“I was the main income earner, so we decided that I’d go back to work and he would stay at home as the stay at home dad,” Ms Patterson said. “If my husband earned my income, and our roles were reversed, and I was on his income, staying at home, we would be eligible.”

The situation, which Ms Patterson described on Q+A on Thursday night, is caused by inequality in the rules of federal government-funded parental leave pay, which the show’s panellists agreed discouraged fathers from staying at home.

To claim parental leave pay, which is worth $753.90 a week, a birth mother needs to be taking time off work, earn less than $150,000 and be her child’s primary carer. A stay at home dad, like Mrs Patterson’s husband, can only claim the payment if it is transferred from his wife, even if he earns less than $150,000.

However, Ms Patterson earns more than $150,000, so neither is eligible.

(There is a separate government-funded payment for fathers and partners, but it only lasts for two weeks. Employers can also make their own parental leave schemes.)

Economics commentator Alan Kohler said the rules were a mark of gender bias and Liberal MP Fiona Martin said she had raised the issue with the Minister for Social Services and Families, Anne Ruston, to no avail.

“I agree with the lady that’s asked the question and I think that it should be changed, that we should have an even playing field between parents,” Ms Martin said.

“I didn’t get the response that I wanted [from Ms Ruston]. So I’m hoping to still change it and I’m confident that we should move in that direction because it should be a choice that parents make, which parent goes back to work.”

Labor’s spokeswoman for families and social services, Linda Burney, said her party in its national platform had committed to a “goal” of 26 weeks’ parental leave at full pay that could be split between both parents.

“It should not be gendered in the way it is at the moment,” Ms Burney said.

But when pressed by host Hamish McDonald, on what a “goal” meant, Ms Burney left clear wiggle room. “It means we haven’t come to a final position on it,” she said.