The booming Brig had Boris Johnson cowering: HENRY DEEDES watches as the Army is brought in to help run Covid-19 vaccine rollout

Parapapaaa! Sound the field trumpets, the cavalry’s arrived. Well, the Army at any rate – and not a moment too soon. Brigadier Phil Prosser of the 3rd Division was introduced at yesterday’s Downing Street press conference as the man in charge of rolling out the vaccine.

And thank goodness for that.

The Brig certainly inspired confidence. Towering over the Prime Minister, here stood a man who clearly Gets. Things. Done. Granite jaw. Thousand-yard stare. Haircut you could time your watch to.

Judging by his no-nonsense manner, I’d say a fair few corporals have felt the short sharp sting of his boot over the years.

Even Boris seemed to cower in his presence like a newly-thrashed mongrel. 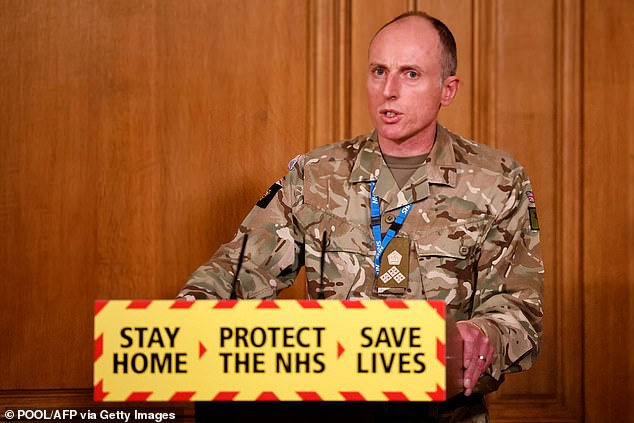 Action Man fatigues: Brigadier Phil Prosser (pictured yesterday) of the 3rd Division was introduced at yesterday’s Downing Street press conference as the man in charge of rolling out the vaccine.

In fact, I would not be altogether surprised if Brigadier Prosser had given the PM a swift cuff round the ear beforehand for insolence.

The Brig spoke as though briefing his troops on a night-time ambush: Operation Arm Puncture. ‘I am Brigadier Prosser, Commander, 101 Logistics,’ he boomed. ‘And my team are used to complex-IT-Y.’

His diction was so succinct it seemed to ricochet around the oak-panelled room like a stray bullet. Compared to the gasbag boffins we’re used to hearing, he used words as sparingly as emergency safety matches. Each sentence came perfectly formed and readily digestible.

He was dressed in Action Man military fatigues. ’Course he was. Probably took a quick yomp up Box Hill on his way into London.

He spoke of ‘executing his mission’ and of his aim to ‘deliver excellence’. 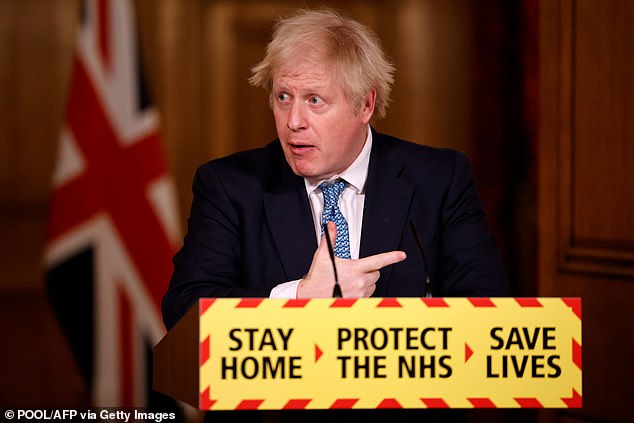 Before we heard from the Brigadier, Boris had given us an update on how things had been going so far. More than 1.5million people had now been vaccinated

The complex-IT-Y of this mission, Prosser said, was ‘unparalleled’.

To give us some idea of the scope, he compared the logistics of the past 30 days to setting up a new supermarket chain. Yet you could tell he was relishing every moment of it.

Before we heard from the Brigadier, Boris had given us an update on how things had been going so far. More than 1.5million people had now been vaccinated.

He promised ‘hundreds of thousands’ of jabs a day by next week. We were assured he was ‘throwing everything at it, round the clock if necessary’.

He then spoilt it by inviting ridicule as he attempted to pronounce the names of two rheumatoid arthritis drugs which have recently been identified as potentially effective treatments against Covid-19 – tocilizumab and sarilumab. The words flopped out of his rubbery mouth as ‘tossyleesymub’ and ‘sareeesumab.’ Hang on… weren’t they characters from aTolkien novel? 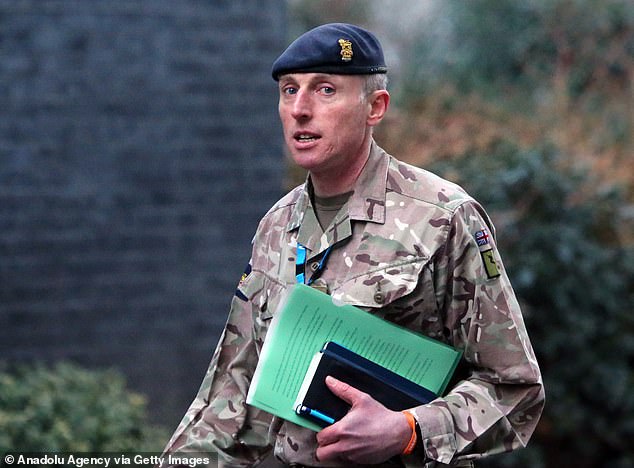 He spoke of ‘executing his mission’ and of his aim to ‘deliver excellence’. The complex-IT-Y of this mission, Prosser said, was ‘unparalleled’. Pictured: UK Army logistics commander Brigadier Phil Prosser arrives at 10 Downing Street

Joining the PM and the Brig was NHS chief executive Sir Simon Stevens. He’s the one who dresses like a banker. Suave beggar.

Not being a politician, he was able to boast that vaccinations in the UK were now running at 300 times the rate in France. If that didn’t earn him a drink at No10 later, nothing will.

Sir Simon explained how the vaccine would first be delivered by GPs, then by other ‘partners’. By this he meant the St John Ambulance staff, pharmacies – and the Army.

But by the tone of his voice, he did not sound altogether keen on these outsiders muscling in on his patch.

Call me naive, but if time is of the essence couldn’t volunteers be trained to help deliver what is a simple injection?

Earlier in the Lords, Tory peer Lord Blencathra pointed out that thousands of people routinely self-inject their medication every day.

Even I was capable of administering insulin jabs to my diabetic terrier. We’re not talking about splitting the atom here.

From the media there came the inevitable questions about Donald Trump and the events on Capitol Hill.

Boris replied that America had always stood for ‘freedom and democracy’ but the President was clearly wrong to carry on claiming he had won the election.

His voice was scratchy and irritable as he said this. He’d really wanted to focus on discussing the vaccine rollout.

This is high-stakes time now for the PM. No room for any cock-ups.

But, like the rest of us, he’s no doubt delighted to have the Brig on board.