The Saj glowed, Boris was as pink as taramasalata: HENRY DEEDES sees The Saj take aim at the ‘Cummings and goings’

Well, it was no knockout blow but it was certainly a decent jab to the sweetbreads.

Sajid Javid’s resignation speech to the Commons yesterday may have lacked Sir Geoffrey Howe’s verbal pyrotechnics against Margaret Thatcher, but it will have rattled a few Downing Street teacups all the same.

Modest, witty, stylishly courteous, the ex-chancellor’s ten-minute sermon was more of an elegantly crafted bomblet, designed not to destroy or maim, merely to leave the Number 10 furniture caked in soot.

It was a speech almost entirely devoid of malice or self-pity which, in essence, marked its potency. The ex-chancellor appeared dignified.

The Prime Minister, meanwhile, who is said to feel remorse about shafting friendly cove Saj, shifted and wriggled like a contorting ragworm. 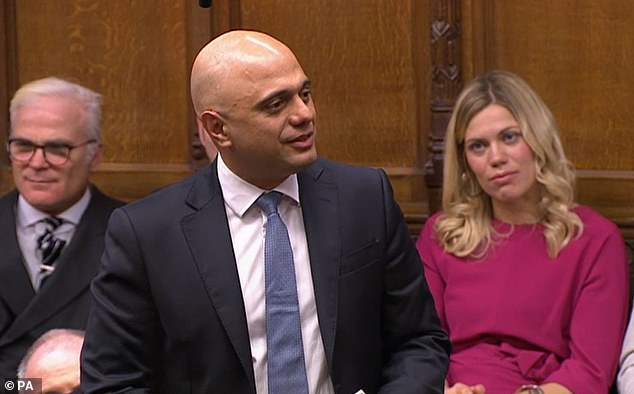 Sajid Javid’s resignation speech to the Commons yesterday may have lacked Sir Geoffrey Howe’s verbal pyrotechnics against Margaret Thatcher, but it will have rattled a few Downing Street teacups all the same, writes Henry Deedes

The Saj entered the chamber for the first time since his defenestration just as Boris was called for PMQs, hoping to draw as little attention to himself as possible. Fat chance.

As he made that long, unfamiliar walk to the backbenches all eyes fixed upon him. Stopping momentarily to say hello to Theresa May, he chose a sniper position several rows directly behind the PM, rather than Sir Geoffrey’s famous 45-degree vantage point.

When Speaker Hoyle called his name at 12.31pm the moment PMQs was done, the whole chamber, Prime Minister included, remained firmly in their seats.

Saj, flanked by his old University friend Rob Halfon (Harlow) and recently deposed transport minister Nus Ghani (Wealden), began by speaking warmly of the opportunities he’d had to ‘give back to the country that has given me so much’.

As talk turned to his resignation, Labour’s frontbench craned forward like a pack of llamas, thirsty for the juice. 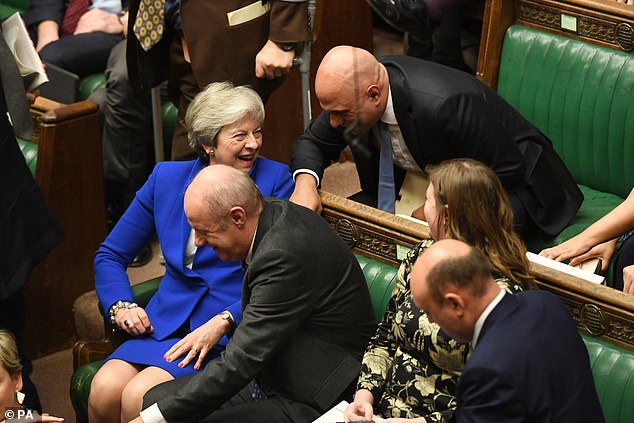 Stopping momentarily to say hello to Theresa May, he chose a sniper position several rows directly behind the PM, writes Henry Deedes

Mr Javid admitted he had been unwilling to accept the PM’s demand, supposedly at the behest of his senior aide Dominic Cummings, that he sack his team of advisors. Such a move, he said, would not have been in the national interest.

He did not wish to go into the personalities, apparently. Cue howls of disappointment. Boring! Though anguish quickly turned to laughter when Saj added: ‘The Cummings and goings, if you will.’

Shadow Chancellor John McDonnell, who had arrived especially to hear the speech, proffered a little round of applause. Jeremy Corbyn waggled a rubber-soled foot gleefully. Even Priti Patel afforded herself a little matronly titter.

Saj allowed himself a moment to drink the appreciation in, his acorn-shaped dome, which appeared to have felt the recent swipe of the barber’s razor, glowing with satisfaction.

Although not a natural speaker, he was remarkably composed. He seemed more languid, less robotic than usual. 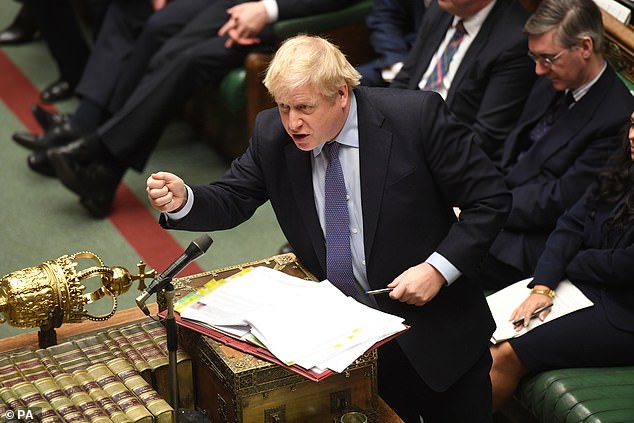 The Prime Minister, meanwhile, who is said to feel remorse about shafting friendly cove Saj, shifted and wriggled like a contorting ragworm (Pictured: Boris Johnson)

There were generous words for his successor Rishi Sunak, whom he had originally lobbied to be his deputy in the Treasury and then for him to remain during the reshuffle. ‘I didn’t quite get my way on that one,’ he joked. To finish, he issued a simple broadside at the PM: Cut taxes.

The Tory backbenches cooed with agreement. After months as the unwanted partner in this Government, Sajid Javid was having his moment.

Boris grimaced throughout, his complexion at times as pink as a pot of taramasalata.

Having spent the past two months walking on rose petals, those ten minutes were undoubtedly his least comfortable since the election.

As for PMQs, Jeremy Corbyn put in his best shift for years, focusing on the PM’s refusal to visit any of the regions affected by the recent floods. Corbyn boasted of visiting blameless Pontypridd.

The PM should do the same sometime, said Corbyn, rather than being a ‘part-time Prime Minister.’

He then advised Boris to stop hiding and ‘show people that he actually cares, or is he too busy going about some other business?’ Other business? Whatever could he mean?

Boris flapped around as though he’d turned up for a chemistry practical hopelessly underprepared.

My scorecard judged the bout a 6-0 win for Jezza, though I’m not sure the PM will care. Javid’s rapier-like turn will have discomforted him far more.