Jezza stepped up to land killer blow, then pffft! Nothing: HENRY DEEDES sees the Commons go back to school

Boris Johnson stood in the House of Commons last night with the frazzled look of a prize fighter awaiting the knockout.

In boxing terms, he was punch drunk, both eyes were swollen shut and he was nursing a couple of cracked ribs for good measure.

After his humiliation at the hands of the Supreme Court, all that was required was the simplest of blows to finish off. 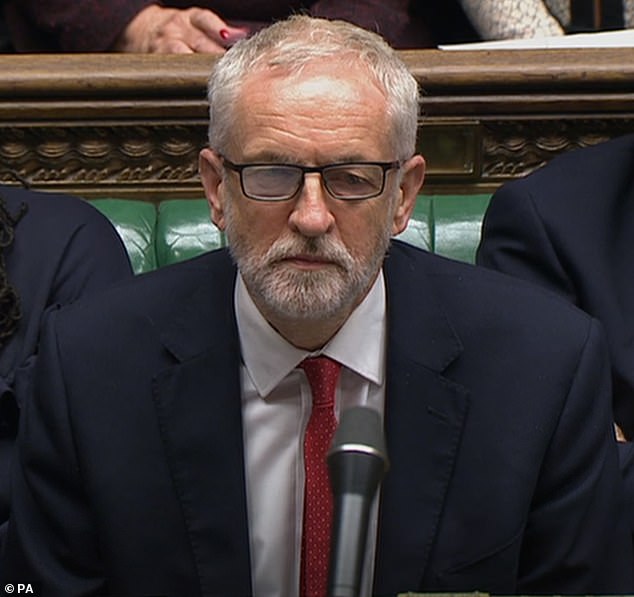 Boris Johnson stood in the House of Commons last night with the frazzled look of a prize fighter awaiting the knockout, writes HENRY DEEDES. But Jeremy Corbyn’s attempt at a knockout came to nothing

Up stepped Jeremy Corbyn. His knees creaked, his arms whirled, before finally…. pffffftt! Nothing. Jezza’s knockout jab barely even made contact.

Were anyone else leading the opposition, this dreadful week would surely have spelled the end for Boris.

Dragged back from New York to make a statement on his unlawful proroguing of Parliament, the PM appeared in the chamber at 6.30pm.

He’d landed earlier that morning, so presumably had enough time for a nap, shower – and perhaps a spritz of something musky around the gills.

Despite the jet lag, he produced a punchy statement. It was the usual stuff. Labour want to block Brexit.

They’re all cowards for not agreeing to an election. The newly convened House was rowdy. 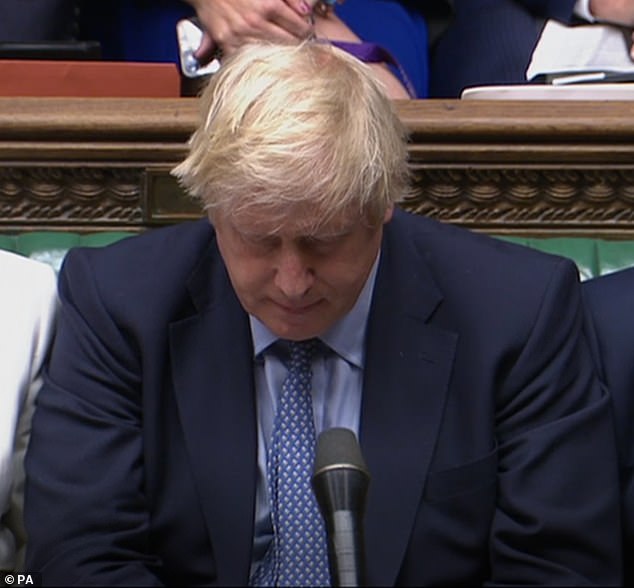 In boxing terms, Boris was punch drunk, both eyes were swollen shut and he was nursing a couple of cracked ribs for good measure

The chamber hummed the same way school assembly does on the first day of term.

‘You should be in jail!’ hollered one female Labour MP beyond my viewpoint. Then Corbyn was up on his tootsies.

Any normal person would have launched into a breathless diatribe on the Government’s week of shockers.

Instead, the Labour leader had a series of questions for the PM to answer. He sure does know how to lose an audience quickly.

Corbyn rambled, meandered and appeared to lose his place at one point. Within five minutes of speaking, the Labour benches had fallen silent. 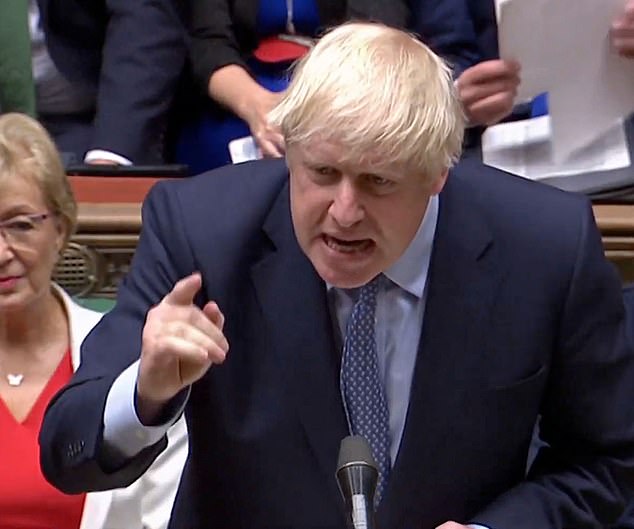 After his humiliation at the hands of the Supreme Court, all that had been required was the simplest of blows to finish off

Responding, the PM accused Corbyn of bottling an election on the orders of the ‘the Stasi’ – a reference to John McDonnell.

The shadow chancellor gave a puckish grin. By the time Boris had finished, the Government benches were applauding him.

On this, of all nights, he’d made Corbyn look daft.

It had been long first day back in the Commons. The liveliest session was an Urgent Question on the Attorney General Geoffrey Cox’s legal advice to the Queen on prorogation.

The Supreme Court’s decision was an embarrassment for Cox. He didn’t agree that it was cause for his resignation, but was aware a bit of humility was in order.

Yes, he respected the Court’s decision. Yes, the Judges were of utmost integrity. But still he had some early fast bowling to contend with. 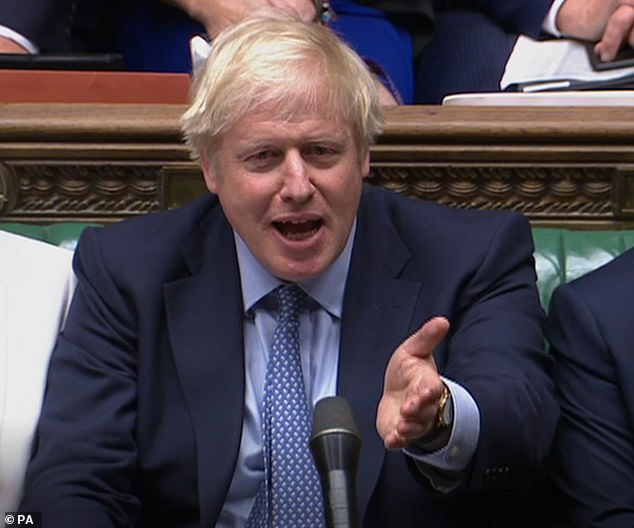 Were anyone else leading the opposition, this dreadful week would surely have spelled the end for Boris

Angela Eagle (Lab – Wallasey) then called on Jacob Rees-Mogg, who’d attacked the court’s decision, to be sacked. Once they were politely seen off, Cox decided to launch a counter attack.

This is a dead Parliament, Cox declared, referring to the Brexit deadlock. It should no longer sit. But the opposition was ‘too cowardly’ to call a vote of no confidence.

The opposition benches, Cox continued, were a ‘shower.’

This was too much for Barry Sheerman (Lab – Huddersfield).

Usually Barry is a benign figure. Irksome but benign. He lingers on the green leather the way bored pensioners wile away their time on park benches.

Rising to his feet, he went tonto – or at least, wanted us to think so. I detected a strong whiff of theatrics. 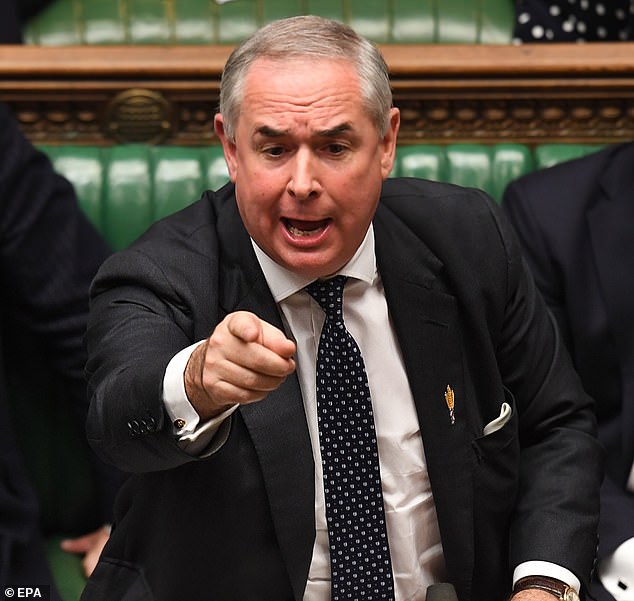 This is a dead Parliament, Cox declared, referring to the Brexit deadlock. It should no longer sit. But the opposition was ‘too cowardly’ to call a vote of no confidence

He accused Cox of spouting ‘barristers’ bluster’. Barry’s face went so red there was a real danger he might pop.

‘I am not sure I discerned a question in that marshmallow of rhetoric,’ Cox responded with lawyerly flourish. By now, Coxy was on the rampage.

Cox gulped the air for a nanosecond. ‘Words fail me!’ he scolded, demanding Lee face a by-election following his recent defection.

‘I think he should go on his knees to his constituents and beg forgiveness for his betrayal!’ Ghoulish Dr Lee looked as though he’d been slapped with a wet kipper.

There followed what appeared to be an opportunistic point of order from gamine goody-goody Emma Hardy (Lab – Hull West and Hessle) who objected to the AG’s jocular use during the session of the phrase ‘when did you stop beating your wife?’

Cox apologised, explaining it was an old legal expression to describe a loaded question.

Bercow, that great bastion of chivalry, warned members to be more careful about their use of language in future. It was like getting style tips from Stig of the Dump.