Facebook Dating is finally here, and it’s taking Facebook Official to a whole new level. The company introduced the new addition this morning, which allows any Facebook user who’s 18+ to create a dating profile separate—yes, Aunt Tilly won’t see you on it—from your main Fbook account. For free.

The social network’s new dating space (which is a tab that lives on the app itself next to your Events, Groups, Marketplace, etc.) works similarly to other dating apps in that you need to opt into it in order to use it and be visible to potential matches (who have also opted in). Then, the algorithm will suggest suitable singles for you based on your own preferences, interests, location, and mutual friends.

“Only your first name and age will come from your Facebook profile,” says Facebook chief privacy officer Erin Egan. “For all other information (such as your gender identity, who you’re interested in, photos, and more), you choose whether to share that on your dating profile. You can also choose if you share details such as your hometown, religion, occupation, and more.” 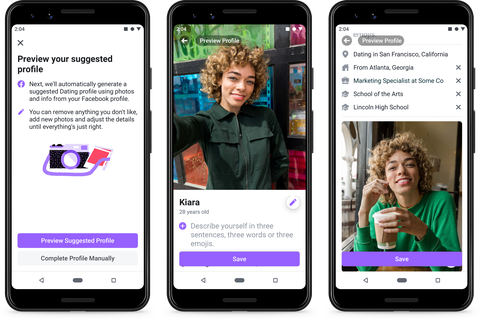 If you’re totally over swipe culture, good news: There’s none here. When you’re interested in connecting with someone, you can comment directly on their profile, or tap on a Like button to let them know. If you’re not into someone, there’s an “X” to hit to see the next person.

Now, before you start worrying if your brother, cousin, or ex is going to pop up, don’t fret: Facebook Dating only lets you match with friends of friends, not your actual Facebook friends. So, if you’re still crushing on your middle school lab partner, you can add them to your Secret Crush list—a special, private place where you can signify the people you like without Facebook Dating notifying them (think of it like writing down your crush’s name in your HS notebook). If they add you to their Secret Crush list too, Facebook will alert you both, and the rest can be romantic history. Let’s do this thing, Sexy Steve from middle school! 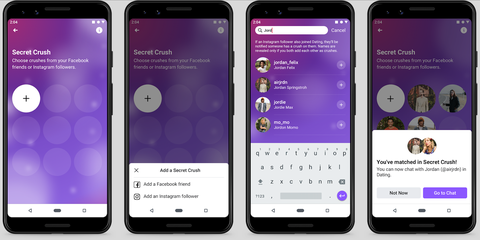 Here are some other cool features Facebook Dating offers:

I don’t know about you, but I’m totally sold on giving Facebook Dating a go. Perhaps it’s the app my single ass has always needed!